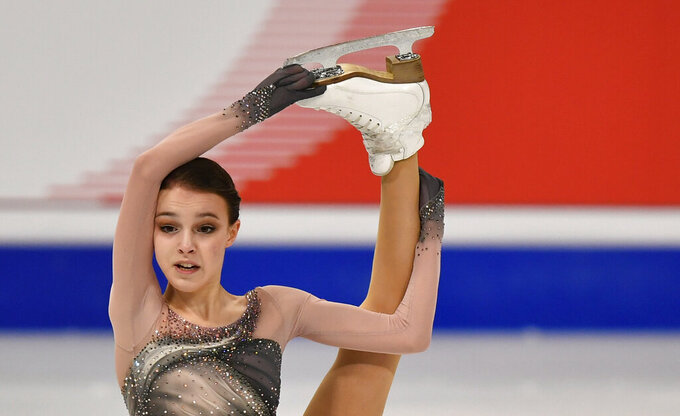 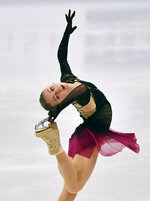 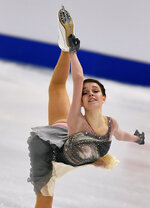 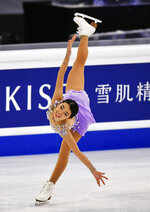 Yet the two American women did just enough to earn a third berth at next year's Olympics.

Elizaveta Tuktamysheva, the 2015 world champion, earned silver in her return to the event, ahead of Trusova. It was the second 1-2-3 finish in the modern era, matching the United States with Kristi Yamaguchi, Tonya Harding and Nancy Kerrigan in 1991.

This year's Americans got exactly what they needed to grab a third spot for the Beijing Games. Karen Chen, repeating her fourth-place showing of 2017 with exactly the same prize being sought, and U.S. champion Bradie Tennell, who was ninth, needed a total of 13 places or less.

"I feel like I’m a totally different person and skater from who I was in 2017,” Chen said. “In the past, skating was my everything and it still is my everything, but I just have a much better grasp of my life. ... I know that skating is something I truly love, and I want to give it my best at this moment in time.”

Even though she fell on two jumps, and two-footed a landing on another, Trusova won the free skate basically because of the unprecedented difficulty of her program, flawed as it was. Her presentation wasn't outstanding either, but Trusova became the first woman to land multiple quads at worlds by nailing two of the five she attempted.

That vaulted her from 12th to third and was a clear indication the judges favored technical bravery over artistic brilliance.

Shcherbakova had plenty of both, but seemed stunned as her marks revealed victory. She appeared to need confirmation from her coaches that the gold was hers.

“I really don’t know what to say now, after my performance, I felt that I really tried to do my best and tried to fight for every element,” Shcherbakova said. “It was a real fight for me, because from the first element, everything was not like I wanted and every (remaining) element I understood that I try to do my best on the element and not lose points.”

Chen scored a personal-best 134.23 in the free skate, but her overall total of 208.63, also a career high, didn't get her close to the podium. Still, the team reward was uplifting for the 2017 U.S. gold medalist.

Tennell's underwhelming performance dropped her to ninth. Tennell, who had some problems with her boots, cut short on a combination, under-rotated another jump and showed little spark.

Earlier, Russia extended its dominance at these championships when Victoria Sinitsina and Nikita Katsalapov took the rhythm dance. Already, the Russians have won pairs — they almost always do.

Sinitsina and Katsalapov were in front of U.S. champions Madison Hubbell and Zach Donohue by 2.10 points, with fellow Americans Madison Chock and Evan Bates exactly three points behind the leaders.

“We have to finish the work that we’ve already done, Sinitsina said. "We came here ready to show our best.”

All three duos were in top form.

The Russians flowed melodically through their “Singin' in the Rain” routine. They had upset four-time world winners Gabriella Papadakis and Guillaume Cizeron of France at last season's European Championships, an event not held this year.

Hubbell and Donohue, fourth at the 2018 Olympics and winners of two world medals, came in with a personal-best 86.05 to a mix of Christina Aguilera songs from “Burlesque.” He pumped his fist at the end of a strong program.

“We also realized this year was not going to be our typical season and the fans would not be in the stands, Hubbell said.

“And, for the most part, we would be performing for the judges and the skating community — and, of course, for the fans at home. But the people who were going to be there were these judges, who have committed a lot of their life and time into this journey with us, and we thought they might want to see something new from us.”

“It’s a very energetic program,” Chock noted, “and that kind of energy really creates buzz in the arena even if there aren’t that many people, and there was a really good vibe today."

Only in the rhythm portion of ice dance, with the same required patterns for every couple, could the music range from Broadway to Bee Gees to Blues Brothers, from “Grease” to “The Greatest Showman.” Yet it somehow worked, whether it was the Russians or Americans, Canadians or Brits.