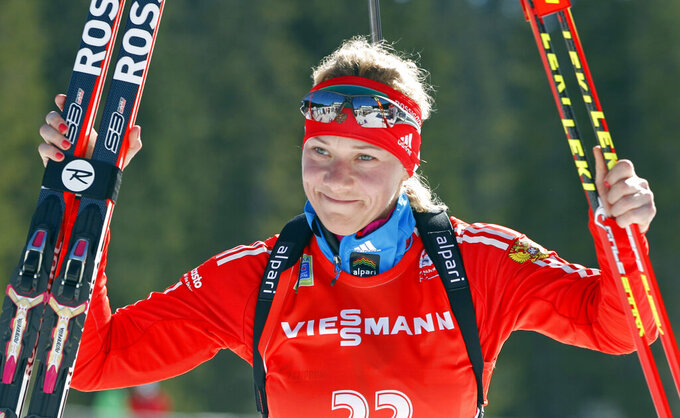 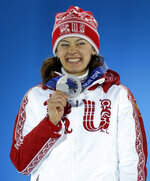 The Court of Arbitration for Sport said its judges upheld the International Olympic Committee’s disciplinary ruling of 2017, which used evidence against Zaitseva from Russian whistleblower Grigory Rodchenkov.

Zaitseva’s disqualification from all her Sochi events strips Russia of its silver medal in the women’s biathlon 4x6-kilometer relay. She won — and will retain — her gold medals from the same relay event at the two previous Winter Games in 2006 and 2010.

Her lawyer in Switzerland, Yvan Henzer, said Zaitseva would appeal the CAS ruling at Switzerland’s supreme court. The federal court typically only intervenes if legal process was abused.

Two of Zaitseva’s relay teammates at Sochi, Olga Vilukhina and Yana Romanova, won their appeals Thursday, and had their IOC disqualifications from individual biathlon events at Sochi overturned.

Vilukhina’s silver medal in the 7.5-kilometer individual sprint will be reinstated. Romanova had a best result of 19th in her individual events.

The court said its judges found “none of the acts alleged to have committed by these two athletes had been established to its comfortable satisfaction and beyond the mere suspicion” of doping.

All three biathletes have retired from competition.

The verdicts Thursday involved the last of the disputed 2014 Sochi Olympics medals affected by the Russian doping program that Rodchenkov revealed, and was investigated in detail by Canadian law professor Richard McLaren.

In 2016 after fleeing to the United States, Rodchenkov detailed how state authorities and agents helped swap pre-stored clean urine for steroid-tainted samples at the Sochi testing laboratory.

The IOC’s disciplinary panel — composed of three members of the Olympic body — examined Zaitseva’s case in 2017 and published a full written verdict of its evidence and reasons.

It said that “in autumn 2013, he (Rodchenkov) took part to a discussion with the athlete Zaitseva at the Ministry of Sports in Moscow,” where her doping use was discussed.

The IOC ruling noted Zaitseva’s name appeared on the so-called “Duchess List” of athletes scheduled to use a cocktail of steroids created by Rodchenkov while he was director of the Moscow lab accredited by the World Anti-Doping Agency.

In Sochi, bottles of Zaitseva’s urine contained excessive amounts of salt, which Rodchenkov alleged was to disguise the sample swap. Scratch marks on the glass also were judged to prove his claim of secure lids being forced open to allow the swap.

The three biathletes’ appeals were finally heard over two days at the Lausanne-based court in March. That was more than two years after other Russian doping cases from Sochi were heard urgently by CAS panels ahead of the 2018 Pyeongchang Olympics.

Then, 28 of 39 Russian athletes won their appeals against disqualification from the Sochi Olympics.

The biathletes’ appeal was backed by billionaire businessman Mikhail Prokhorov, who was president of the Russian Biathlon Union in 2014 when he also owned the Brooklyn Nets. Prokhorov also supported the athletes in a defamation case against Rodchenkov in New York.

The suit was described by Rodchenkov’s lawyer, Jim Walden, as an attempt to discover the whistleblower’s whereabouts while he is a witness protected by the United States.

Walden suggested Thursday that CAS acquitted two of the Russians “on such a flimsy basis, despite resounding evidence of sample tampering.”

"This proves, once again, that robust criminal enforcement of anti-doping rules by U.S. authorities is the last, best hope for clean athletes everywhere,” he said in a statement.

Lapshin has competed for South Korea since 2017, including at the Pyeongchang Olympics, and Glazyrina served a two-year doping ban until last February.

Those cases emerged through McLaren's work and data retrieved from the Moscow laboratory by WADA after years of being withheld by Russian authorities.