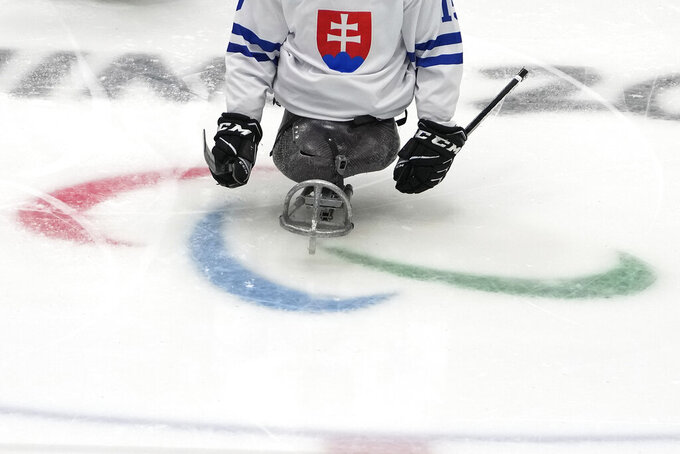 A Slovakian hockey player skates past the Paralympic logo during a practice session at the 2022 Winter Paralympics in Beijing, Thursday, March 3, 2022. In a stunning reversal, Russian and Belarusian athletes have been banned from the Winter Paralympic Games for their countries' roles in the war in Ukraine, the International Paralympic Committee said Thursday in Beijing. (AP Photo/Andy Wong)

BEIJING (AP) — The Russian Paralympic Committee will leave Beijing and has no immediate plans for legal action.

The RPC issued a statement Friday criticizing the decision to exclude Russian athletes from the Paralympics and said the move was "absolutely politicized.” It said its lawyers had determined that the Court of Arbitration for Sport would not be able to render a decision “during the accelerated proceedings.”

The RPC said it reserved “the right to apply to the appropriate international and national court” later at its own discretion. It said it was not “worthwhile at the current time to remain in Beijing" and planned to leave. The team is expected to fly out on Sunday.

The RPC also criticized International Olympic Committee president Thomas Bach, who earlier this week recommended that “international sports federations and sports event organizers not invite or allow the participation of Russian and Belarusian athletes and officials in international competitions.”

It said Bach's move lead “to the degradation and collapse of the world sport.”