Schauffele has big finish and 1-shot lead in Olympic golf 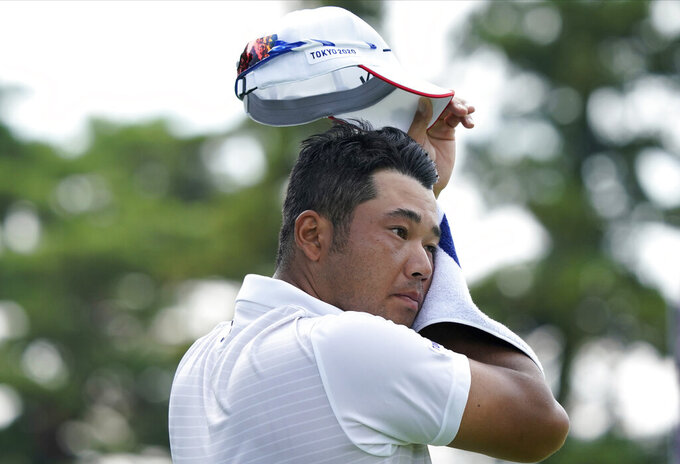 Hideki Matsuyama of Japan dries his sweat on10th hole during the second round of the men's golf event at the 2020 Summer Olympics on Friday, July 30, 2021, at the Kasumigaseki Country Club in Kawagoe, Japan. (AP Photo/Matt York) 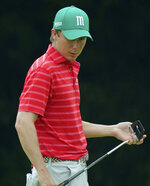 KAWAGOE, Japan (AP) — Xander Schauffele has been pointing to the Olympics ever since he began his rise into the elite of American golf three years ago.

Now that he's here, in the country where his mother was raised and enjoying an Olympic experience his father could only dream about, he is trying to treat this like any other week.

His play Friday indicated otherwise. Already with two eagles on his card, Schauffele surged into the 36-hole lead at Kasumigaseki Country Club by finishing with three straight birdies to tie the Olympic record with an 8-under 63.

He had a one-shot lead over Carlos Ortiz of Mexico, who is sharing a suite with a boxer and delivered a few good punches himself in a round of 67.

“I just got in a nice flow there at the end,” Schauffele said. “Kind of one of those situations where I wish I could play some more holes.”

There was no chance of that, for him or anyone else. For the second straight day, thunderstorms caused a delay of more than two hours, and another batch of lightning and heavy rain ended play with 16 players still on the course.

That included Hideki Matsuyama, the Masters champion and Japanese star who recovered from a pedestrian start and quickly worked his way into contention. Matsuyama was 6 under for his round — three shots out of the lead — and had a 5-foot birdie chance on the 17th hole when the round was suspended.

The players were to return at 7:45 a.m. to finish the round.

Also right back in the mix was the Irish duo of Rory McIlroy (66) and Shane Lowry (65), who were four shots behind Schauffele.

“The goal today was to sort of get back in touch,” said McIlroy, who was six shots behind first-round leader Sepp Straka at the start of the day. “I just wanted to get into contention going into the weekend and at least feel like I was still a part of the tournament. And I've done that.”

McIlroy previously sounded indifferent to the Olympics, which he skipped in 2016 at Rio de Janeiro. Once he arrived, he found himself already looking forward to Paris the next time. He can't attend other events, but McIlroy is glued to the TV.

“The one thing I’ve always wanted to go and see is dressage — always,” he said. “It's mesmerizing. And it's on tonight.”

The Olympics were a goal for Schauffele all along, particularly in Tokyo.

His grandparents still live here, and he made his professional debut in Japan. His father, Stefan, was a decathlete invited to a training camp in Germany. On his way there at age 20, his car was struck by a drunk driver and he lost his left eye, among other injuries.

But there's no need to think ahead to what a gold medal — any medal — would mean. Schauffele, whose last official victory was at the start of 2019, has been too caught up in that.

“Obviously, you get to take home something a little bit more special than money, what money can buy,” he said. “So maybe if you keep thinking about it, it might become more special. But to me, this is just another golf tournament.

“I've been pressing pretty hard for quite a little bit of time to win a golf tournament, to be completely honest,” he added. “There was a point today where I was starting to get a little impatient and I had to remind myself back to the times I did win, and the times I've been watching other people win. They seem to be pretty patient and staying in the moment.”

Schauffele was at 11-under 131, right where he wanted to be, thinking of little else.

He got there in part with his two eagles. One came at the par-4 sixth hole, where the tees were moved forward because so much of the fairway was soaked from rain the previous day. He hit a 3-wood to 10 feet. And on the par-5 14th, he blistered a 3-wood from 296 yards to the front of the green and holed a 45-foot putt.

Ortiz also took advantage of the forward tee on No. 6 by hitting driver to 18 feet for eagle, though his birdies ran out after the 11th hole.

As much fun as he's having on the course, the good stuff is back at the Olympic Village. Ortiz is among players who don't mind the 90-minute commute in exchange for hanging out with all the other athletes. The sleep it's costing him is not all about the commute.

He is sharing a suite with light heavyweight Rogelio Romero.

“The other day he finished his fight. I'm waking up at 4 a.m., he's coming back at 11 p.m., getting in the ice bath, waking up everybody,” Ortiz said. “He's like: ‘I’m so sorry, I'm still running on adrenaline. I'm just trying to calm down.' You wouldn't get that anywhere else. It's fun. I've loved it so far.”

Romero was to fight again Friday night. Ortiz has played well enough that he can at least sleep in.