Shaun White all but wraps up spot in his 5th Olympics 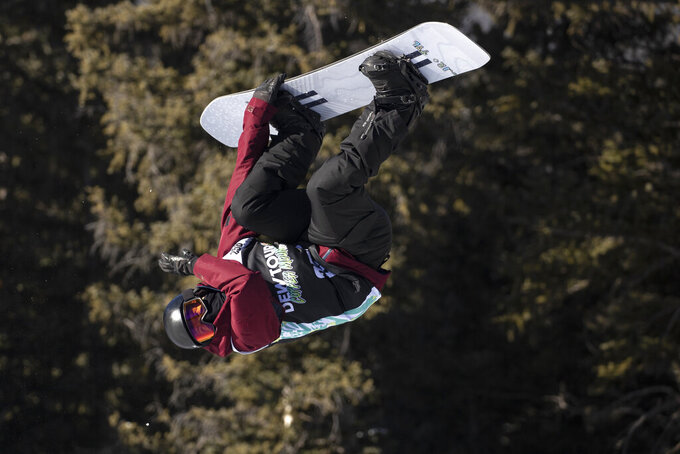 FILE - Shaun White, of the United States, executes a trick in the snowboarding halfpipe finals, Sunday, Dec. 19, 2021, during the Dew Tour at Copper Mountain, Colo. Shaun White is likely heading to the Olympics for a fifth time. For the first time, the snowboarding star and three-time gold medalist on the halfpipe won't be the favorite. (AP Photo/Hugh Carey, File)

LAAX, Switzerland (AP) — Shaun White all but wrapped up a spot in his fifth Olympics on Thursday when he qualified for the finals of a contest in Switzerland and his nearest American pursuer failed to move on.

White finished fifth in the qualifying round, while Chase Blackwell failed to make it to Saturday's 12-man final.

It means White, who came into the event as the fourth-ranked American in the World Snowboard Points List, cannot fall further down in that ranking, while Blackwell, who was fifth, cannot move up. The U.S. has four spots on the men's halfpipe team and is expected to use those rankings to fill out the last three spots.

Taylor Gold has already secured a spot with a podium finish at a qualifying event in Colorado last month. Chase Josey and Lucas Foster are also in line to earn spots.

White can still use Saturday's final to build confidence. It's a final that will feature the top three finishers from the last Olympics — White, Japan's Ayumu Hirano and Australia's Scotty James.

White is in pursuit of his fourth Olympic gold medal. However, his lead-up to the Beijing Games has been rough. He was diagnosed with COVID-19, the lingering effects of which forced him to pull out of last week's qualifier in Mammoth Mountain, California. Earlier, a broken binding hampered his run at the Dew Tour in Colorado.

He made a last-minute decision to travel to this week's World Cup event in Switzerland, which is the last contest before coaches pick the U.S. team. The team is expected to be chosen next week and finalized no later than Jan. 21.