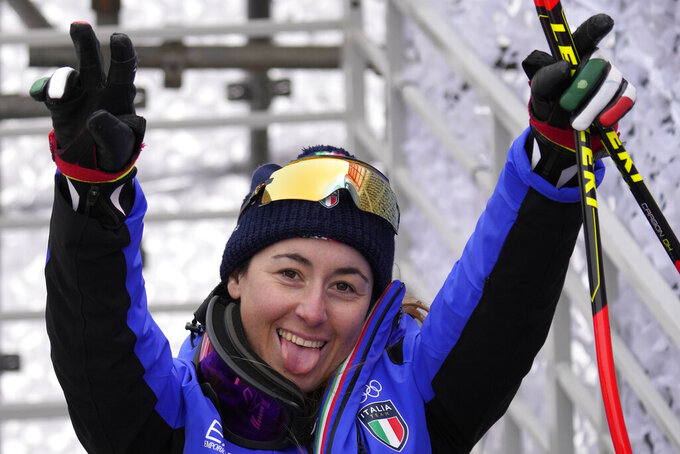 Sofia Goggia of Italy reacts as she leaves the finish area after women's downhill training at the 2022 Winter Olympics, Saturday, Feb. 12, 2022, in the Yanqing district of Beijing. (AP Photo/Luca Bruno)

BEIJING (AP) — For ski racers as talented and successful as Mikaela Shiffrin and Sofia Goggia, the first of three scheduled downhill training runs would not be a significant event under normal circumstances, even at an Olympics.

Their trips Saturday though fog and the occasional flittering snowflakes were vital, though. For Shiffrin, because she still isn't sure whether she'll enter the downhill on Tuesday. For defending champion Goggia, because she hasn't competed since badly injuring her left knee and leg in a crash on Jan. 23.

“Today gives me a little bit more positivity,” said Shiffrin, a two-time Olympic gold medalist from the United States who didn't finish her first runs of the giant slalom Monday or the slalom Wednesday at the Beijing Games, then was ninth in the super-G on Friday. “I would love to race this downhill, so that’s the plan. But ... we’re going to have to see how things go as the days progress.”

She was not pushing herself to the utmost level — no reason to, for what amounts to a practice session — and her ultimately inconsequential time of 1 minute, 34.80 seconds was ninth-fastest among all 46 starters, fifth-fastest among those who didn't miss a gate.

“It felt strong and solid. And I was in a good position,” said Shiffrin, who had not trained, let alone raced, on downhill skis since finishing 38th in the World Cup stop at Lake Louise, Alberta, on Dec. 4. “It was never scary at any point and just a little bit of that exhilarating feeling.”

Goggia was 0.14 seconds behind Shiffrin amid the first natural snow to fall at the Yanqing Alpine Skiing Center since competition in Alpine skiing began last week.

Goggia was supposed to carry Italy's flag in the opening ceremony but delayed her arrival in China to try to rehab and get ready to ski after partially tearing a ligament in her left knee and sustaining a “minor fracture” in that leg, along with tendon damage, during a super-G at Cortina d'Ampezzo.

The day after her injury, she thought there was no way that three weeks later she would be out on the slopes.

If not for being hurt, she would have been an overwhelming favorite to collect another gold. Consider: Goggia has won the last eight World Cup downhills she finished, a streak that began in December 2020.

She couldn't bear the thought of not trying to defend her title, not getting at least a chance to return to the Olympics and give it a shot.

After her first trip down a course known as “The Rock,” she lifted her ski poles to her helmet, looked skyward and smiled.

Speaking with reporters in Italian a little while later, she kept using the same word, over and over: “bellissima” — meaning "very beautiful.”

As in: “I felt that ‘bellissima’ sensation of the downhill.”

Or: “An Olympic downhill ... for me, is the most 'bellissima' thing that exists.”

Other than when landing one jump, she said, she didn't really feel much in the way of pain in her knee, which was wrapped with a compression sock and athletic tape.

“I’m happy that, at the start, I wasn’t afraid," she said. “I wasn’t overwhelmed by terror, which I thought might be the case during the days leading up to it.”

Her competitors, Shiffrin among them, were happy to see Goggia back at it.

“She’s probably the toughest person I ever met. She just skied smart. She skied smooth. She looks,” Shiffrin said, “like Sofia Goggia.”