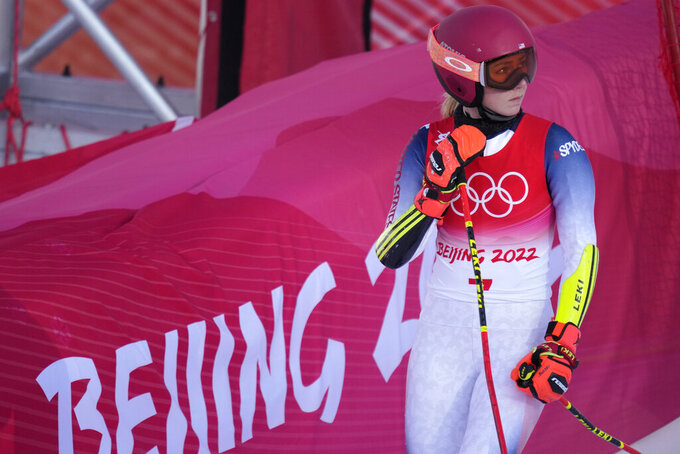 Mikaela Shiffrin of United States leaves the course near the finish area after skiing off course during the first run of the women's giant slalom at the 2022 Winter Olympics, Monday, Feb. 7, 2022, in the Yanqing district of Beijing. (AP Photo/Luca Bruno)

BEIJING (AP) — Maybe this “huge disappointment” — her words upon missing a gate early in the first Alpine race at the Beijing Olympics — will serve Mikaela Shiffrin well moving forward.

Maybe, just maybe, after describing her approach to the turn that ended her 2022 Games debut as “almost anxious,” this unusual mistake will help Shiffrin take stock of things and head into her next event, Wednesday’s slalom, and the ones after that, with a fresh mind, renewed enthusiasm and a strong sense of what went wrong.

“There’s a lot of questions that will be asked,” the two-time Olympic gold medalist from the United States said Monday, when her 2018 Pyeongchang title defense in the GS ended after about 10 seconds. “And I think many people are going to say, ‘What went wrong this entire time?’”

So before she heads back out on a course known as The Ice River, one that none of the world’s elite racers had ever been on until this trip to China, it could be instructive to look back to what happened the last time Shiffrin failed to finish a giant slalom.

That was — get this — four years, and 30 races, ago, all the way back on Jan. 23, 2018, in the Kronplatz World Cup stop at San Vigilio di Marebbe, Italy. And that, it turns out, came just two days after she missed a gate in a super-G in Cortina, Italy.

During an interview with The Associated Press on the day of that GS error, Shiffrin reflected in a strikingly similar way about what “people” might be thinking. Back then, this is what she said: “I can see it in my mind: ‘Mikaela Shiffrin faltering before the Olympics.’”

Later in that conversation at the team hotel with AP reporter Andrew Dampf, Shiffrin settled on the way she wanted to process what was going on as those Winter Games approached, drawing this conclusion: “Today is just a lesson to remember that nobody is invincible.”

And how did everything turn out then?

Shiffrin wound up leaving Pyeongchang with two medals: the gold from the giant slalom and the silver from the combined, to go alongside her slalom gold from the 2014 Sochi Games.

One more gold would give her an American-record three in Alpine skiing.

She could have as many as four more individual races left in Beijing. So looking ahead was where she wanted to put her focus Monday after a hug from her mom, Eileen, who also helps with coaching, and a chat with her boyfriend, Aleksander Aamodt Kilde, a Norwegian who was fifth in the downhill.

Part of what was so surprising about the way the GS ended is that Shiffrin is a skier marveled at by other skiers because of how perfect her form is and how infrequently she falters.

“A textbook of skiing technique,” is the way double Olympic gold medalist Ted Ligety puts it.

“It’s her approach, her understanding, of how to get from Point A to Point B quickly enough to win without taking any undue risk,” explains six-time Olympic medalist Bode Miller.

Shiffrin pointed out just how much work she does put in to avoid the kind of flub that derailed her Monday, when she came through a bumpy turn, couldn’t quite recalibrate properly and ended up sliding on her left hip and hand until it was too late to recover.

The 26-year-old from Colorado also brought up some of the setbacks she dealt with during the run-up to Beijing.

There was the back issue that prevented her from practicing properly from late October to early November. The bout with COVID-19 in late December that forced her off the slopes for more than a week.

“We can go to a lot of different places during the season where we can put the blame,” she said. “But I think the easiest thing to say is that I skied a couple of good turns and I skied one turn a bit wrong and I really paid the hardest consequence for that.”

“And now,” she added, “we have to move forward, because there’s a lot still to come the next weeks.”

And there are plenty of people — most notably, her competitors — who would expect nothing less than a top-of-her-abilities Shiffrin the next time out.

“I think she will rise up again,” said Ragnhild Mowinckel, a Norwegian who took the silver behind Shiffrin in the Olympic giant slalom four years ago, “and she will probably nail the slalom.”