Shiffrin's Slovakian rival has big plans for the Olympics 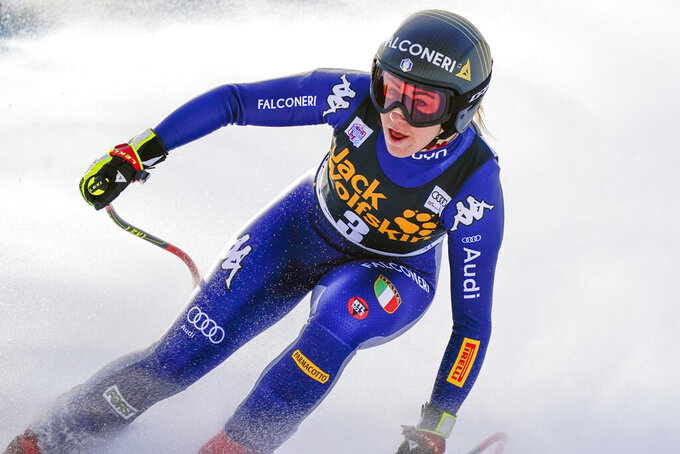 BEIJING (AP) — Mikaela Shiffrin isn’t the only Alpine skier who could enter all five individual events at the Beijing Olympics and come away with multiple medals.

Petra Vlhova, the tall Slovakian who is Shiffrin’s biggest rival, has big plans of her own for the Winter Games.

“We go there for medals,” Mauro Pini, Vlhova’s new personal coach, said in a recent interview.

Vlhova already won the overall World Cup title last season — considered by many the greatest prize in skiing — and has collected six medals from world championships. Now, she’s aiming for her first medal in her third Olympics.

“This is perfect,” Pini said. “The first time you go (to an Olympics) you are lost, the second you learn and the third you are ready to perform.”

Vlhova is a medal contender in at least three events. She already secured this season’s World Cup slalom title by winning five of seven races — with Shiffrin, who was slowed midseason by the coronavirus, winning the other two.

While Pini said they “will see” whether Vlhova enters the downhill, she also plans to race the super-G and could take part in the team event.

Vlhova already raced in all six Alpine events at the 2018 Pyeongchang Olympics.

It was after Pyeongchang, though, that Vlhova established herself at the top of the sport.

Securing the overall title last season was so important to Slovakia, an eastern European nation of 5.5 million, that she was flown on a government plane to late-season races in Are, Sweden, to lighten her travel load. Then she was feted at the presidential palace after winning the big crystal globe.

A first-ever Olympic medal for the country in Alpine skiing would be cause for more celebration.

“I’m sure that the whole country will (follow) Petra,” said Pini, who is Swiss. “Obviously there is something beyond her. … We feel this.

Vlhova was the only skier who started in all 31 women’s World Cup events last season. This season, she’s been racing mostly giant slalom and slalom and competed in only one speed weekend — in Altenmarkt-Zauchensee, Austria, last month.

Pini said Vlhova felt “destroyed” at the end of last season and that her schedule was too demanding.

“And if you look at the overall classification, we have more points now with less races as last year,” Pini said. “This is a big, big difference.”

Pini, who formerly coached Lara Gut-Behrami and Tina Maze, was hired by Vlhova after she split with her longstanding coach, Livio Magoni, following unflattering remarks by the Italian about Vlhova.

Pini noted how by prioritizing their best events and adding more rest into the schedule, Vlhova is able to steadily improve throughout the season rather than just clinging on to the form that she began the season with. For example, Pini said Vlhova is now “more disciplined” with her upper body when she races — which makes the 5-foot-11 (1.80-meter) skier much more efficient.

“We’re trying to manage perfectly the details. Manage the time to have more time,” Pini said. “It’s important to have time to recharge — to rest and to have fun. So then there’s also time to laugh.”

Vlhova isn't the only contender on the slopes of Yanqing, where the competition opens on Sunday with the men's downhill.

Nobody would have been a bigger favorite to win gold in downhill than Sofia Goggia had the defending champion from Italy not crashed last month.

Now, though, Goggia faces a race to recover from a sprained left knee, a partially torn cruciate ligament and a “minor fracture” of the fibula in her leg — plus some tendon damage — following her fall on home snow in Cortina d'Ampezzo.

Goggia is still planning on flying to Beijing and competing but her condition remains an open question.

Goggia has won the last eight World Cup downhills that she completed.

A medal in Beijing would enable Goggia to honor the 6,000 people who died from the coronavirus in her hard-hit city of Bergamo.

Kilde has been a force in both downhill and super-G on the World Cup circuit this season, winning three races in each discipline.

A former overall World Cup champion, one of the few things that Kilde has not won is a medal at a major championship.

After his overall title in 2019-20, Kilde had last season cut short when he tore his ACL during a training crash in January.

The Norwegian is dating Shiffrin.

If Goggia isn't in top form, Gut-Behrami could be the woman to beat in downhill — and super-G, too.

The Swiss standout was once a teenage prodigy who was expected to win everything in skiing. She cried in disappointment after taking the bronze medal in the downhill at the 2014 Sochi Games and is still seeking her first Olympic gold.

Now 30 and married to Swiss soccer player Valon Behrami, Gut-Behrami had the performance of her career at last season's world championships in Cortina d'Ampezzo, Italy, when she won two golds and a bronze.

“She's more at ease now,” said Pini, her former coach. “When she wants to achieve something she does great.”

If Goggia was a lock in downhill, Marco Odermatt is nearly as big of a favorite in giant slalom.

The 24-year-old Swiss skier is leading the overall World Cup standings, has won four of the five GS races this season and finished second in the only race he didn't win.

Odermatt, who swept five golds at the 2018 junior worlds, is also quickly developing into a force in downhill and super-G.