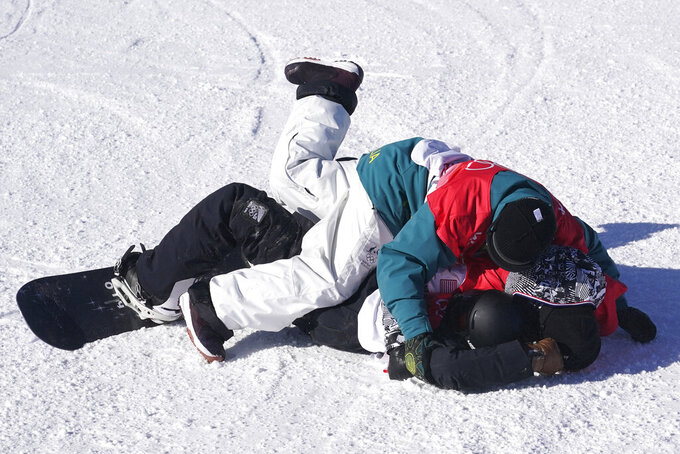 ZHANGJIAKOU, China (AP) — She scaled “The Great Wall.” She navigated, and dominated, the toughest course she had ever ridden. But if Zoi Sadowski Synnott thought the hard part was over once she crossed the Olympic finish line, she had another thing coming.

More to the point, New Zealand's first Winter Games champion had the silver and bronze medalists coming straight at her.

After watching the run that knocked them down a notch Sunday, American Julia Marino and Australian Tess Coady ran out and wrestled the new Kiwi slopestyle champion into a dogpile on the snow. They were celebrating a day that women's snowboarding had been waiting four years to see.

“Pretty sick,” Sadowski Synnott said. “That was a pretty special competition, especially after the last Olympics where we had some pretty challenging conditions.”

There was nothing easy about the Secret Garden Olympic Slopestyle course, an aesthetic masterpiece with a replica of The Great Wall bejeweled throughout the supersized layout.

But four years ago in Pyeongchang, women's snowboarding suffered a black eye. Forced to compete in windy conditions that had sent the Alpine skiers home on another part of the mountain, American Jamie Anderson won a contest in which 51 of the 60 runs ended with a rider on her backside, or slowly riding off the course, unable to navigate the shifting gusts.

The percentages weren't that much better Sunday — over the three-round final, 25 of the 36 runs were aborted or watered down, in large part because of the rock-hard snowpack and the angled run-ups to the kickers.

“We’d never really seen a course like this before,” Marino said.

The difference, though, was the way the top of the pack handled the challenge.

Where Anderson, through no fault of her own, won the 2018 contest with tricks that were throwbacks to more than a decade earlier, Sadowski Synnott won Sunday with the toughest combination in the sport — a run built for 2022.

Trailing Marino as she headed into the final run of the contest, she nailed back-to-back double-cork 1080s. It was a combo she used two weekends ago to win a gold medal at the Winter X Games. Before that, no woman had ever landed it in a competition.

“Greatest run of my life,” Sadowski Synnott said of her repeat performance on a sun-splashed day when the wind chill dropped to minus-13 degrees Fahrenheit (minus-25 Celsius).

Anderson finished ninth and didn't get through any of her three runs unscathed. It has been a rough road to the Olympics for the champion, including a break-in of her car, some out-of-character competitions and an overall sense that she just wasn't feeling it.

But she, like everyone else on the mountain, knew what this contest meant.

“I’m really happy for Zoi and Tess and just to see where and how far snowboarding has come for the girls,” the 31-year-old Anderson said. “Even if I was a little bit of that inspiration to some of the younger girls, I feel so proud and so grateful.”

Everyone was — even the second-place finisher.

Before this, the 24-year-old Marino's biggest days in snowboarding came when she won the Winter X Games in 2017 — and when she took a World Cup big air title on scaffolding built in Fenway Park in 2016.

On Sunday, she linked a backside 900 to a pair of double corks in her second run, and vaulted to first place. She stayed there for the next 45 minutes.

Marino was at the bottom waiting for Sadowski Synnott to go one last time, and she saw what everyone else did: a risk-taking run featuring well-positioned grabs in the middle of the board and solid landings. Sadowski Synnott raised both hands to the heavens after the last one. There was no need to wait for the scoreboard, which eventually registered 92.88 points and a “1" next to her name.

“I was so happy, I just went out there and charged her,” Marino said. “She stomped that to the last line. She's got the strongest legs ever, I think, because it sounded like she ‘cracked’ the landing. I was just overcome with happiness for all three of us.”

Added Coady: “It kind of looked like no one had done anything for four years last time. So it was pretty sweet to just show everyone how far we’ve come.”

The performance was a gift of sorts to Sadowski Synnott's sport, but also a gift to New Zealand.

It's a rugged land where rugby and the All Blacks rule, but there's also a wintertime world beckoning for those willing to make the effort. It has long been a training base for riders in the Northern Hemisphere who need to get work in during June, July and August.

So, yes, it has snow, and halfpipes, and mountain resorts. And now, a gold medal, too.