Social media stars: A glance at Olympians who went big 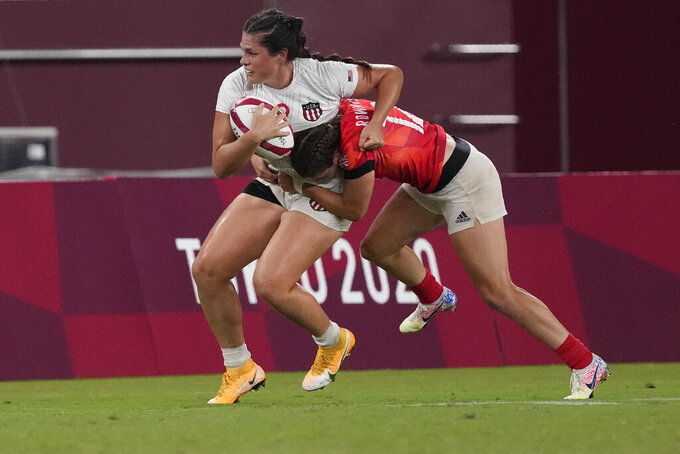 TOKYO (AP) — At the Tokyo Games, athletes have taken to social media in trailblazing ways — with high-profile results. Several Olympians from niche sports introduced themselves to America through viral videos, with TikTok the preferred platform.

Here's a look at some of the breakout stars.

SOCIAL MEDIA SPECIALTY: The 22-year-old rose to fame with her infectious positivity at the debut of skateboarding at the Tokyo Olympics. Many of her TikTok videos garner over one million views, with one of her dancing at the Olympic skateboarding venue reaching a staggering 16.5 million. Another clip of Didal dancing with 13-year old competitor and Brazilian phenom Rayssa Leal scored 15.6 million.

DEFINING SOCIAL MOMENT OF THE GAMES: While much of Didal’s fame stems from her TikTok account, her most notable social moment came on Facebook. Didal posted a picture alongside famed skater Tony Hawk, with the caption “this guy asked me to take a photo with him and I let him because he looks like Tony Hawk.”

SOCIAL MEDIA SPECIALTY: Eaton has gained popularity by holistically and shamelessly showcasing exactly who he is: a laid-back, 20-year old skateboarder. His TikTok account features dancing videos and behind-the-scenes looks at the life of a young American phenom named after Rolling Stones frontman Mick Jagger.

DEFINING SOCIAL MOMENT OF THE GAMES: After his bronze medal performance in the men’s street finals, Eaton went viral on social media for his nonchalant approach to the biggest competition in his career. The young star gained notoriety for fans' attraction to him and his humble approach to fame.

SOCIAL MEDIA SPECIALTY: The self-proclaimed "out-of-shape fencing Olympian" made jokes on TikTok about losing her fencing match “badly” and not fitting into her uniform. A three-time Olympian, Hurley gave viewers an inside look at life in the Olympic village, where she shared a room with teammate and older sister Kelley and participated in the TikTok trend of showcasing the team's problems.

DEFINING SOCIAL MOMENT OF THE GAMES: Hurley received 3.3 million views on a video in which she lip-synced to audio about “minimizing the press” with the caption “When you get everyone hyped to watch your Olympic match only to lose badly.” One viewer comment, which gained nearly 75,000 likes, stated “Make it to the Olympics, lose badly, and still keep a sense of humor about it? That’s gold-worthy in my book!”

SOCIAL MEDIA SPECIALTY: At just 13 years old, Leal’s account is authentic and features her youth and positive attitude. She danced with skateboarding competitors and performs tricks at the skatepark. Many of Leal’s uploads to TikTok are the typical dancing video, which unlike a normal teenager's, rack up views in the millions.

DEFINING SOCIAL MOMENT OF THE GAMES: After her medal-winning skateboarding performance in Tokyo, Leal’s social media exploded. Her most popular video, at 15.4 million views, shows her relaxing in front of the Tokyo city lights.

DEFINING SOCIAL MOMENT OF THE GAMES: Like many other athletes in the Olympic Village, Maher and her rugby sevens teammates tested out the cardboard beds in athlete housing. In the TikTok video that gained over 7 million views, Maher and teammates are shown performing CPR on the bed, doing yoga, throwing a tantrum, beating up a fake robber, and more.

SOCIAL MEDIA SPECIALTY: Shoji, a two-time Olympian and bronze medalist at the Rio Games, specialized in daily vlogs documenting his experience in the Olympic village. He frequently posts social media challenges or trends featuring his teammates.

DEFINING SOCIAL MOMENT OF THE GAMES: Shoji has 1.1 million views on a video documenting arrival procedures at the Tokyo airport. A second video of Shoji testing the cardboard beds with teammate and roommate Taylor Sander received 3.2 million views.

SOCIAL MEDIA SPECIALTY: While not yet an Olympian, Solymosyova gained 1.2 million TikTok followers by posting several kinds of videos — dancing, duets with other users, and Q&As about synchronized swimming —-all underwater. The 18-year-old Slovakian films herself dancing to the latest trends in goggles, a swim cap, and nose clip. She has more than 30 million likes on her TikTok videos.

DEFINING SOCIAL MOMENT OF THE GAMES: Solymosyova has garnered 42 million views on a TikTok post that shows her dancing to a remix of “WAP” by Cardi B and Megan Thee Stallion — done underwater.