Some Japanese fret more over economy and virus than Olympics 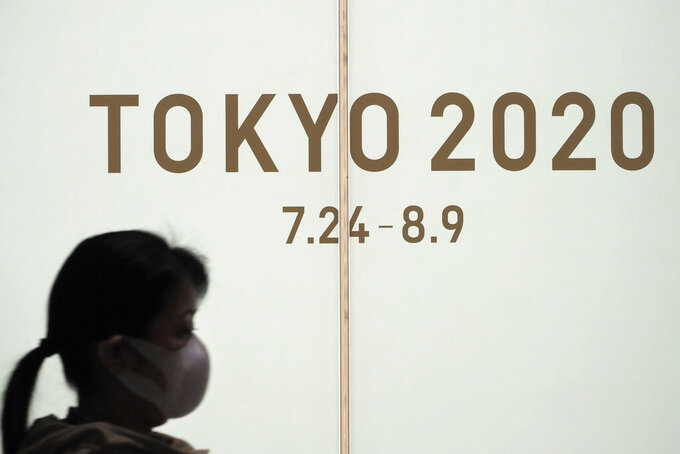 A woman walks past a large display promoting the Tokyo 2020 Olympics in Tokyo, Friday, March 13, 2020. U.S. President Donald Trump's suggestion to postpone the Tokyo Olympics for a year because of the spreading coronavirus was immediately shot down by Japan's Olympic minister. For most people, the new coronavirus causes only mild or moderate symptoms. For some it can cause more severe illness. (AP Photo/Jae C. Hong)

TOKYO (AP) — Amid the spreading coronavirus and uncertainty over the fate of the Tokyo Olympics, many Japanese may be more concerned about the virus, what happens to their schools, and the state of the economy. Canceling the Olympics might be a secondary worry.

The fate of the Olympics is a daily topic as Japan's government struggles to bring the coronavirus outbreak under control. U.S. President Donald Trump made a suggestion to postpone the Tokyo Olympics for a year because of the spreading coronavirus.

His suggestion was immediately shot down on Friday by Japan’s Olympic minister Seiko Hashimoto, a former Olympic medal winner.

Japanese organizers, government officials, and the International Olympic Committee have denied they will cancel or postpone. They say the Olympics will open on July 24 at the new $1.43 billion national stadium.

Not everyone that The Associated Press interviewed on Friday in central Tokyo seemed convinced.

“If you think about the safety of athletes, I don't think we should have the Olympics," said Yoshio Yoshimoto, a 70-year-old contract worker. “Who would take responsibility if you force it and the coronavirus outbreak turns worse?"

Yoshimoto, wearing a surgical mask, said national leaders should focus on people's health, rather than thinking about ways to hold the Olympics. “Even if the economy gets better, is the price worth it if people get sick," Yoshimoto said.

A retail store employee, Toshio Kimura passed by a busy train station with his wife and their daughter. He said Japan had already been criticized for its handling of a cruise ship. He said holding the Olympics without completely keeping the coronavirus under control could be a disaster.

As of Friday, Japan has 675 confirmed cases, plus 697 others from the cruise ship Diamond Princess, where Japanese quarantine was criticized as being insufficient.

Most people quickly recover from the virus after experiencing only mild or moderate symptoms, such as fever and cough. For some, especially older adults and people with existing health problems, it can cause more severe illness, including pneumonia.

According to the World Health Organization, people with mild illness recover in about two weeks.

He also said Japanese officials should think about what happens after the Olympics, rather than just focusing on ways to hold the games.

College student Mimi Okuta said she supports a postponement, saying there are many other more important issues that are affecting people's daily lives.

“Schools are closed, many working mothers are forced to take time off, and stock prices are falling ... and job fairs and interviews for students are being canceled because of the coronavirus," she said.

Prime Minister Shinzo Abe, under pressure to tackle the coronavirus after criticisms that he was too slow at the beginning, has stepped up measures in recent weeks and requested nationwide school closures, cancellation or postponement of cultural and athletic events, and teleworking. Abe also introduced an economic package to support small businesses and workers affected by the outbreak.

Japan is heavily invested in the Olympics. Organizers are officially spending $12.6 billion to hold the games, although a government audit report says the cost is twice that much. In addition, international broadcasters and sponsors have paid billions to the IOC for broadcasting rights and exclusive ad deals.

And some people might enjoy the Olympics, but local sports matter more.

Ayaki Ogushi, a 32-year-old office worker, laments a series of cancellations of other sports events in Japan — baseball, soccer and even sumo.

“I have a problem seeing many sports events being canceled or postponed, particularly the Japanese professional baseball,” he said. “But I don't care what happens to the Olympics.”