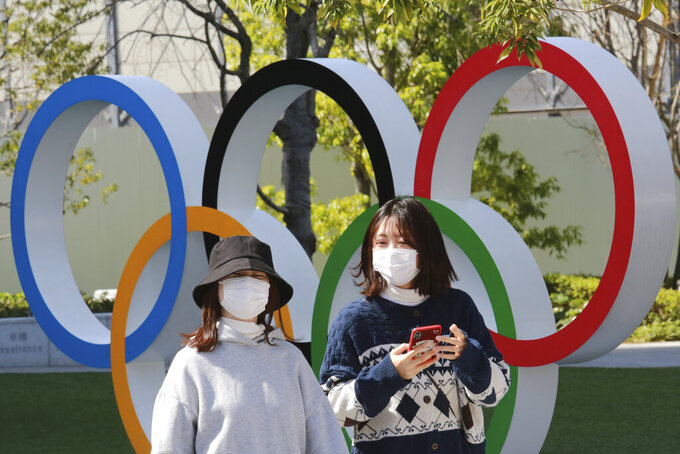 FILE - In this March 17, 2021, file photo, people walk past the Olympic rings in Tokyo. The Tokyo Olympics open in under four months, and the torch relay has begun to crisscross Japan with 10,000 runners. Organizers say they are mitigating the risks, but many medial expert aren't convinced.(AP Photo/Koji Sasahara)

TOKYO (AP) — The Tokyo Olympics open in under four months, and the torch relay has begun to crisscross Japan with 10,000 runners. Organizers say they are mitigating the risks, but some medical experts aren't convinced.

“It is best to not hold the Olympics given the considerable risks,” Dr. Norio Sugaya, an infectious diseases expert at Keiyu Hospital in Yokohama, told The Associated Press. “The risks are high in Japan. Japan is dangerous, not a safe place at all.”

Sugaya believes vaccinating 50-70% of the general public should be “a prerequisite” to safely hold the Olympics, a highly unlikely scenario given the slow vaccine rollout in Japan.

Fewer than 1% of the population has been vaccinated so far, and all are medical professionals. Most of the general public is not expected to be vaccinated by the time the Olympics open July 23.

The Japanese government and local Olympic organizers have said vaccination is not a prerequisite for the Olympics, although the International Olympic Committee is encouraging the 15,400 Olympic and Paralympic athletes to be vaccinated when they enter Japan.

The number of COVID-19-related deaths in Japan is about 9,000 — far fewer than many countries — but Sugaya stressed the number is among the highest in Asia.

Hospital systems are stretched, especially in hardest hit areas such as Tokyo.

Japan never pushed PCR testing, meaning few mechanisms are in place to prevent infection clusters. There hasn't been a national lockdown, but the government has periodically issued a “state of emergency,” urging people to work from home and restaurants to close early.

Dr. Toshio Nakagawa, who heads the Japan Medical Association, expressed serious concern about what he called “a rebound” of coronavirus cases. He called for preventive measures.

“To prevent a fourth wave, we have to act forcefully and extremely quickly,” he told reporters earlier this month.

Taisuke Nakata and Daisuke Fujii, professors of economics at the University of Tokyo, have been carrying out projections for the spread of the coronavirus, adapting a standard epidemiological model but taking into account economic activity as measured by GDP and mobility data.

According to their projections, daily infection cases in Tokyo will total more than 1,000 people by May, peaking in July, right about the time the Olympics are on. Daily cases have hovered at about 300 people for Tokyo lately.

They say that’s an “optimistic” scenario that assumes vaccines will be gradually rolling out by then.

The other possible scenario has the government declaring a state of emergency as daily cases climb. That could mean the Olympics will be held in the middle of an “emergency.”

The professors declined to comment directly on the wisdom of holding the Olympics.

Despite the warnings, the Japanese government and Tokyo Olympics organizers remain determined to go ahead with the Games. Tokyo is officially spending $15.4 billion to prepare the Olympics, but several government audits say it might be twice that much. All but $6.7 billion is public money.

The chief driver of the Olympics is the IOC, which derives almost 75% of its income from broadcast rights and needs to get the games on television.

Organizers say they will hold a “safe and secure” Olympics by keeping athletes and officials in a “bubble,” administering periodic tests, and then getting everyone to leave Japan as soon as possible.

Last week the IOC said it would cut back on the number of accredited participants entering Japan, providing credentials only to those who “have essential and operational responsibilities.”

Japanese news agency Kyodo has reported, citing unidentified sources, that 90,000 people are expected to enter Japan from abroad. About 30,000 of those are Olympic and Paralympic athletes, coaches, staff and officials.

In addition, organizers said all ticket holders from abroad would be banned from entering.

Taro Yamamoto, a former lawmaker, said Japan is not prepared to deal with an influx of travelers from abroad.

“If Japan has not been able to protect its own people, it cannot claim to be able to protect people from all over the world,” during the Olympics, he said. “To keep insisting the Games will go on is just madness.”