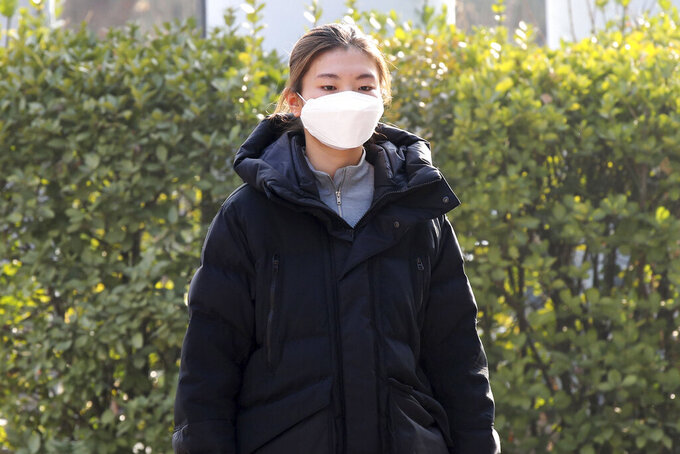 South Korean two-time Olympic short-track champion Shim Suk-hee arrives to attend a disciplinary hearing by the Korea Skating Union (KSU) at the KSU's headquarters in Seoul, South Korea, Tuesday, Dec. 21, 2021. Shim has been formally suspended for two months over her text messages that authorities believe marred the dignity of athletes, a decision that could bar her from attending the Beijing Winter Olympics. (Koh June-beom/Newsis via AP)

SEOUL, South Korea (AP) — Two-time Olympic short-track champion Shim Suk-hee has been suspended for two months over her text messages that authorities say “marred the dignity of athletes," a decision that could bar her from attending the Beijing Winter Olympics.

The Korea Staking Union said Wednesday it decided to suspend Shim from the national team during a disciplinary meeting held Tuesday.

Shim can appeal the ruling to the Korean Sport & Olympic Committee or file for an injunction with a local court. Even if either of them accepts her appeal, the Korea Staking Union isn't obliged to overturn or lessen its penalty immediately and can hold another internal meeting to discuss whether to include her in the national team, according to the skating union.

This possible lengthy process suggests it's difficult for Shim to go to Beijing as the Olympics are to open on Feb. 4 and South Korea's Olympic committee plans to submit its short-track entry list on Jan. 24.

In October, Shim was cut from the team after a local media reported what it described as text messages exchanged between her and her coach that insulted two teammates and suggested she might have deliberately tripped one of them, Choi Min-jeong, during 2018 Pyeongchang Winter Games.

After the messages were exchanged, Shim and Choi indeed did take each other out amid a desperate late charge in the 1,000-meter race. Shim was later disqualified and Choi was ranked fourth.

Kim Seong-cheol, head of a Korea Skating Union committee that determined Shim’s two-month suspension, said she received the penalty because her messages invited public criticism and undermined the dignity of other athletes, according to the union.

Cho Hang-min, the coach who exchanged the messages with Shim, was suspended for six months.

Shim’s agency couldn’t immediately respond to a request for comments on the suspension. The 24-year-old previously apologized to Choi but denied she deliberately tripped her.

After the 2018 Olympics, Shim garnered headlines by accusing another former coach of raping her amid a growing #MeToo movement in South Korea. Her revelation encouraged other female athletes to speak up about the alleged abuse they suffered from their coaches.