Spanish athletes put on their police uniforms to fight virus 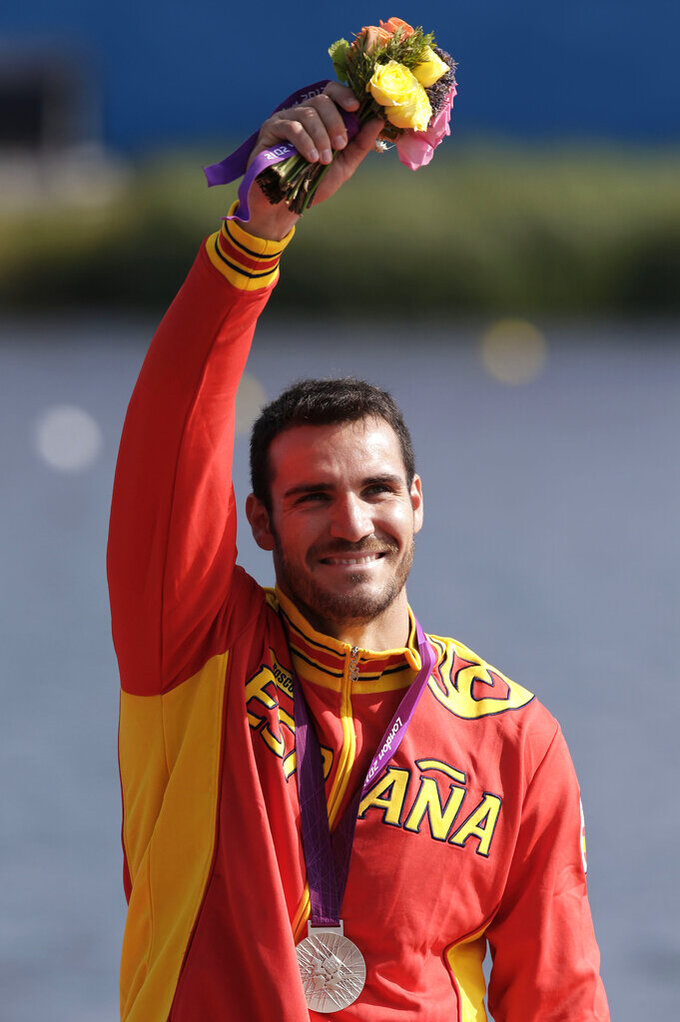 FILE - In this Saturday, Aug. 11, 2012, file photo, Spain's Saul Craviotto Rivero celebrates after winning the silver medal in the men's kayak single 200m in Eton Dorney, near Windsor, England, at the 2012 Summer Olympics. It wasn't long ago that Saul Craviotto was sitting in his kayak contemplating a much-anticipated announcement from the Spanish Olympic Committee but now he is among some of the Spanish athletes and sportspeople who have rejoined the police force to help the hard-hit southern European country during the pandemic. He was set to be named the country's flagbearer for the opening ceremonies in Tokyo. (AP Photo/Natacha Pisarenko)

MADRID (AP) — It wasn’t long ago that Saúl Craviotto was sitting in his kayak contemplating a much-anticipated announcement by the Spanish Olympic Committee.

As Spain’s most successful athlete entering the Tokyo Games, Craviotto was set to be named the country’s flag bearer for the opening ceremony. That's when Spain came to a sudden halt because of the coronavirus pandemic and the Olympics were postponed until 2021.

Just like that, instead of being on a kayak preparing for a historic games for him, the 35-year-old Craviotto took to the streets as a police officer in the northern city of Gijón, helping enforce confinement rules.

“It was a radical change,” Craviotto told The Associated Press this week. “You go from preparing for the Olympic Games to the next day not having the games. But the important thing now is everyone’s health and sports has become secondary, so it’s time to put on the uniform and try to overcome this situation.”

A four-time Olympic medalist, Craviotto is among the Spanish athletes and sportspeople who have returned to the police force during the pandemic, which has claimed more than 26,000 lives in Spain.

Craviotto, whose popularity grew after he won the 2017 edition of the Spanish television show “ MasterChef Celebrity,” won Olympic gold medals in Beijing and Rio de Janeiro. He was a silver medalist in London. A bronze medal from Rio rounds out his Olympic collection. Another medal in Tokyo would make him Spain’s most successful Olympian. Fellow canoeist David Cal is at the top the list with five medals but only one gold.

“Everyone was talking about the flag bearer and then this happened with the coronavirus and everybody stopped talking about it,” Craviotto said. “Now, I don’t know how it’s going to be. And I don’t think it’s the time to ask the Olympic committee about this.”

Like other countries, Spain allows elite athletes to work for the military or police. Their job duties usually are limited to anti-drugs and anti-bullying speeches in schools.

But nearly all of the athletes have been patrolling streets to enforce confinement rules in place since mid-March. The government only began loosening lockdown restrictions this week.

The police have been busy everywhere across the country, having already handed out almost 800,000 fines and detaining nearly 7,000 people for leaving quarantine.

“Considering the situation we are in, there was no reason not to go back to the streets and lend a hand for a few months to help keep the pandemic from spreading,” Méndez told the AP. “I’m enjoying this opportunity to help others. I can’t wait for sports to resume, but first we have to take care of people’s health.”

A former beach soccer goalkeeper, the 37-year-old Méndez is also the current coach of Spain’s men’s and under-21 beach soccer teams. He became a police officer in 2006 and since then had been sharing his time between the sport and the police force.

Both Méndez and Craviotto, who became a police officer in 2007, volunteered to patrol the streets after the state of emergency was declared.

“I’ll always be a police officer,” Craviotto said. “I’m not doing anything heroic, it’s just my job. Kayaking is my passion and being a police officer is my profession. I’m very comfortable in both activities. They share similar values, like discipline, companionship.”

Craviotto’s coach, Miguel García, said he wasn’t surprised when the kayaker decided to help, considering he “always took a step forward when things got difficult.”

“Being an athlete kind of helps him as a police officer, because of the discipline and the commitment that he already carried as an athlete,” García said.

Craviotto is planning to return to full-time training when things improve in Spain or when it gets closer to the games next year. The Tokyo Games are set to open July 23, 2021, followed by the Paralympics on Aug. 24.

Méndez, meanwhile, is already taking a break from the police force because of the recent birth of his daughter, Chloe.

“It’s clear that 2020 will be historic for everyone,” he said. “When my daughter is 8 or 10 years old, I’ll be telling her that her father was in the front line fighting against this pandemic, day in and day out.”

“This is a nightmare that the entire planet is going through," he said. "Hopefully we can resume our normal lives soon.”