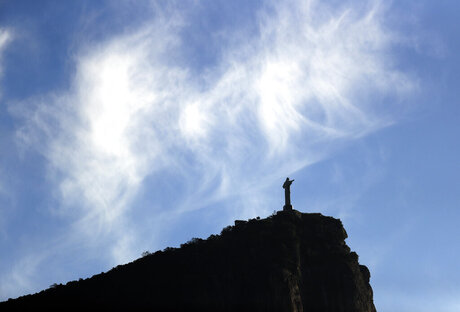 By: GRAHAM DUNBAR (AP)
GENEVACopyright 2020 The Associated Press. All rights reserved. This material may not be published, broadcast, rewritten or redistributed.
46.20226.14569

GENEVA (AP) — Two days after Russia finished fourth in the Olympic medal table, its Paralympic team was barred from the next big games in Rio de Janeiro as punishment for a state-backed doping program.

Sport's highest court on Tuesday upheld a decision by the International Paralympic Committee to exclude the sports superpower. It was a step the IOC declined to take when it had the chance last month.

The 267 entries which Russian Paralympic athletes earned in 18 sports for the Sept. 7-18 games in Rio will now be allocated to other nations not judged responsible for orchestrated cheating.

Russia won 36 gold medals at the 2012 Paralympics, second most in London, and was a runaway table-topping leader at its home 2014 Winter Paralympics.

Still, the Sochi Winter Games and Winter Paralympics are now notorious for results corrupted by state-funded agencies plotting to swap tainted doping samples from Russian athletes for clean ones at official testing laboratories.

In the fallout from those recent revelations — by the Russian lab director who has fled to the United States, and a World Anti-Doping Agency inquiry set up to investigate his claims — the Court of Arbitration for Sport announced its urgent verdict Tuesday.

CAS dismissed the Russian Paralympic Committee's appeal against exclusion from competing in Rio after a hearing was held in Brazil on Monday.

The court said its judges agreed the world Paralympic body "did not violate any procedural rule" in banning the Russian team two weeks ago.

Then, in Rio, the IPC President Philip Craven had said of Russia that: "Their medals over morals mentality disgusts me."

"(The) decision to ban the (Russian team) was made in accordance with the IPC Rules and was proportionate in the circumstances," the sports court said Tuesday in a statement.

"The investigation about the Russian doping is a thick and disgusting mix containing 80 percent of politics and 20 percent of the actual doping, the politics targeting against sports, Russian athletes and Russia as a country," Medvedev wrote in a Facebook post on Tuesday.

Medvedev described the ban as "a doubly cynical decision since we're talking about people who have to overcome themselves every day. It's a blow for all disabled people, not just the Russian ones."

A further appeal to Switzerland's federal court is possible, though unlikely before the games open, an attorney representing the Russian athletes, Alexei Karpenko, said in televised remarks.

The Swiss supreme court could intervene if the legal process was abused by Lausanne-based CAS, though it would not re-judge the evidence. The CAS panel was satisfied that organized Russia doping was proven.

The Russian appeal to CAS "did not file any evidence contradicting the facts on which the IPC decision was based," the court's judging panel said.

The world Paralympic governing body used evidence from an ongoing WADA-appointed investigation into a Russian state program of doping and cover-ups which ran from 2011 to 2015 in almost 30 summer and winter sports.

The IPC said two weeks ago it had evidence of manipulated doping tests relating to 44 Russian athletes, including 27 from competitors in eight sports on the Paralympic program.

On Tuesday, Craven said the ruling was a "sad day for the Paralympic Movement, but we hope also a new beginning."

"Today's decision underlines our strong belief that doping has absolutely no place in Paralympic sport, and further improves our ability to ensure fair competition and a level playing field for all Para athletes around the world," Craven said in a statement.

Still, it was "not a day for celebration and we have enormous sympathy for the Russian athletes who will now miss out on the Rio 2016 Paralympic Games," the British official said.

Craven is also a member of the International Olympic Committee, whose executive board declined to use similar evidence from WADA investigator Richard McLaren's report to exclude Russia for the Rio Olympics which ended Sunday.

Instead, the IOC asked individual sports governing bodies to decide if Russian teams and athletes could compete. Russia's weightlifting team was banned and only one track and field athlete, who trained in the U.S. out of the Russian testing system, was ruled eligible.

Russia won 56 Olympic medals, including 19 gold, in Rio to trail only the U.S., Britain and China.

Medvedev suggested Russia's strength as a competitor was a factor in the blanket ban.

"One certainly sees in this decision a striving of some leaders of the international Paralympic movement to eliminate strong rivals since our team always won top spots," the former state president wrote.