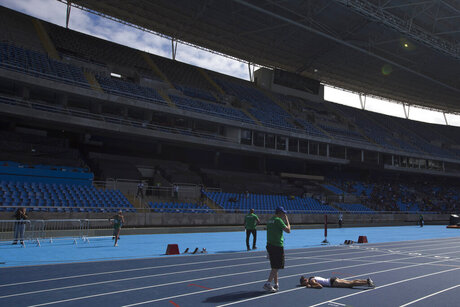 By: MAURICIO SAVARESE (AP)
RIO DE JANEIROCopyright 2020 The Associated Press. All rights reserved. This material may not be published, broadcast, rewritten or redistributed.
-22.9028-43.2075

RIO DE JANEIRO (AP) — Brazil's new sports minister is accused of a conflict of interest because a family business partners with a company selling gravel to construction companies working on Olympic projects.

Leonardo Picciani, a congressman who comes from an influential family in Rio de Janeiro, denies any wrongdoing and spent the weekend inaugurating a new Olympic venue.

He and his family own Agrobilara, a company worth $12 million that has a partnership with Tamoio, which provides the gravel.

In a statement, Picciani said his company doesn't take part in Tamoio's decision-making, and said it doesn't have any contracts with Rio's city hall or the state government. He said Brazil's sports ministry does not award contracts for Olympic projects.

He is the third sports minister in three months.

Rafael Picciani, the minister's brother, is Rio's municipal transportation secretary. His father, Jorge Picciani, is the speaker of the Rio state assembly.

Picciani said Tamoio was involved with Olympic works only because it was hired by the consortium Rio Mais, which was led by Brazilian construction firm Odebrecht.

The sports minister was a member of the same political party as Rio Mayor Eduardo Paes, who welcomed the appointment and said it was good to have an ally in the post.

Odebrecht is involved in many Olympic venues and other construction to prepare the city for the games. Company CEO Marcelo Odebrecht was recently sentenced to 19 years in jail for corruption connected to the $3 billion Petrobras scandal, which saw the company pay bribes to land lucrative contracts.

Rio de Janeiro city councilman Jefferson Moura is leading an inquiry into the contracts, while federal police involved in the Petrobras probe are also looking at Olympic contracts.