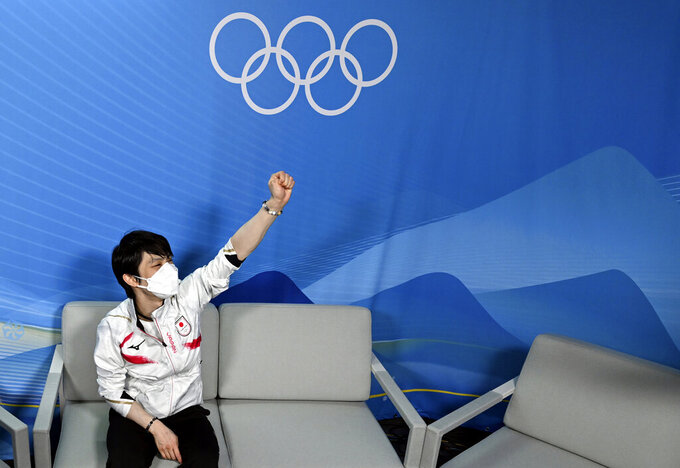 Japan's Yuzuru Hanyu gestures in the green room after competing in the men's free skate program during the figure skating event at the 2022 Winter Olympics, Thursday, Feb. 10, 2022, in Beijing. (Antonin Thuillier/Pool via AP)

BEIJING (AP) — On the same day that American figure skater Nathan Chen was busy achieving a lifelong dream by becoming an Olympic champion, his longtime rival was skating off their sport's grandest stage for perhaps the final time.

Yuzuru Hanyu, the two-time gold medalist from Japan, had been the benchmark for an entire generation of young skaters, including Chen, who had watched him push the boundaries of what a human could do on ice. He had jumped higher, soared farther and spun faster than anyone else, doing all of it with a flamboyant panache entirely his own.

But on Thursday, while Chen was stepping onto the top step of the podium and flanked by two other Japanese stars, silver medalist Yuma Kagiyama and bronze medalist Shoma Uno, the erstwhile champion was nowhere to be found.

Hanyu had slipped away quietly after a fourth-place finish left him one step away from the medals.

Asked later whether that was the end, he replied: “I don't know. I want to take a little more time (to think about it).”

Hanyu doesn't have anything else to prove.

He burst onto the international scene a decade ago, winning a junior world championship that served as a harbinger of the great things to come. He began to win major events on the Grand Prix circuit, later won two world titles and delivered the first Olympic championship in figure skating for an Asian man when he triumphed at the 2014 Sochi Games.

He was just 19, the youngest man to win the title since American star Dick Button won the first of his back-to-back titles in 1948, and that raised the question: How many Olympic titles could Hanyu win?

He made it two when he triumphed in 2018 in Pyeongchang.

The road to Beijing had been fraught with injury and self-doubt, though. Hanyu acknowledged having a hard time trying to summon the same desire that carried him through his first two Olympic cycles, and a series of injuries to his ankle knocked him out of numerous events, including the entire Grand Prix season during the run-up to the Winter Games.

It was the quadruple axel that ultimately captured his imagination. It's the only quad that has never been landed cleanly in competition, and by far the most difficult, but it actually involves 4 1/2 revolutions rather than just four.

“No matter how hard, no matter how unimaginable," Hanyu said. "I want to push a little bit more for those who have expectations in me.”

After a disappointing short program on Tuesday, when Hanyu's skate clipped a hole in the ice and he was forced to bail out of one of his crucial jumps, he had nothing left to lose. He went for figure skating's white whale to open his program to music from Japanese composer Isao Tomita, launching into the air and spinning as fast as possible.

He came so close to landing it that Chen, watching backstage, thought for a split second that Hanyu had actually done it.

Alas, the jump left Hanyu sliding across the ice on his hip. He bounced back up, as figure skaters are taught to do, and then fell again on his next jump, a quad salchow. The rest of the program went smoothly, allowing Hanyu to enjoy the moment.

When he stepped off the ice, he bent down and rubbed it with his hands, then touched his hands to his face.

An entire generation of figure skaters wanted to thank him, too.

“In Olympic Games, what matters is not what place you get but the efforts to outdo yourself and to perform better and better,” Chinese skater Jin Boyang said. “Yuzuru chose to participate in his third Olympic Games at the age of 27. He aimed higher and tried to perform the quad axel. This is something extraordinary that no one can yet achieve.”

Chen said “it's been amazing” to compete against Hanyu, including four head-to-head matches over the past four years.

“It's been amazing even to have an opportunity to be an athlete at the same time as Hanyu,” Chen said, “and see how he keeps pushing the sport forward, even after so many years dominating the field. It's been really impressive.”

Ever since 2010, when Hanyu was seen toting a box of tissues with Winnie the Pooh on it, his legion of supporters have showered the ice with hundreds of stuffed Pooh bears rather than traditional flowers whenever he competes.

They nearly covered the ice in a blanket of yellow when Hanyu triumphed at the 2018 Pyeongchang Games.

There were only a few thousand fans allowed inside the tightly controlled Olympic bubble to watch Hanyu compete at Capital Indoor Stadium this week, though. And they were prohibited from throwing anything on the ice, a safeguard imposed by organizers to minimize the potential spread of COVID-19.

Instead, they massed outside the gate of the arena, hundreds of them standing in the cold February sun, waiting with their Poohs for Hanyu's bus to drive by and bid him what could be one final farewell.