Strong in qualifying, Kauf gets head start at Beijing Games 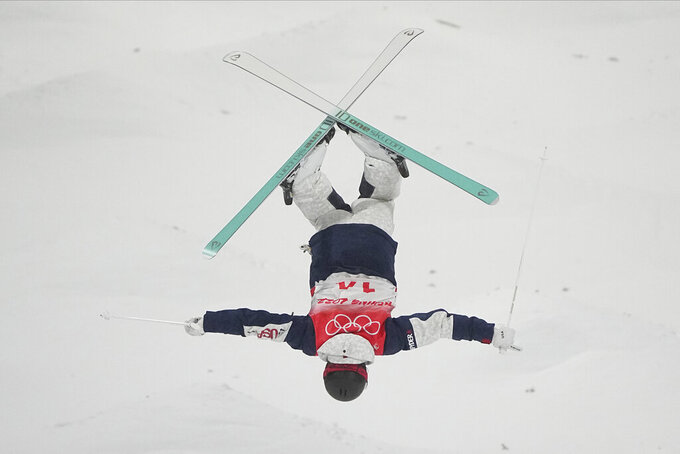 ZHANGJIAKOU, China (AP) — Before her qualifying round, moguls skier Jaelin Kauf put on a pair of necklaces — one silver, the other gold — custom-made by her mom.

Then, she went out and put herself in the mix for more hardware this weekend.

The 25-year-old American got a great start on her Olympic journey, speeding through the bumps to finish third in a qualifying round Thursday, the night before the cauldron is lit in Beijing to mark the official start of these Olympics. She'll be back at it Sunday with the medals on the line.

“I’m stoked I put a solid top-to-bottom (run) down to start off the Olympics,” said Kauf, who also painted her nails red with gold sparkles for the occasion.

Jakara Anthony of Australia led the way in qualifying, followed by defending Olympic champion Perrine Laffont of France. Kauf's American teammates, Olivia Giaccio and Hannah Soar, each finished in the top 10 to guarantee their spots in the final. Nobody was completely eliminated. The 11th through 30th finishers get another qualifying round Sunday.

Next up, an interesting decision: attend the opening ceremony Friday or stay home and get some rest?

"I’ve had a little bit of experience competing before the opening ceremony and I’ve never really marched in an opening ceremony,” said Britteny Cox, an Aussie at her fourth Olympics who qualified for the final. “So, for me, it’s kind of business as usual.”

The only American who didn't advance was Kai Owens, who was a scratch due to a nasty crash in training a few days earlier. She posted a picture on social media of her gruesomely swollen eye. Team officials said she was under medical evaluation, but could be cleared in time to compete Sunday.

Owens is the 17-year-old who's returning to the country where she was born. Abandoned at a town square in a province of China as an infant, she was taken to an orphanage and adopted at around 16 months by a couple from Colorado.

Thursday was supposed to be Owens' first official trip down an Olympic moguls course. Not the case for Kauf.

She was a top-ranked favorite heading into the Pyeongchang Games four years ago, but finished seventh. She felt the pressure — “mostly from myself,” she said — and wound up disappointed.

“Just kind of expected a lot more but didn’t do everything I had to there,” she explained.

Kauf is the next generation of daredevils in her family. Her mother, Patti, won two titles on the World Pro Moguls Tour back in the day, and her dad, Scott, won five.

They've crisscrossed the globe to follow Jaelin's burgeoning career. That's not possible at these Games due to COVID, but that didn't mean they weren't close to her heart.

Before qualifying, Kauf opened a care package from home. In it, the gold necklace from mom with five diamonds to represent the Olympic rings. The middle contained a pearl. The accompanying note explained the significance of the pearl.

“Basically a pearl is made from grit and turned into something remarkable,” said Kauf, who also received a silver necklace with the Olympic rings from her mom in 2018.

Kauf's teammate, Giaccio, was the first U.S. skier in the lineup, and she found it somewhat surreal.

“I saw on the run order today I’d be the one to kick it off for Team USA for the entire Games, so that was pretty cool," the first-time Olympian said. "It’s really exciting to get to start off the Olympics on a high note, really.”

With wispy flakes falling on the 0-degree (minus-18 Celsius) night, the course was fast and firm — no big surprises for the first burst of Olympic action on the mountain.

“It is exactly how you pictured an Olympic course would be — pristine, textbook," said Soar, who also was making her Olympic debut. “Every dimension, every mogul, every shape is just absolutely picturesque.”

NOTES: Mikael Kingsbury started his Olympic title defense in fine fashion with the top score in qualifying. The Canadian standout is attempting to become the second men’s moguls skier to win back-to-back gold medals. Fellow Canadian Alexandre Bilodeau accomplished the feat in 2010 and ’14. ... Americans Cole McDonald and Dylan Walczyk qualified for the final.