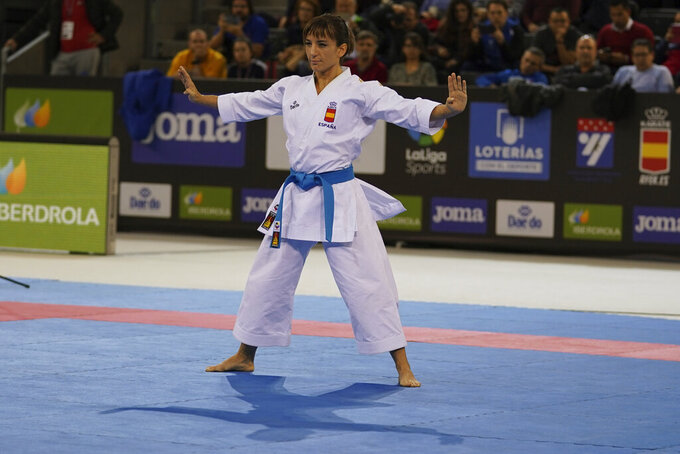 In this photo provided by the Spanish karate federation, Spanish karate athlete Sandra Sanchez takes part in a Senior Female Kata - Final bout in Madrid, Spain on Dec. 1, 2019. Personal determination has taken Sanchez to the top of the world rankings, and in a few months from now the 38-year old will reach the biggest moment of her career by competing in the inaugural Olympic karate tournament at the upcoming summer Tokyo Olympic Games. (Xavier Servolle/Kphotos Via AP)

MADRID (AP) — Spanish karate athlete Sandra Sánchez has always been the stubborn type. It’s been part of her personality for her entire life.

Since a young age she had to work hard to get what she wanted, starting with convincing her parents to let her be in karate instead of dance classes.

That never-give-up attitude helped her make it to Spain’s national team for the first time at the age of 33 following a series of setbacks, including a period in which she had to stay away from the sport because her mother was ill.

That determination also took her to the top of the world rankings, including the “all-time” list of best female athletes in the kata category, in which karatekas perform solo and are evaluated on their offensive and defensive techniques.

A few months from now, the 38-year-old Sánchez will reach the biggest moment of her career by competing in the inaugural Olympic karate tournament at the Tokyo Games, where she will be among the gold-medal favorites.

“My stubbornness, my will to always keep working and to keep improving day after day, has allowed me to reach this moment,” the always-smiling Sánchez told The Associated Press after a recent training session in Madrid.

“After everything I went through in order to make it to the national team, I’m now being able to be part of this special time in which karate is part of an Olympic cycle,” she said. “I feel very lucky.”

But it was more “work” than “luck” that proved key for Sánchez, who considers herself “a working ant that never gets tired” and goes by the moto “if you keep trying, you can make the impossible become a reality.”

“There’s a bit of luck because my good moment has coincided with karate’s moment in the Olympics,” she said. “But this is only happening because of how much I persevered to make it here. There was a lot of hard work involved, day after day.”

Indeed, it took a lot for Sánchez to make it, as time after time she had to keep getting back up after being put down.

She had been showing her talent and winning medals since she was young, but kept failing to make it to Spain’s national team. The results in national championships weren’t coming and the call up for the national team wasn’t happening.

“They considered that I didn’t fit the team,” Sánchez said. “The level of the Spanish national team at that time was very high. The team was achieving some great results and it wasn’t easy to bet on someone new. But luckily I was stubborn, I kept working hard and my opportunity finally arrived and I took advantage of it.”

Sánchez had been close to making it to the national team before when she was invited to train at Madrid’s High Performance Center, but her mother was diagnosed with cancer soon after and Sánchez decided to go back home to be with her family. She stopped competing for about two years, going back to studying and working. She also spent some time in Australia learning English.

Sánchez returned to Spain and began training again, getting the break she needed when she was invited to compete for a club in Dubai, which allowed her to participate in more international events. She made the move to the United Arab Emirates with her husband, Jesús del Moral, who in 2016 became Spain’s national team coach for kata. Sánchez’s results quickly improved and the call for the national team finally arrived.

“Better late than never,” Sánchez said. “It took a while. I know my story wasn't the most conventional one.”

The federation said it became an obvious decision to pick her at the time.

“We didn’t look at her age, we looked at her performance, and she was the best,” José María de Dios, technical director for the Spanish karate federation, told The Associated Press. “After she finally made it, nobody was able to come close to her.”

Sánchez thrived since making it to the national team, winning six straight Spanish titles and five consecutive European trophies. She won the 2018 world title in Madrid and earned more than 70 medals in total, most of them gold.

More than once, Sánchez shared awards for Spain’s best athlete of the year with tennis star Rafael Nadal, and she quickly gained notoriety in the country outside the karate realm, making front pages of newspapers and magazines and participating in television talk shows.

She will be among 80 athletes competing in karate in Tokyo. The other category in contention will be kumite, where fighters face each other and the winner is the one who gets more points for arm and leg strikes on the opponent.

A good showing will be key for karate, which made it to Tokyo but is not expected to be included in the program for the 2024 Paris Games. The sport was not originally selected by French organizers, though the final decision by the International Olympic Committee isn't expected until December.

Karate’s debut this year isn’t guaranteed either, as the threat of postponing or canceling the Tokyo Games remains alive because of the coronavirus outbreak. Sánchez has been practicing at home because the national team's training center in Madrid was temporarily closed down.

“Hopefully all of this goes away,” Sánchez said. “Our goal is to keep training and to be at the games.”