Surfing science: Dependent on weather, defined by the ocean 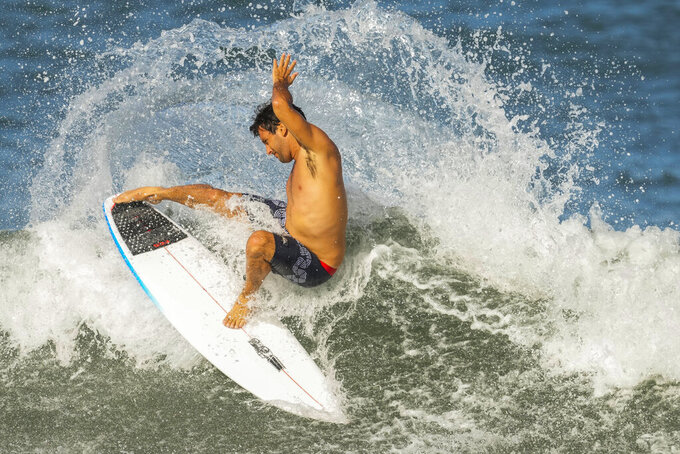 ICHINOMIYA, Japan (AP) — Olympic surfing’s debut is making clear that these wave riders are unsung masters of science -- in climatology, meteorology and oceanography to be exact.

Serious wave chasers are by default atmospheric science junkies because there are few, if any, sports that are both dependent on an uncontrollable variable — the weather — and defined by a literal uneven playing field — the ocean.

Surfers are known to study both in obsessive detail.

“Any time the wind blows: ‘What direction is the wind?,’” said Owen Wright, 31, who is competing for the Australia team. “We don’t just look at the weather and go ‘Oh, it’s nice and sunny’ when we know (the wind is) probably offshore. It’s never just like ‘Oh, it’s raining.’ It’s always got to do with what the surf is like.”

At the Olympics, organizers are preparing for at least three days of competition over an eight day period, which begins July 25. Surf competitions are determined the day of, and based on the weather forecast, wave height, wind direction, tidal movement, and temperature, among other scientific data points.

“Every person who goes into the ocean, whether you’re a surfer or not, you’re an amateur meteorologist and oceanographer,” said Kurt Korte, lead forecaster at Surfline and the official Olympic surfing forecaster.

But the numbers can only inform so much. The meteorological data is just part of the equation in assessing what the mighty ocean will deliver, which can change from 30-minute heat to 30-minute heat in competition.

Waves are created by the way the swells interact with the bottom contours of the ocean, called the break. Beach breaks — like the Olympic site at Tsurigasaki beach — happen because of sandbars, which can shift over time or due to storms.

Competitive surfing in a nutshell is about deciding which wave to take and what move or moves make the best use of what the ocean delivers. Surfers have to remain prepared and continuously observe the waves for their best guess of what wave they will get to ride.

Surfline, the U.S.-based surf forecasting service, was integral in the International Surfing Association’s decision to have the sport’s Olympic debut at Tsurigasaki beach, 90 miles east of Tokyo. Surfline has been studying the local conditions since 2015 and is currently forecasting sizable waves during the early days of the competition period thanks to a brewing typhoon.

Korte said he’ll be at the beach before sunrise at 4 a.m. each day to see and feel the conditions. He’ll advise officials from the ISA, the Olympic governing body, and event managers. The call on whether to go ahead with the competition will be made on site each day by about 7 a.m.

Surfers may be some of the only people who get excited to hear about a big storm, though they hope the typhoons, hurricanes and tropical weather systems stay hundreds of miles offshore. They calculate where the storm hits and how fast it's moving, then reverse engineer to project how many miles it is away from a certain beach to determine which days those ripples should make it onto shore.

The way the weather is currently moving is a major win for the Olympics, given that Tsurigasaki is not generally known for powerful waves. The beach is popular for surfing in Japan but is hardly a world class location like Hawaii or Tahiti. Korte said Tsurigasaki typically offers surfing conditions like those seen on the coast of North Carolina.

Many surfers have verbalized their fears that their grand global debut will be blunted by mediocre waves, though Korte rejects the notion that the world’s best athletes could possibly disappoint in such a beautiful, visually stunning sport.

“They take a wave that an average surfer may not even surf and make it look incredible,” Korte said. “I think it’s a wonderful opportunity to see surfing in whatever conditions come.”