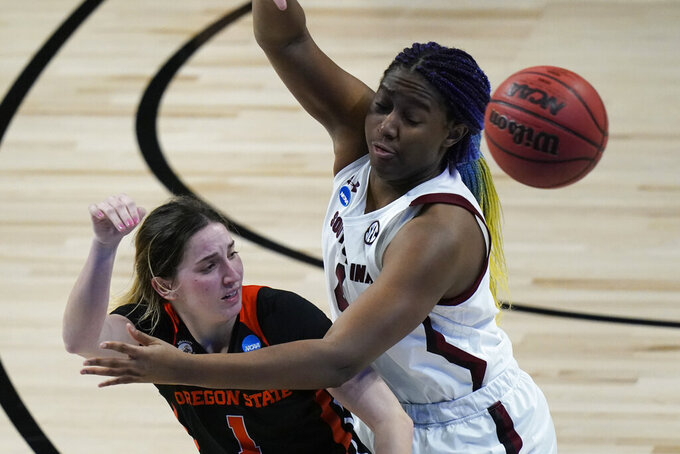 Oregon State guard Aleah Goodman, left, passes around South Carolina forward Aliyah Boston, right, during the second half of a college basketball game in the second round of the women's NCAA tournament at the Alamodome in San Antonio, Tuesday, March 23, 2021. (AP Photo/Eric Gay) 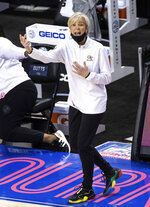 SAN ANTONIO (AP) — Dawn Staley and Nell Fortner won Olympic gold medals together as player and coach. Now they are standing in each other's way on the path to the women's Final Four.

It's not the first time they've faced off from the sidelines, but Sunday's matchup between Staley's top-seeded South Carolina and Fortner's No. 5 Georgia Tech in the Sweet 16 of the NCAA Tournament Hemisfair Region will be the biggest stage they've shared together since the 2000 Olympics in Sydney, Australia.

Back then, Fortner was coaching a team led by Staley, a fiery and intense point guard. They had also been together for the 1996 Olympic gold-medal team when Fortner was an assistant.

Fortner still calls Staley one of best team leaders she's ever coached, and even she was a bit in awe of Staley the player back then.

After their first game in Sydney, Fortner was sitting on the team bus when Staley got on, patted her on the back and said “good job." That simple moment of validation from star player to coach of an all-star team sent the message that everyone was on the same page for the same goal.

“You don't get a lot of sincere compliments from people who you really value ... Her saying that meant a lot to me. It still does," Fortner said.

Olympic success forged a connection that will never be broken, Staley said.

“We will forever have a bond,” Staley said.

They have cut different coaching paths to their meeting in San Antonio.

Staley has built a powerhouse at South Carolina since taking over in 2008, winning the national championship in 2017. After the Olympics, Fortner coached in the WNBA, then landed at Auburn where she struggled to build the program beyond modest success. After several years in the broadcast booth, she returned to coaching with Georgia Tech in 2019.

That move has rejuvenated both coach and program. Fortner has the Yellow Jackets in the Sweet 16 for the first time.

“I missed the teaching," Fortner said. "I missed energizing kids to help them achieve their goals.”

Staley and Fortner have raised similar, strong voices in the chorus of complaints about the NCAA and the disparities between the men's and women's tournaments.

“They want to make sure they are growing the game for all women," said Katie Smith, who played on the 2000 Olympic team with Fortner and Staley. “It's not just basketball. It's bigger than that. It's about equality ... To them, this matters.”

This summer, Staley will coach the U.S. Olympic team in Tokyo, a year later than expected as the games were postponed by the coronavirus pandemic.

“In the U.S. we're supposed to win, ‘Nothing but gold, baby! Don’t come home without it'!'" Fortner said. “I have no doubt she can handle it. She's handled it her whole life.”

The Gamecocks felt robbed of a potential title run last season when they could have been the overall No. 1 seed before the coronavirus pandemic struck. Their start to this season's tournament hasn't been a pretty as some might like, but it has been effective, especially on defense and under the basket where the Gamecocks are muscular and aggressive.

Senior guard Lele Grissett's ankle injury has forced some lineup changes, and that just let Staley go even bigger by inserting 6-foot-4 Laeticia Amihere alongside forwards Victaria Saxton, who is 6-2 and Aliyah Boston, who is 6-5.

Fifth-seed Georgia Tech (17-8) won't rattle easily. The Yellow Jackets rallied from 17 down in the second half against Stephen F. Austin in the first round. It was one of the biggest comebacks in tournament history.

The X-Factor: Georgia Tech needs shooter Lotta-Maj Lahtinen to open up the Gamecocks defense. After struggling in the first round, she found her touch with 17 first-half points against West Virginia.

The No. 2 Terrapins on are a tear.

Maryland (26-2) averaged 99 points in the first two games. And the scoring goes deep. The Terps got an overwhelming 46 points off the bench in scoring 100 against Alabama in the second round.

Sixth-seed Texas (20-9) is surging under first-year coach Vic Schaefer. Guards Celeste Taylor, Kyra Lambert and Joanne Allen-Taylor have taken over when forward Charli Collier, the potential No. 1 pick in the WNBA draft, gets in foul trouble. The Texas bench is limited. The three guards all played 40 minutes in a second-round win over UCLA.

Players to Watch: Terps transfer guard Katie Benzan originally committed to Texas before switching to Maryland. She came into the tournament as the top 3-point shooter in the country at 51 percent. Texas forward Lauren Ebo will be key if Collier gets in foul trouble again. Ebo played 30 minutes with seven points and six rebounds against UCLA.