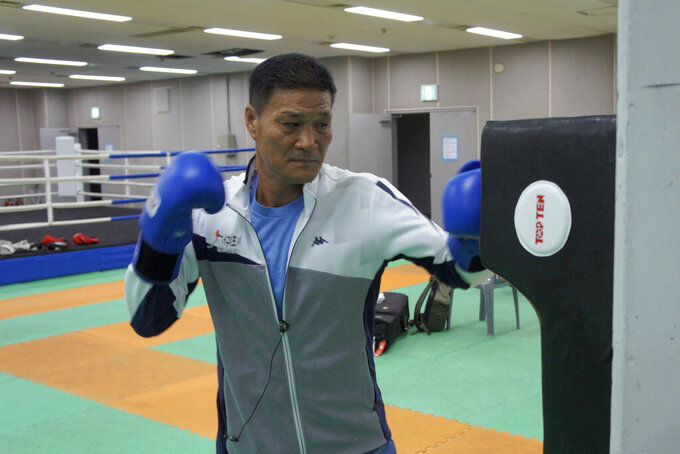 Former Olympic gold medalist Park Si-hun wearing boxing gloves punches a bag for photos after an interview on Jeju Island, South Korea, Tuesday, July 21, 2020. The last South Korean boxer to win an Olympic gold has spent the past 32 years wishing it was a silver. Park's 3-2 decision win over Roy Jones Jr. in the light-middleweight final at the 1988 Seoul Olympics remains one of the controversial moments in boxing history. Jones had seemed to dominate. (AP Photo/Kim Tong-hyung)

JEJU ISLAND, South Korea (AP) — EDITORS — With the Tokyo Olympics postponed for a year because of the coronavirus pandemic, The Associated Press is looking back at the history of Summer Games. South Korean boxer Park Si-hun was interviewed 32 years after his controversial gold medal victory over Roy Jones Jr.

The last South Korean boxer to win an Olympic gold medal has spent the past 32 years wishing it was a silver.

Entering the men’s light-middleweight final against an American teenager named Roy Jones Jr. on the last day of the 1988 Games in Seoul, Park Si-hun fantasized about etching his name in the pantheon of South Korean sports legends in front of a delirious home crowd.

He did get his gold three rounds later, but not the way he envisioned.

Park’s win by a 3-2 decision remains as one of the most controversial moments in boxing history, as Jones had seemed to dominate the fight from start to finish.

The outcome drew instant criticism and disdain, even from South Koreans, who heckled Park at the podium and bombarded local TV stations with phone calls protesting that the country’s home advantage had gone too far.

Jones went on to have a phenomenal professional career, retiring in 2018 with a 66-9 record that cemented him as one of the sport's all-time greats. He is now a boxing commentator and is planning to fight Mike Tyson in an exhibition of retired greats later this year.

Deeply shaken and scarred, Park quietly retired at the end of the Seoul Games and spent the next 13 years as a middle- and high-school teacher in a rural seaside town before making a return to competitive boxing as a coach.

In a recent interview with The Associated Press, Park said his dream was to see one of his boxers pull off a convincing gold-winning performance in a future Olympics, which he said would possibly give him some sense of redemption and closure.

After three decades, it still stings that his gold is seen as a smudge on the image of the Games his country still glorifies as its coming-out party to the world.

“There’s hardened resentment built up in me that I will probably carry for the rest of my life,” said Park, 54, who now coaches the small municipal boxing team of Seogwipo City in the island province of Jeju.

“I didn’t want my hand to be raised (after the fight with Jones), but it did go up, and my life became gloomy because of that.”

Park still grimaces when talking about his match with Jones.

Desperate for Olympic glory, Park had gutted out the tournament with a broken right hand he suffered during training. He said it didn’t really matter until he met Jones, the one opponent in Seoul who was quicker than him.

With the injury taking away his right-hand, Park simply had no chance at slowing Jones, who was coming at him with “excellent speed, power and technique.”

“I was pretty quick for a middleweight, but Jones was at a different level,” Park recalled. “A boxer just knows whether he had won or lost a match. I thought I lost because I didn’t put up a fight deserving of a win.”

Park said he felt “confused” when the referee raised his hand. Wearing a stunned look on his face, Park awkwardly embraced and held up an expressionless Jones into the air.

He said he couldn’t wait to get off the podium, where he smiled weakly and slowly waved a bouquet of flowers toward the stands as fans let out hesitant cheers and scattered boos.

An even more humiliating moment came when a South Korean national broadcaster invited all of the country's 12 gold medalists to a live TV celebration shortly after the Games. The host treated Park like he wasn't there while interviewing each of the other 11.

There was an outpouring of media criticism and what Park described as “unspeakable” insults, which included derisive public calls for him to forfeit his medal.

The emotional distress “was like being hit with a hammer on the back of your head, again and again."

“I keep thinking how my life would have been happier had I finished second,” Park said. “A gold medal is important, but isn’t any Olympic medal satisfying and glorious?”

Park said the sense of defeat and depression sometimes led to suicidal urges. He credits his wife for helping him navigate out of his darkest moods. The couple contemplated moving to a different country before deciding to stay after they had children.

Their youngest child, Rei, now a 20-year-old college student in Louisiana, has his own athletic ambitions, training as a javelin thrower with dreams of competing in the 2024 Olympics.

Park said he keeps his Olympic gold framed on a wall at his home in mainland South Korea, along with other awards he won in amateur competition. He doesn’t recall ever bringing it out of the house.

While Park doesn’t have many regrets about never going pro, saying he probably wouldn’t have gone far with an evasive style built for efficiency and avoiding hits but not for initiating pain, he still watched Jones’ post-Olympic triumphs with envy.

He wondered whether the public would ever forget the fiasco surrounding his gold medal, which the South Korean media brought up after almost every Jones fight or whenever there was controversy in any Olympic sport. He would try to laugh it off whenever students asked about his gold at school.

After overlooking him for years, South Korea’s boxing association reached back to Park in 2001, asking him to coach the national team following years of disappointing performances in international events, which reflected a dearth of talent in the sport.

During his on-and-off coaching stints with the national team since then, Park trained several boxers who performed decently in various events, but they never came close to an Olympic gold.

Park had the highest hopes for Lee Ok-song, who won the men’s 51-kilogram division in the 2005 World Amateur Boxing Championships. But Lee failed to reach the quarterfinals of the 2008 Olympics in Beijing and retired after the games.

Park said he had occasionally kept in touch with Jones, including a brief telephone conversation with him in 2004 while visiting Atlanta for an international event.

The International Olympic Committee in 1997 concluded it had found no evidence to support bribery allegations against the judges who voted in favor of Park in the Seoul Games. The U.S. Olympic Committee had called for an investigation in 1996 after documents belonging to East Germany’s Stasi secret police revealed reports of judges being paid to vote for South Korean boxers.

While Park left South Korea’s national team after the 2016 Games in Rio de Janeiro, he hasn’t given up on his goal of winning an Olympic gold as a coach.

Among the four boxers he trains in Seogwipo, Park is most impressed with Kang Hyeon-bin, who competes in the men’s 64-kilogram division, and Cho Hye-bin, a woman in the 51-kilogram category.

“I am constantly looking for a raw stone I could polish into a jewel,” he said. “I want to sculpt a true Olympic gold medalist with my own hands and see that fighter take the highest spot on the podium. That would restore my honor and allow me to leave the boxing ring for good.”