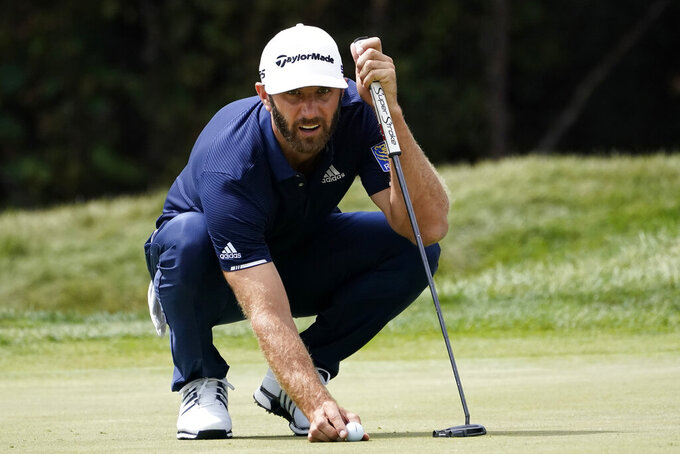 Dustin Johnson lines his putt on the first green during the final round of the BMW Championship golf tournament at the Olympia Fields Country Club in Olympia Fields, Ill., Sunday, Aug. 30, 2020. (AP Photo/Charles Rex Arbogast)

OLYMPIA FIELDS, Ill. (AP) — The USGA two months ago laid out the all-exempt field for a U.S. Open that could not have qualifying this year because of the coronavirus pandemic. One of criteria was to use the world ranking from Aug. 23 to fill out the 144-man field.

It never said when it would turn to the world ranking. And that made all the difference.

Among the final categories to be completed were the top five from the FedEx Cup standings this year who were not already exempt. That was set Sunday after the BMW Championship, with the top 30 advancing to the FedEx Cup finale.

Harris English, Lanto Griffin, Sebastian Munoz and Joaquin Niemann were among the top 30 who were not already in the U.S. Open. Next in line was Kevin Streelman (No. 32). So they were set for Winged Foot on Sept. 17-20.

Five more exemptions were decided by a three-tournament series on the Korn Ferry Tour. Add two withdrawals — 2018 British Open champion Francesco Molinari and Jung-Gon Hwang from the Japan Golf Tour money list — and that left 11 spots to fill the field.

The USGA, however, decided to fill the field on Monday off the Aug. 23 world ranking. Among the 11 added were Streelman, English, Niemann and Griffin. All of them would have gotten in through the FedEx Cup.

That means when the USGA adds the top five players available from the FedEx Cup, those spots will go to Munoz, Brian Harman, Tyler Duncan, Mark Hubbard and Danny Lee.

If the USGA had waited until the Tour Championship was over to fill the field through the world ranking, the 11 spots would have gone down to Paul Waring, Branden Grace, Rory Sabbatini and Doc Redman.

It's all about timing, and it's a great perk for someone like Hubbard. Since turning pro in 2012, he has never missed U.S. Open qualifying. He has never made it either, coming within a few shots in 2012 in San Francisco and in 2018 in Houston.

The field is not official until next Monday.

“It would be amazing, definitely a cap to the season I've had," said Hubbard, who had a career-best finish in the FedEx Cup at No. 44. “If I do end up there, I will have earned it. But it's not like I was looking at the board going, ‘If I can finish 38th, I’ll get in the U.S. Open.' But it will be confirmation of how I played this year.”

Meanwhile, international players who did not come over to San Francisco for the PGA Championship — Lee Westwood and Thomas Pieters, for example — all filed entry forms by the deadline, which would indicate they plan to play.

Francesco Molinari is skipping his second major of the year at the U.S. Open, with no indication he will play the Masters. His last tournament was the Mexico Championship in late February, and he remains the only player in the top 50 to have not played since golf returned from the COVID-19 pandemic-caused shutdown.

“I am the only one who has not returned. I am well aware of it, but it is not the first time that I have made different or unpopular choices,” Molinari said Tuesday during a series of tweets in Italian. He was referencing his decision to skip the 2016 Olympics in Rio de Janeiro.

A big part of the time off is moving is family from London to California this summer. “I took a break to manage a change of life with my family,” he said.

Molinari said his health is fine and he doesn’t think he is burned out.

He said his return will depend on the schedule and “I hope it will be as soon as possible.”

Charles Howell III is providing financial support and a strong voice to boost the Advocates Professional Golf Association Tour, a tour that began 10 years ago for minority players.

He is donating $100 for every eagle and $50 for every birdie to the APGA Tour and the Advocates Foundation, the charitable arm that reaches inner-city children to promote healthy lifestyles and provide scholarships.

In an Instagram post last month, Howell said he wanted to partner with the APGA Tour to create more opportunities for minorities in golf.

“I believe in a better America, and I want to be part of the solution,” he said.

The APGA Tour has up to eight tournaments with over $250,000 in prize money. The Lexus Cup Bonus Pool provides an additional $30,000 for APGA Tour members. The tour also has a division for amateurs with a handicap index of 5 or less.

Farmers Insurance has pledged to match Howell’s donation. The company got involved with the APGA Tour in January when it staged a tournament at Torrey Pines on the North Course during the weekend of the Farmers Insurance Open.

“It is a privilege to take this step in support of the APGA and its programs to develop African American talent and advance the cause of diversity in professional golf,” Howell said. “We’re all more aware now in the wake of the George Floyd tragedy and I see this as just one step in what I hope can be an industry-wide initiative. The APGA has been working at this for a decade now. The organization has made great strides. I want to help them meet their moment.”

THE OTHER TOUR CHAMPIONSHIP

Lanto Griffin was in the final group at the season-ending Tour Championship, two shots behind going into the last day. Also in the mix was Scottie Scheffler, four shots behind and two groups ahead. Harris English was poised to make a move, too.

That was the Korn Ferry Tour Championship one year ago this week.

Now they are together again, along with Brendon Todd, at East Lake for the Tour Championship that concludes the FedEx Cup on the PGA Tour. The winner gets $15 million. A year ago, the top prize for them was $180,000. At this Tour Championship, last place gets $395,000.

Griffin and Scheffler earned PGA Tour cards by finishing in the top 25. Todd earned his card from the top 25 in the Korn Ferry Tour Finals. English narrowly missed out and made his way back through conditional status on the PGA Tour.

English remembers that feeling of losing his PGA Tour card for the first time, and failing to get it done when he had a chance at the Korn Ferry Tour Championship.

“It really sparked me to work harder and to never put myself in that position again,” he said.

The U.S. Senior Women's Open will be at Brooklawn Country Club in Fairfield, Connecticut, on Aug. 19-22 next year, while the Senior LPGA Championship will be the following week at French Lick Resort in Indiana. Both majors were canceled this year because of the COVID-19 pandemic. ... According to the 15th Club, the BMW Championship was the first time Tiger Woods played all four rounds without making birdie or eagle on any of the par 5s. ... Golf Channel has added the Blessings Collegiate Invitational to its lineup of college events it will televise this year. The new men's and women's tournament will be Oct. 5-7 at Blessings Golf Club in Arkansas, a former NCAA site and home of the Razorbacks. Golf Channel also is televising the East Lake Cup in Atlanta in October and the Western Intercollegiate at Pasatiempo in California in the spring, along with the NCAA championships for men and women.

Dustin Johnson is 342-2-1 against the field in his last three tournaments.

“This is why you celebrate your wins so hard because you’re going to have times like this. You hope you don’t. But like I said, it’s a hard game, and you’ve got to take the good with the bad.” — Marc Leishman, who has missed four cuts and finished only one tournament under par since returning from the shutdown.