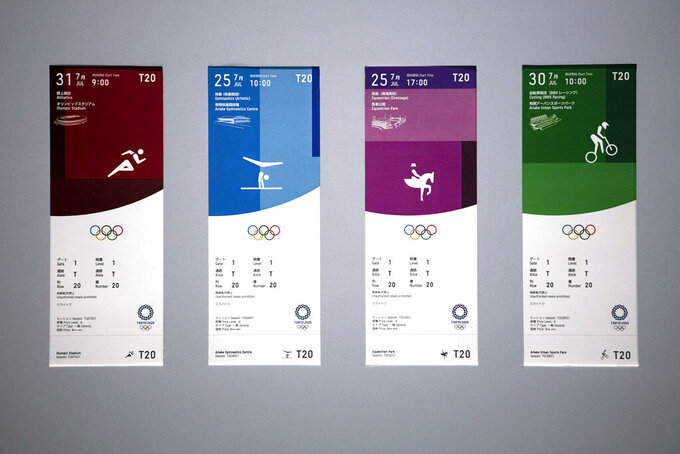 FILE - In this Jan. 15, 2020, file photo, tickets for the Tokyo 2020 Olympics are on display, in Tokyo. The unprecedented postponement of the Tokyo Olympics until next year due to the coronavirus pandemic, has left buyers of millions of tickets in a quandary. Tokyo organizers and the International Olympic Committee say the Games will take place, but they have offered few details about how. (AP Photo/Jae C. Hong, File)

The unprecedented postponement of the Tokyo Olympics has left buyers of millions of tickets in a quandary. Will the games happen next year? Will non-Japanese fans be allowed? Will there be any fans? How will health and travel restrictions be applied? Will there be a vaccine and quarantines?

Tokyo organizers and the International Olympic Committee say the games will open on July 23, 2021, and the competition schedule remains virtually unchanged. But they've offered few details, and specifics aren’t expected until the fall and into next year as the COVID-19 pandemic evolves.

“We have some people saying there is no way Tokyo 2020 is happening, and other people are saying it’s absolutely going to happen and ‘I’m going to be there for every moment of it,’" said Ken Hanscom, the chief operating officer of the Los Angeles-based firm TicketManager.

Olympic ticketing is always confusing, a maze of interests including official ticket resellers, national Olympic committees and sports federations, sponsors and advertisers, and local organizers and the IOC.

Invariably at every Olympics, an event is listed as “sold out" although the venue is half-filled because some VIPs or hospitality guests haven't shown up.

Four years ago in Rio de Janeiro, IOC member Patrick Hickey of Ireland was arrested for scalping tickets. He has maintained his innocence. Japan has passed an anti-scalping law specifically because of the games, though it has several loopholes.

The Chinese e-commerce, data and technology company Alibaba is taking over ticketing for the 2022 Beijing Winter Olympics, and likely beyond. Alibaba owns Damai, one of China’s largest ticketing platforms, and is also an IOC sponsor.

Olympic tickets for residents of Japan were sold through the local organizing committee. It says refunds for the postponement "will be carried out” no earlier than this fall. This seems straightforward.

It's more complicated for non-Japan residents.

Those outside Japan purchase through so-called Authorized Ticket Resellers appointed by national Olympic committees. They can charge a 20% handling fee on tickets, and are allowed to package desirable tickets with premium hotel packages. They also set the foreign currency exchange rates.

In Brazil four years ago, CoSport, the ATR for the United States, used a currency exchange rate that drove up ticket prices.

There are dozens of ATRs, and they've applied varied terms, conditions and deadlines for seeking refunds. The largest ATRs are: CoSport/Jet Set Sports, the only ATR for the United States; Cartan, which covers much of Latin America; MATCH Hospitality for Brazil and Russia; Kingdom Sports for much of Asia and Africa; Fanatic Sports for India.

Christopher Chase, an attorney based in New York who specializes in sports, intellectual property and media, looked at the “Terms and Conditions” set out by Tokyo organizers regarding ticket use. He said the “force majeure” clause was defined broadly enough to cover the pandemic and health crisis.

“Force majeure” spells out unforeseeable circumstances that prevents a contract from being fulfilled.

But he noted that local organizers had already committed to paying refunds for the postponement, as have many ATRs.

“It's all a bit confusing as each set of terms seem to direct to the other party's (terms),” wrote Chase, a partner in the law firm Frankfurt Kurnit. “But it does appear that tickets refunds are possible, regardless of whether a force majeure event occurs.”

Tokyo organizers say at least 70% of 7.8 million tickets were set aside for buyers in Japan. About 4.5 million tickets have been sold to Japan residents, with ticket sales expected to be worth at least $800 million to local organizers, their third largest source of income.

Hanscom said the uncertainty was pushing down hotel prices in Tokyo. This is accentuated as organizers say they'll “simplify” the Olympics and cut back on officials, hospitality and media, freeing up blocks of hotel rooms.

The Associated Press emailed about a dozen ticket buyers in the United States who purchased from CoSport. Some are keeping their tickets and plan to go. Some returned tickets but still plan to go and buy later. Others canceled plans to go altogether.

Andrew Pham, a commodities trader in Spokane, Washington, summed it up. He has invested $2,500 in tickets and still plans to go.

“I would say at this point, no one should be buying or holding any tickets that they couldn’t afford to lose,” he said.

Pham said he assumes that CoSport will be unlikely to return money if the Olympics are canceled.

“I couldn’t imagine that they would have the cash liquid to refund people. The terms and conditions are also quite ominous," he said.

Sharon delPilar, a stage manager in Las Vegas, is also going ahead and has spent $800 on tickets.

“I’m willing to run the risk — to a certain degree,” she wrote. “Everything else I have purchased (hotel and air) has been made with the option of refunds/cancellation. I trust all efforts will be made to work things out.”

Thomas Armbrustmacher, an accountant in Fowler, Michigan, said he has invested almost $1,000 in tickets and is also taking a chance.

“I am willing to take the risk that I will not get a ticket refund,” he wrote. “I am being cautious on what I buy from here on out though because if cancellation results in no refund, I don’t want to lose too much more money than I have already spent.”

Brandon Nagata, a state employee in Honolulu, said he spent about $3,400 on tickets and had returned some for a credit card refund, minus the non-refundable service fee. He returned other tickets in exchange for credit for a next-time buy. No service charge was taken out. He still plans to attend.

He was critical of CoSport setting the refund deadline on July 31 — a year away from the opening. He said CoSport also did not make the deadline widely known.

Lora Cesana, who works as a film and television designer in Des Moines, Iowa, returned about $2,000 in tickets. She said she and her husband, who also has an Italian passport, decided this was not the right time for an Olympics. They both are former New York City residents.

“We witnessed friends and family in Milan and New York go through this crisis,” she wrote. “It was clear to us that it was not the right time to travel to Japan for a large gathering such as the Olympics.”