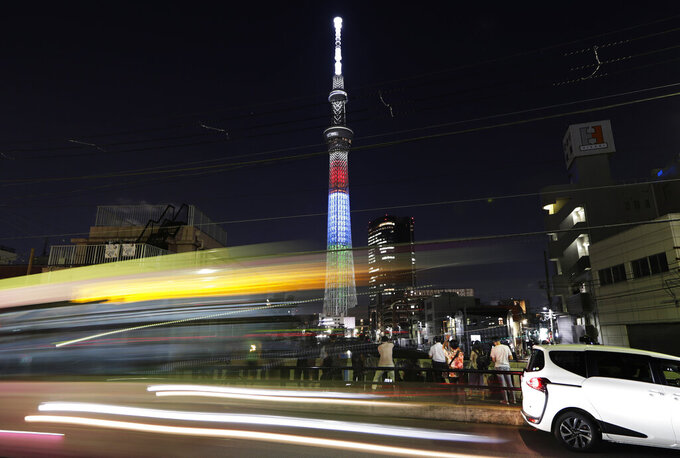 During a long exposure catching a streak of light from passing cars, journalists report on the special lighting of the Tokyo Skytree in red, blue and green; the symbol colors of the Tokyo 2020 Paralympic Games, in Tokyo on Monday, Aug. 24, 2020. The lighting Monday marked one year to go before the planned opening of the Paralympics that was postponed due the the coronavirus pandemic. (AP Photo/Hiro Komae) 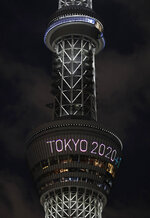 TOKYO (AP) — The Tokyo Skytree was lighted in red, green and blue on Monday to mark one year to go for the opening of the Paralympic Games.

The Olympics and Paralympics were to take place this year but have been postponed because of the COVID-19 pandemic.

Tokyo Olympic organizers have also announced that the Olympic flame that has been in Tokyo since it arrived from Greece in March will go on display beginning on Sept. 1 at the Japanese Olympic Museum in Tokyo.

Organizers say the flame will remain there until Nov. 1. It is not clear where it will be located after that.

The Olympics involves 11,000 athletes and the Paralympics 4,400. Organizers have said only that they plan to scale back and simplify, but have said they will not begin sharing details until the fall.

In a poll published last week by the Kyodo news agency, a majority of Japanese companies among almost 13,000 surveyed opposed holding the Tokyo Olympics and Paralympics next year.

The survey showed 27.8% want the games to be canceled, and 25.8% said they should be postponed again.

Japanese organizers and the International Olympic Committee have said if the Olympics can’t be held next year, they will be canceled.

In the survey, 46.2% said they wanted the games to go ahead in some form — with fans, or without fans.

Japan is heavily invested in the Olympics and is officially spending $12.6 billion, though a government audit says the number is twice as large.