Uchimura positive for COVID-19 just a week before key meet 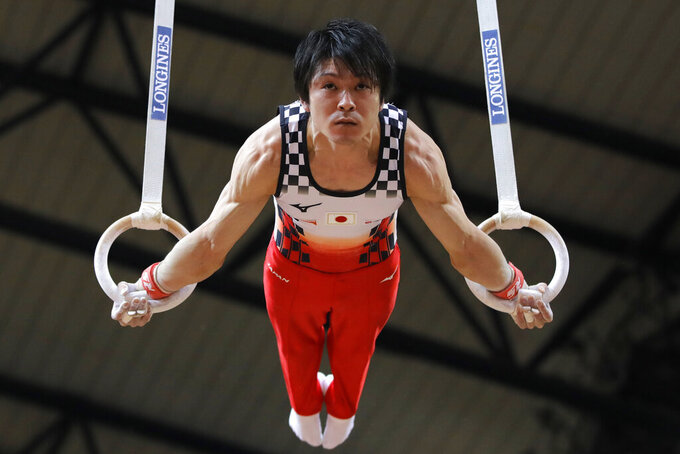 FILE - In this Oct. 29, 2018, file photo, Japan's Kohei Uchimura performs on the rings during the men's team final of the Gymnastics World Championships at the Aspire Dome in Doha, Qatar. Japan's Kyodo news agency has reported that Uchimura has tested positive for COVID-19 and comes just over a week before an international gymnastics meet that will test countermeasures against the coronavirus. (AP Photo/Vadim Ghirda, File)

The positive test was reported by the Kyodo news agency on Thursday and comes just over a week before an international gymnastics meet in Tokyo that will test countermeasures against the virus.

The meet on Nov. 8 will involve eight gymnasts each from Japan, Russia, China and the United States. Uchimura was slated to participate.

The positive test could be a setback in trying to convince the world it will be safe to hold the postponed Tokyo Olympics next year. More than 15,000 Olympic and Paralympic athletes will have to enter Japan. Add to that thousands of officials, judges, media and broadcasters. It is also unclear how many fans will be allowed to attend — and from where.

Uchimura has said, because of shoulder injuries, he will not attempt to defend his overall title next year and will compete instead on the horizontal bar.

Just over 1,700 deaths in Japan have been attributed to COVID-19. The number is relatively low, but Olympic organizers face a major problem of opening the borders to athletes from more than 200 nations and territories. Many of those areas have not controlled the virus as well as Japan has.