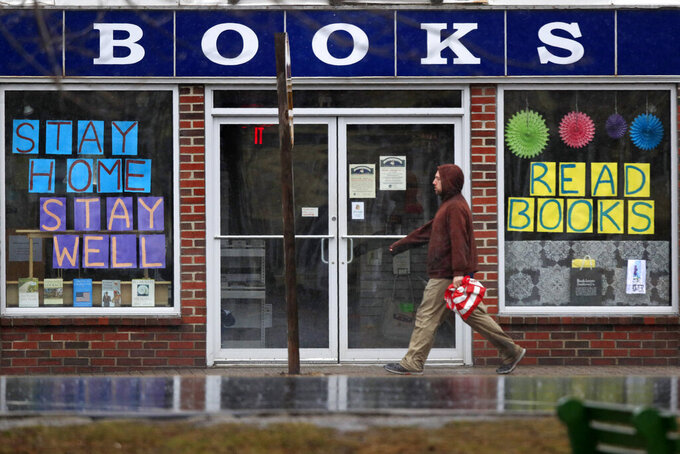 There were about 23,800 initial claims for unemployment compensation during the week that ended March 28, the Maine Department of Labor said. The previous record was about 21,500 claims a week earlier. There had been fewer than 700 claims a week before that in Maine, which had been riding a long streak of very low unemployment.

There have been more than 375 cases of the virus and eight deaths in Maine, public health authorities said Thursday.

For most people, the new coronavirus causes mild or moderate symptoms, such as fever and cough that clear up in two to three weeks. For some, especially older adults and people with existing health problems, it can cause more severe illness, including pneumonia, or death.

The Maine Department of Labor said in a statement that the virus “has caused significant economic hardship for Maine people and job losses across the state, particularly in the food services and lodging, health care and social assistance, retail trade and manufacturing industries.”

The U.S. Department of Veterans Affairs said Thursday that a patient in their 70s at the VA Maine Healthcare System's Togus campus died due to complications from COVID-19. The agency said it was the first VA Maine veteran death due to the virus. The VA has implemented safety measures to ensure safe care at the facility, the agency said.

The Maine Department of Inland Fisheries & Wildlife issued guidance on Thursday that many outdoor activities are still allowed during the stay-at-home order issued by Democratic Gov. Janet Mills on Tuesday.

Activities such as hunting, fishing, wildlife watching, boating, kayaking and fiddlehead foraging are still allowed, the department said. Outdoor lovers are asked to stay 6 feet away from other people and stick to lesser-known spots, preferably close to home, the department said.

Maine might have received its final shipment of personal protective equipment, or PPE, from the federal government for a while, Maine Center for Disease Control and Prevention director Nirav Shah said Thursday. The equipment is important for health care workers, who make up more than a sixth of the people who have confirmed cases in Maine.

Shah also said he was concerned about “rumors and reports of remedies” for coronavirus that are circulating in the community. He encouraged residents to be skeptical and get information from trusted sources, such as his agency. There is no approved treatment or vaccine for the virus.

“Exercise caution and some healthy skepticism when reading information, even from the best-intentioned folks. Help friends and family members separate fact and fiction here,” Shah said.