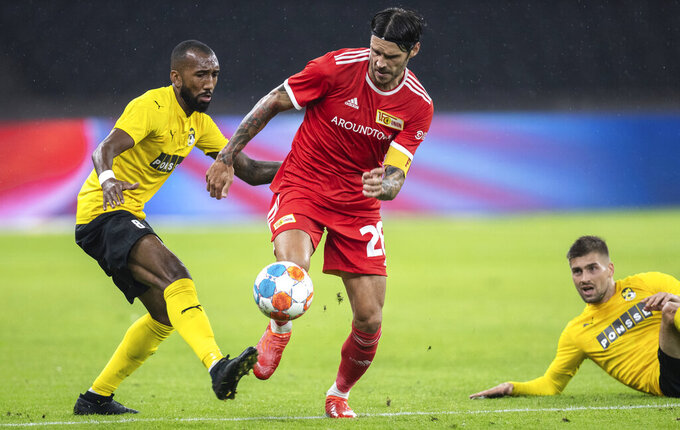 Rangel of Kuopio PS, left, fights for the ball against Berlin's Christopher Trimmel during the Europa Conference League second leg play-offs soccer match between Union Berlin and Kuopio PS, at the Olympiastadion in Berlin, Thursday, Aug, 26, 2021. (Andreas Gora/dpa via AP)

BERLIN (AP) — Union Berlin qualified for European football for the first time in 20 years on Thursday — and did so while playing in its city rival Hertha Berlin's home stadium.

Union earned a spot in UEFA’s new third-tier Europa Conference League competition on Thursday with a scoreless draw against Kuopion Palloseura in Berlin’s iconic Olympiastadion, securing a 4-0 aggregate win over the Finnish team in their playoff.

Union hasn't played in European competition since the now-defunct UEFA Cup in 2001-02, but it was forced to host this game at its rival’s stadium because its own does not have enough seating capacity to meet UEFA demands.

Union usually plays at Stadion An der Alten Försterei in the eastern borough of Köpenick, where the vast majority of the 22,000 places are standing only.

But the club did its best to make Olympiastadion its own, covering up the blue running track around the field and covering both ends in its own preferred red. It also flew red-and-white Union flags all around the stadium.

“I had to smile a bit, it doesn’t look so bad,” Union defender Marvin Friedrich said before the game.

The stadium was also illuminated in red for the occasion, ensuring any passing Hertha fans would see the transformation. More than 22,000 Union fans attended the game, though there was a huge banner facing the field declaring “we need the Alten Försterei like we need air to breathe.”

Still, they jumped up and down and sang as if they were in their spiritual home, filling the 80,000-capacity stadium with a noise level it rarely reaches on matchdays when Hertha plays.

Hertha has been using the stadium, which was built for the 1936 Olympics, since the Bundesliga was founded in 1963. But it has been struggling in recent years.

It remains the only Bundesliga team without a point after two rounds this season, and it was battling relegation in the previous two despite backer Lars Windhorst’s investment of 375 million euros to help establish it as a “Big City Club” capable of challenging Germany’s best.

While Hertha has been floundering, Union has been thriving since securing its first promotion to the Bundesliga in 2019. Union finished 11th in its first season in Germany’s top division, then seventh last May to secure its Europa Conference League playoff.

“It’s a funny feeling,” Hertha coach Pál Dárdai had said of seeing Union at home in the Charlottenburg-Wilmersdorf borough of the city. “But we’ll cross our fingers. If they’re successful they are welcome from me to use the stadium up to the final. ... If they need it, they should use it. But please don’t damage the grass.”

Union will find out Friday which teams it faces next in the Europa Conference League group stage. The competition begins Sept. 16.