US beats Australia, sets up gold medal rematch with Japan 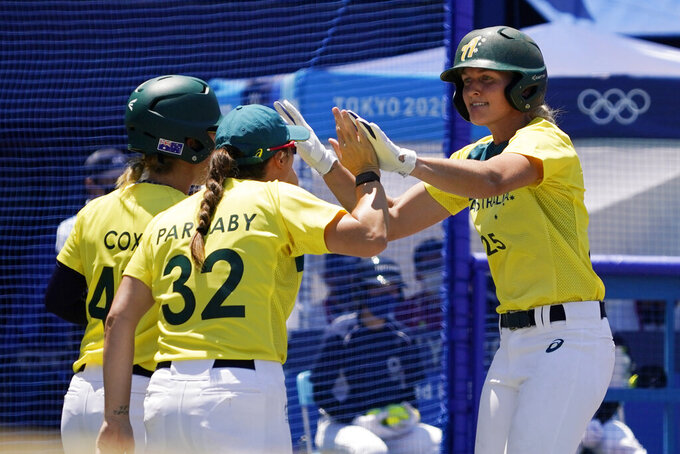 Australia's Chelsea Forkin (25) celebrates with teammates after scoring in the eighth inning of a softball game against United States at the 2020 Summer Olympics, Sunday, July 25, 2021, in Yokohama, Japan. (AP Photo/Sue Ogrocki)

YOKOHAMA, Japan (AP) — The United States had just given up its first run and was two outs away from losing for the first time in the Olympic softball tournament.

Amanda Chidester stepped up to the plate with two runners on and slapped the ball into left field.

Pinch-runner Ally Carda and Haylie McCleney came across the plate on Chidester's eighth-inning single, giving the United States a pulsating 2-1 victory over Australia on Sunday and a rematch with defending champion Japan in Tuesday's gold medal game.

Monica Abbott (2-0) struck out 13 and threw a three-hitter in a 126-pitch complete game, giving up an unearned run when Jade Wall walked on eight pitches with the bases loaded in the top of the eighth to force home the automatic runner.

With pinch-runner Ally Carda on second as the automatic runner in the bottom half, leadoff hitter McCleney reached against Tarni Stepto (0-1) with an infield single on a 1-0 pitch. McCleney hit a two-hopper to shortstop Clare Warwick, who set her feet before throwing, allowing McCleney to get on base for the fourth time in the game. She is batting .727 (8 for 11) and has reached 13 times in 15 plate appearances.

Janie Reed, the wife of major league reliever Jake Reed, sacrificed for the fourth time in the tournament, putting runners at second and third.

“Give me a strike, and I’m going for it,” Chidester recalled thinking to herself.

She swung at a pitch on the outer half of the plate and singled sharply past a diving Warwick. Wall picked up the ball two steps onto the outfield grass and heaved home, but first baseman Taylah Tsitsikorinis cut off the throw as Carda and McCleney scored standing up.

Chidester slid into second, taking the extra base just in case a runner ahead of her was thrown out. When she popped up, she saw teammates running onto the field to celebrate.

Abbott walked six batters, two of them intentionally. She has a 0.00 ERA and two saves, allowing four hits in 17 innings with 28 strikeouts and nine walks. Abbott improved to 5-0 in her Olympic career.

After scoring just seven runs in four games, the U.S. and Japan (both 4-0) play on Monday in a matchup that will determine only which team bats last in the gold medal game, the fifth straight for the Americans have reached.

“We’ve got Fire and Ice throwing for us right now, and they’re throwing the ball really, really well,” U.S. coach Ken Eriksen said, referring to his nicknames for Abbott and Cat Osterman.

Abbott escaped a bases-loaded jam in the sixth.

Australia went ahead in the eighth after automatic runner Belinda White took third on Leigh Godfrey's sacrifice. Stacey Porter was intentionally walked for the second time, Taylah Tsitsikronis walked, Chelsea Forkin took a called third strike and Wall fouled off a pair of 3-2 pitches before taking an inside pitch. She has driven in three of Australia’s four runs in the tournament.

McCleney's first-inning triple was wasted as the U.S. went 0 for 6 with runners in scoring position before the eighth, dropping to 3 for 31 in the Olympics. The teams combined for eight hits, and through 12 games the six countries in the tournament were batting .192 with a .564 OPS, making Major League Baseball’s .241 and .720 OPS seem robust.

Abbott, who turns 36 on Wednesday, and the 38-year-old Osterman are the last remaining players from the team that lost to Japan 3-1 in the 2008 gold medal game in Beijing.

“Hopefully,” Eriksen said, “get back on an airplane to go across the Pacific undefeated.”

Eri Yamada singled off Danielle Lawrie (0-1), the 34-year-old sister of former major leaguer Brett Lawrie, to drive in the winning run in the eighth against Canada (2-2).

Japan had loaded the bases in the seventh after Yamada singled and pinch-hitter Sayaka Mori reached on a one-out error by shortstop Janet Leung, who dropped the ball while taking it out of her glove. After an intentional walk loaded the bases, Yika Ichiguchi lined out to second and Minori Naito popped up.

Yu Yamamoto sacrificed Naito, the automatic runner, to third starting the eighth, and a pair of intentional walks brought up Yamada. Japan’s 37-year-old captain lined a single to center.

The game was delayed for about 14 minutes in the bottom of the fifth when umpires blocked Canada manager Mark Smith from bringing in Lawrie, saying it was a violation of substitution rules. Smith protested, and a World Baseball Softball Federation committee ruled in favor of Canada.

Chelsea Gonzales hit an RBI double in the second, Sydney Romeo had a solo homer in the third and Anissa Urtez chased Greta Cecchetti (0-3) with a two-run homer in the fifth, her second home run of the tournament. Brittany Cervantes greeted Alexia Lacatena with another homer.