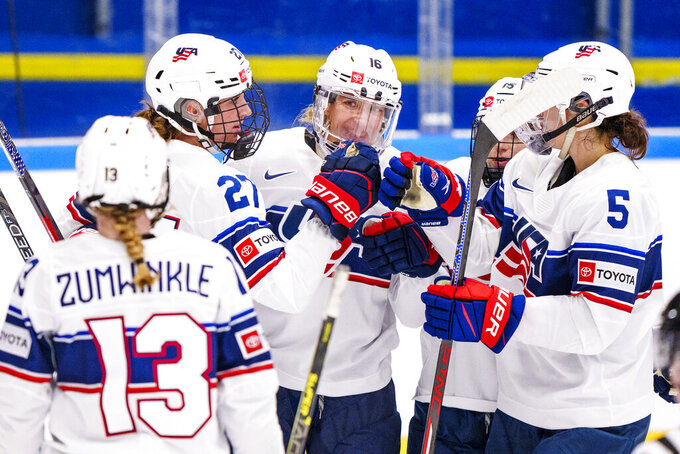 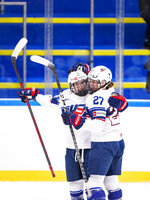 HERNING, Denmark (AP) — The United States routed Japan 10-0 in the opening game of the women's hockey world championship on Thursday and defending champion Canada started the tournament with a 4-1 victory over Finland.

The Americans had nine different scorers against Japan, with Alex Carpenter the only player to net twice. Taylor Heise went scoreless but equaled a tournament record with five assists for the U.S., which led 9-0 after two periods and outshot Japan 62-6.

Olympic and world champion Canada faced tougher resistance from Finland, the bronze medalist at the Beijing Games in February.

Marie-Philip Poulin had a goal and assist for Canada in the first period but Finland stayed within one goal until Meaghan Mikkelson made it 3-1 with seven minutes left of the second. Blayre Turnbull added the fourth into an empty net.

Finland missed a penalty at the end of the first period when Kiira Yrjanen's shot was saved by Ann-Renée Desbiens.

In Group B, Sweden beat host Denmark 5-2 behind a hat trick from Hanna Olsson and Hungary upset Germany 4-2.

The United States next plays Finland on Saturday, when Canada faces Switzerland. The two North American rivals are both in Group A and play each other in the last preliminary round on Tuesday.

Canada beat the U.S. in the final of both last year's worlds and the Olympics.