US curlers have epic Olympic entrance behind skip Shuster 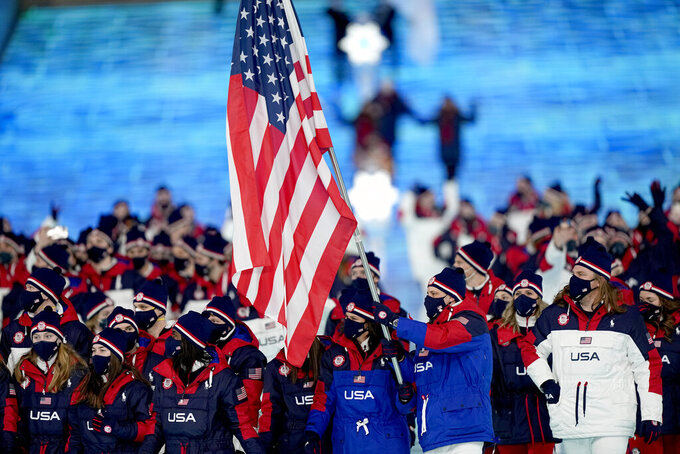 Brittany Bowe and John Shuster, of the United States, leads their team in during the opening ceremony of the 2022 Winter Olympics, Friday, Feb. 4, 2022, in Beijing. (AP Photo/David J. Phillip)

BEIJING (AP) — About the only way the U.S. men’s curling team can top its entrance at the Beijing Olympics is by winning another gold medal.

Skip John Shuster carried the American flag into the Bird’s Nest for the opening ceremony along with speedskater Brittany Bowe on Friday night. Shuster’s teammates, including two who were with him when the Americans won their first Olympic curling gold medal four years ago, walked in just behind him, arm-in-arm.

“Being able to experience that, honestly, with another athlete, and to lead all of Team USA was the biggest honor of my career to this point,” said Shuster, a five-time Olympian who also won a bronze at Turin in 2006.

Shuster was the first curler to carry the U.S. flag at the Olympics, a sign of how popular the sport has become since the Americans’ dramatic win at Pyeongchang in 2018, when they survived five straight elimination matches.

“I had the best seat in the house, baby. I was right behind him,” teammate Matt Hamilton said Saturday.

Hamilton was still buzzing about a photo his sister, Becca, a member of the women’s team, took from just behind the men’s team as it entered the stadium. It shows Hamilton, Chris Plys, John Landsteiner and alternate Colin Hufman arm-in-arm, with Shuster waving the flag and the Olympic rings in the background.

Hamilton called it “one of the most epic photos I have ever seen. I don’t know if she realized it when she took it, but that photo is incredible and I’m just super stoked to be a part of it. It kind of felt very fitting that John was up there and the four of us teammates behind, linked arm-in-arm, had his back, just like we always do. It just felt like a really perfect start to this Olympics.”

Shuster and Hamilton said that while there is pressure being the defending gold medalists, they aren’t going to let it overwhelm them.

“Honestly, for us as athletes, the fact that we got to reach the pinnacle of our sport … we’ll always be Olympic champions,” Shuster said. “That will be something we always get to carry with us. That’s kind of let the pressure off me. I’ve always cared so much about going to the Olympics and having a great performance. Getting to be on the top of that podium I think has taken the pressure off and I think we’re just really going to go out there and enjoy the opportunity to try to defend.”

The men’s competition starts Wednesday at the Ice Cube.

“Can’t take that medal away from me now,” Hamilton said with a laugh. “Just stoked to be back and obviously the first go-around went well. That’s all I know. Hoping to do it again.”

Hamilton said he had a moment after the 2018 Games when he had to decide if he was content with one gold medal or wanted to go for another. Plus, there’s the social aspect of being in the tight-knit curling community.

“I realized I was still hungry and love competing,” he said. “Playing against all my friends is kind of a dream come true from all the other countries. They’re all awesome people. I had some of the guys from the Swedish team come to my wedding the summer before the Olympics. So just the friendships I’ve cultivated through curling is another big reason that I just wanted to continue to compete so I could go around and see all my buddies again.”

Shuster’s Olympic career has had its ups and downs. He won bronze in 2006, the first U.S. Olympic curling medal of any color, as the lead for Pete Fenson’s team. He left to form his own rink, earning a trip to the Vancouver Games but performing so badly that he benched himself.

After finishing last in 2010, Shuster won the U.S. trials again four years later but managed just a ninth-place finish in Sochi. When USA Curling put together a high-performance camp of the country’s top 10 players, Shuster didn’t make the cut.

So he put together a foursome called “Team Rejects” and not only beat the federation-backed squads in the U.S. trials but won gold in South Korea.

Now it’s back to being Team Shuster.

“We are definitely a team,” Shuster said. “Someone said if you could describe your job, I’m like, ‘I yell at my employees for a living and I’m treated as if I’m their boss, but I’m not really their boss.’”