U.S. curling expectations on rise after winning gold in '18 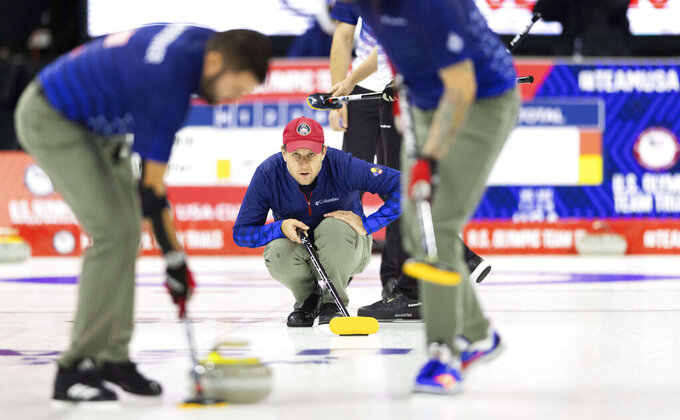 Team Shuster's John Shuster, center, watches as John Landsteiner, left, and Matt Hamilton sweep after throwing the rock while competing against Team Dropkin at the U.S. Olympic Curling Team Trials at Baxter Arena in Omaha, Neb., Wednesday, Nov. 17, 2021. "The expectation when we're sending a team to the world championships and Olympics now," Shuster said, "is that they should be a medal favorite and, if things go right, they could win the gold." (AP Photo/Rebecca S. Gratz)

OMAHA, Neb. (AP) — For most of John Shuster's international curling career, Americans had the mindset that everything would have to go right on the ice for a U.S. team to win even a bronze medal on the world stage.

The improbable gold won by Shuster's team at the 2018 Winter Olympics — the United States' first gold in the sport — prompted a collective attitude adjustment.

“The expectation when we’re sending a team to the world championships and Olympics now," Shuster said, "is that they should be a medal favorite and, if things go right, they could win the gold.”

“It should, and it needs to," he said. “I don’t think you run away from that. I say this often, that when you have success, you earn the right to demand more of yourself. We have to applaud what happened in 2018 and realize that that is over, and we have to go and try to achieve these things every year.”

Team Shuster is a heavy favorite to make it through the U.S. team trials this week and defend its Olympic title in Beijing. The best-of-three trials finals begin Friday night at Baxter Arena with Shuster playing Korey Dropkin's team on the men's side and Tabitha Peterson's team facing Cory Christensen's team on the women's side.

Shuster's first Olympics was in 2006, when he was a member of the Pete Fenson team that took bronze for the United States' first medal in the sport. It was still the Americans' only Olympic curling medal heading into the 2018 Games, with Shuster leading teams in Vancouver and Sochi that failed to make the medal rounds.

In Pyeongchang, Shuster and teammates Tyler George, Matt Hamilton and John Landsteiner rallied from the brink of pool-play elimination and upset favored Sweden 10-7 in nine ends in the gold-medal match.

Participation at the grassroots level has increased significantly across the country since then. There are about 200 curling clubs, and participation has grown from 20,000 to about 25,000.

The entire round robin was streamed on the NBC Sports app and NBCOlympics.com, and the finals will be live on NBC Sports Network.

Shuster said he has enjoyed being an ambassador for curling during its period of growth.

“It went from being an obscure kind of thing you'd see every four years,” Shuster said. “Now when it's at the Olympics, I guarantee you a lot more people in our country are searching to see when the curling games are going to be on rather than stumbling into whatever coverage there is.”

Shuster's team has a slightly different look. George has retired, and Shuster replaced him with Chris Plys. Hamilton and Landsteiner are back.

The team's top-six finish in the world championships in Canada in April locked up the United States' spot in the Olympics. Shuster and his players were discombobulated after the round robin when Plys tested positive for COVID-19. It was later determined to be a false positive, but Plush said the situation drained the team emotionally, and it lost in the first round of the playoffs.

“We were in a rhythm and in a spot where I thought we had a chance to win a world championship,” Shuster said. “We didn't even know Chris would be able to play until an hour before game time.”

Shuster said his team has been at its best in Omaha, but Plush expects no team to cruise through the trials finals.

“Team Shuster to date is our best team, but they're going to get pushed, as they should,” Plush said. “If they continue to be the best team, they’re going to earn it rather than just being the best of a good-enough group.”