US looks to build off Jackson's historic speedskating gold 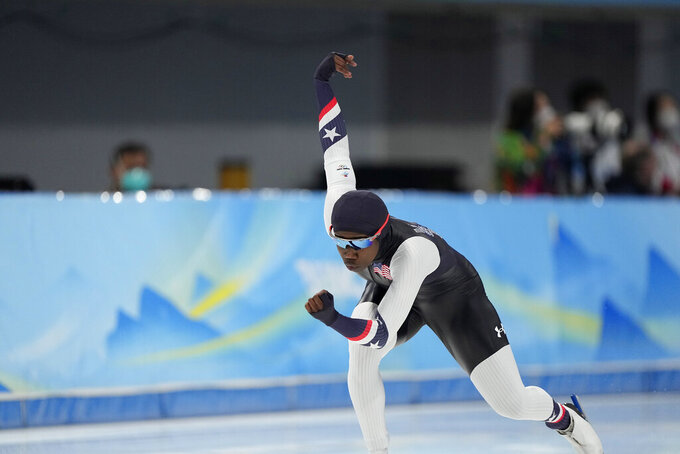 BEIJING (AP) — The U.S. speedskating team had been waiting for someone, anyone, to win an Olympic medal. The sport that has delivered more medals than any other for the U.S. in the history of the Winter Games has been in a deep freeze.

Erin Jackson provided a welcome thaw with a victory in the 500 meters Sunday, becoming the first Black woman to win an Olympic speedskating medal. It was the first speedskating medal of the Beijing Games for the Americans, and their first individual medal since 2010.

“We needed that bad,” Brittany Bowe said. “Obviously we’ve had a ton of success at the world level and have fallen far short at the Olympic level. That race was bigger than just Erin. That's for Team USA.”

The U.S. won just one medal four years ago in Pyeongchang, a bronze in women's team pursuit. At the 2014 Sochi Games, the Americans were shut out.

“We’ve taken a lot of punches on the chin the last couple Olympics, so it’s great we could celebrate tonight,” national team coach Ryan Shimabukuro said.

They hope to be doing a lot more of it in the second week of the Games.

Jackson's gold is the lone U.S. medal through eight events at the Ice Ribbon oval. The Americans didn't qualify anyone in the women's 5,000 or men's 10,000.

“I hope that that can be a springboard for something special to happen here in the next couple days,” Bowe said.

Kimi Goetz added, “It’s a good sign for our program.”

The U.S. men advanced to the team pursuit semifinals on Tuesday and are a favorite for gold.

Joey Mantia skates in the 1,000 on Friday and returns in the mass start on Saturday, the last day of speedskating. He finished sixth in the 1,500, where he had been a favorite to medal.

Jackson's gold was the first for an American woman since Chris Witty won the 1,000 at the 2002 Salt Lake City Games and the first in the 500 since Bonnie Blair won three straight titles from 1988 to 1994.

Jackson came into Beijing ranked No. 1 in the world in the sprint, having won four of eight races during the World Cup season.

“Even though she was one of the favorites going in, she knows how tight the field is. She knows that anything in the 500 can go wrong and you’re out, but she never let it get to her,” Shimabukuro said. “She focused on the process and didn’t worry about the results.”

Allyson Felix, the most decorated woman in Olympic track and field history, saluted Jackson with the tweet: “This!! Wow! Congrats @ErinJackson480.”

Jackson had been waiting a week to compete in her signature event in Beijing.

“I saw no nerves,” Bowe said of her longtime friend. “For her to be able to achieve that with the pressure she had on her, with the story, coming in as No. 1 ranked in the world, the level of respect is out of this world.”

Jackson almost didn't make it to Beijing. She slipped in the 500 at the U.S. trials and finished third. Bowe won the event and later gave up her spot on the team to Jackson. The U.S. ended up with a third quota spot, which allowed Bowe to compete in the sprint.

“What she did is going to be a springboard to give so many little girls and boys the opportunity to look up to someone that they haven’t been able to look at and relate to,” Bowe said. “That goes far beyond what any of us can imagine. She’s an incredible human, an incredible athlete.”