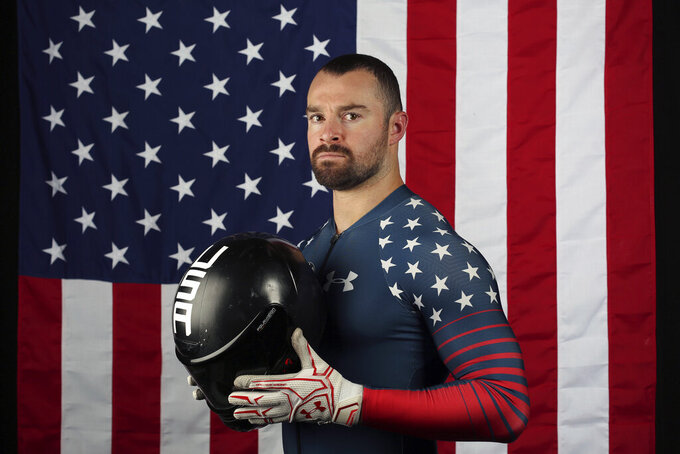 FILE - In this Sept. 26, 2017, file photo, United States bobsledder Carlo Valdes poses for a portrait at the 2017 Team USA Media Summit in Park City, Utah. Valdes, a member of the 2018 U.S. Olympic team, has announced that he is returning to the sport with hopes of making the team for the 2022 Beijing Games. (AP Photo/Rick Bowmer, File)

LAKE PLACID, N.Y. (AP) — Carlo Valdes, a member of the 2018 U.S. Olympic team in bobsled, has announced that he is returning to the sport with hopes of making the team for the 2022 Beijing Games.

Valdes was a push athlete on the team that finished 20th at the Pyeongchang Olympics in a four-man sled driven by Justin Olsen. Valdes hasn’t competed at the World Cup level since, taking the last two seasons off to focus on business interests.

“Time to get back to work,” Valdes wrote on Instagram. “Starting up my training again for Bobsled and on a war path for the 2022 Winter Games in Beijing. It’s been great building up my business career these past couple years but my athletic career still has some diesel left in it.”

The 30-year-old Valdes has won eight World Cup medals in his career as a push athlete, including a gold medal in two-man with the late Steven Holcomb in 2016 at the Americans’ home track in Lake Placid, New York.

If this sliding season happens as planned — an uncertain proposition because of the coronavirus pandemic — USA Bobsled and Skeleton will host the 2021 world championships at Lake Placid in February.