US Olympic leaders eye change on protests amid wary athletes 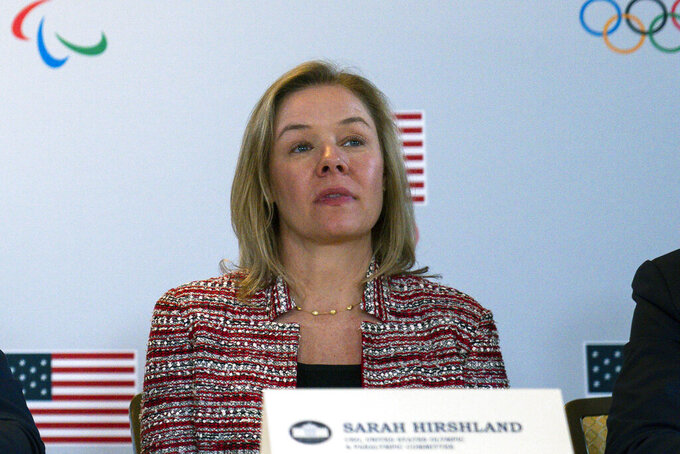 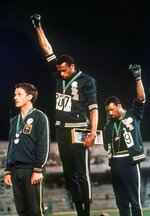 DENVER (AP) — The U.S. Olympic and Paralympic Committee is open to challenging IOC rules restricting protests at the Olympics.

At the same time, some of the very athletes the federation is trying to help are angered that they have been kept out of the loop in key decisions.

The federation, in response to the nationwide protests following George Floyd's killing, said it "stands with those who demand equality.” After that, CEO Sarah Hirshland announced the formation of an athletes' working group that will, among other things, look into changing the IOC’s longstanding rule banning political protests on Olympic medals stands.

But Hirshland’s first show of support for the athletes was immediately panned by Gwen Berry, the African American hammer thrower who drew a 12-month probation from the USOPC after she raised her fist on the medals stand last summer at the Pan American Games.

And Hirshland's second move was criticized because of frayed communications between the federation and its own athletes' advisory council. The AAC is supposed to represent all U.S. Olympic athletes and has long struggled for an equal spot in the decision-making process.

“I don’t think these are bad ideas,” said U.S Track and Field CEO Max Siegel, who, as leader of the sport that places the majority of African Americans on the U.S. Olympic team, has been facilitating discussions between athletes and the USOPC. “But the fact of the matter is that ... the stakeholders you’re trying to help, they want to be involved in the process, too.”

Berry’s complaint, in short, was that if the USOPC really stood with black athletes, it never would have sanctioned her.

She and Hirshland have spoken in what both have described as a productive conversation. But Berry isn't completely satisfied. In an open letter shortly after their talk decrying the realities of the billion-dollar business of the Olympics, she wrote: “What I object to is any pretense that the athletes, and their rights, come first.”

At about the same time Berry and Hirshland spoke, the CEO also listened to athletes in two town-hall-style video meetings. Spurred by the feedback, she announced the USOPC was forming an athletes group to “challenge the rules and systems in our own organization that create barriers to progress” on racial issues. It would also, she said, advocate for global change.

But that announcement came before a full consultation with the advisory council. The chain of events frustrated the leaders of the athletes' group.

“While there was a breakdown in communication last week with the USOPC, we must all focus on the larger task at hand: addressing life-threatening racial injustice,” said Cody Mattern, the AAC’s first vice chair.

Hirshland conceded, “I’ll be first to readily acknowledge that communication is always something that can be readily improved and we continue to work on it.”

After the announcement, another AAC member, gold-medal sprinter Moushaumi Robinson, was given a leading role and the AAC was assured it will be the main driver of the group.

Hirshland said the group will not only be focusing on the protest restrictions — codified in the IOC charter under “Rule 50” — but will also have a “much broader conversation about racism, and doing things that create a barrier to racism.”

A recasting of Rule 50 could be the sort of game-changing move that many athletes have sought since 1968, when sprinters John Carlos and Tommie Smith were sent home from the Mexico City Olympics for their indelible raised-fist salute on the medals stand.

The USOPC brings more athletes and more money to the IOC than any country. It has been reluctant to leverage its power since the departure of chairman Peter Ueberroth in 2008. It was Ueberroth who famously asked the rhetorical question: “Who pays the bill for the world Olympic movement? Make no mistake about it. Starting in 1988, U.S. corporations have paid 60% of all the money, period. Be sure you all understand that.”

But with sports leagues around the world reacting to the growing outrage over Floyd’s death — the NFL on Thursday said it was committing $250 million to social justice initiatives — eyes are pointed toward the Olympic movement, which has been historically slow to change.

“We call on the IOC and (International Paralympic Committee) to end this hypocrisy, stand by their athletes and abolish Rule 50,” the athletes' advocacy group Global Athlete said in a statement this weekend. “Athletes will no longer be silenced.”

Shortly after the USOPC's announcements of the past weeks, IOC President Thomas Bach said the committee's own athlete group would “explore different ways” opinions could be expressed during the games, while still “respecting the Olympic spirit.”

Hirshland describes the push in the U.S. for more racial sensitivity in the Olympic world not as a power play with the IOC but as an “obligation of leadership” that has to be conducted “in the spirit of humility, partnership and collaboration and open and honest dialogue.”

The USOPC's role would, of course, be strengthened by a unified voice from athletes who are diverse not only in race and background but also in their opinions.

Despite some differences, Siegel said there has been little argument among athletes over their feelings about the protest rule.

“During the conversations, I think what’s become crystal clear is that the very nature of Rule 50 embodies systemic racism,” he said. “Whether or not you understand what they’re trying to achieve with the rule, the rule itself is put in place to kind of restrict expression.”