US skating team stronger than most for recent world events 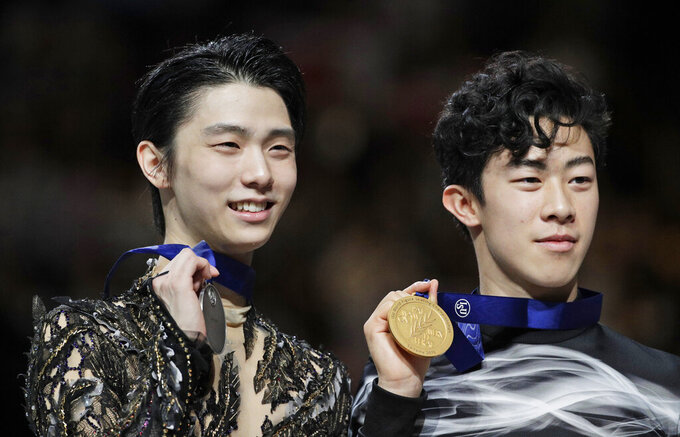 FILE - In this Saturday, March 23, 2019 file photo, Japan's Yuzuru Hanyu and Nathan Chen from the United States display their silver and gold medals respectively during the men's free skating routine during the ISU World Figure Skating Championships at Saitama Super Arena in Saitama, north of Tokyo. As Nathan Chen seeks a third straight World Figure Skating Championships title, something no American has achieved since Scott Hamilton got his fourth in a row in 1984, he has two major challenges in front of him. One is two-time Olympic gold medalist Yuzuru Hanyu of Japan, who Chen calls “the benchmark." The other is idleness in major competitions forced by the coronavirus pandemic. ((AP Photo/Andy Wong, File)

Multiple medals at the World Figure Skating Championships are rare for the United States. This year's team could reverse that trend.

And there couldn't be a better time than in a pre-Olympic season.

U.S. skaters have a strong chance of exceeding that total in Stockholm this week, maybe even with a possible women's medal considering the improvement by two-time national champ Bradie Tennell and some uncertainty about the normally dominant Russians. The last U.S. medal in women's competition was Ashley Wagner's silver in 2016.

“As most skating fans know, the ladies event is all about the talent of Russia and Japan,” says Johnny Weir, a three-time U.S. champion and now NBC's analyst, along with 1998 Olympics winner Tara Lipinski. “The most important thing for Bradie Tennell and Karen Chen to do is to finish as high as possible so Team USA might get three spots at the Olympics next February. Both U.S. ladies are impeccable in so many ways: Bradie Tennell has brilliant consistency and poise under pressure, where Karen skates with such beauty and flow. But challenging for the podium will be tough.”

“Going into worlds last year,” she says of the Montreal event canceled because of the coronavirus pandemic, “it really looked like it was going to be a Russian podium sweep. This year, there is a little more room at the top. Japan has a solid chance at the podium with Rika Kihira. But my prediction for the gold is Anna Shcherbakova with her incredible consistency and tenacity she’s shown throughout this season. As for the American ladies, Bradie Tennell is in peak form and I think she will have her best worlds result to date.”

The two biggest rivalries, friendly as they are, will involve Americans. Chen and two-time Olympic gold medalist Yuzuru Hanyu of Japan stand (and leap) high above the rest of the men's field, with Zhou in solid shape for a bronze. Hubbell and Donohue figure to be tested by Madison Chock and Evan Bates, with whom they have swapped U.S. titles in recent years.

“We have been waiting for this showdown between Hanyu and Chen for quite a while now,” says Weir, who along with Lipinski and Terry Gannon will call the event from the NBC Sports studios in Connecticut, with coverage on the main network, NBCSN and the Peacock streaming service. "It's 12 months later than expected but nonetheless I expect it to be epic.

“I am excited to see Vincent compete as he tries to regain another world medal. He looked superb at nationals and is on the ascent. I wouldn’t be surprised to see a set of statement-making performances from him.”

The U.S. ice dancers should benefit from the absence of France's Gabriella Papadakis and Guillaume Cizeron, who have won four world crowns. Hubbell and Donohue edged Chock and Bates in January at nationals, reversing the finish for each couple in 2019.

“Ice dancing could see two medals for Team USA,” Lipinski says. “Madison Chock and Evan Bates have only competed once this season, where Madison Hubbell and Zach Donohue have been stellar in their events, and I think the momentum is in their favor. Both teams bring something exceptional and unique to the ice and I’m excited to see them take on the world.”

Pairs, in which the last U.S. couple to medal at worlds came in 2002, is a long shot. The new pairing of Brandon Frazier and Alexa Knierim, whose husband Chris retired after last season, has been formidable. Knierim/Frazier won nationals handily, but measuring up to the top Chinese and Russians, among others, will be a major challenge.

These pre-Olympics worlds determine the number of spots each country will have for the Beijing Games. The Americans are hoping to get the maximum three in each discipline, with both men's and ice dance very likely to achieve that.

“As difficult and daunting as this task looks,” Lipinski says, "I believe these athletes are prepared and ready to take this on. This is what athletes are best at, this is what they train for. You train for all different types of scenarios and prepare for the unexpected.

“This sport even without a pandemic is unpredictable and I don’t doubt these skaters have had a plan in place for a while now to ready themselves for this event. I know all these skaters are just so excited to have the opportunity to compete again.”