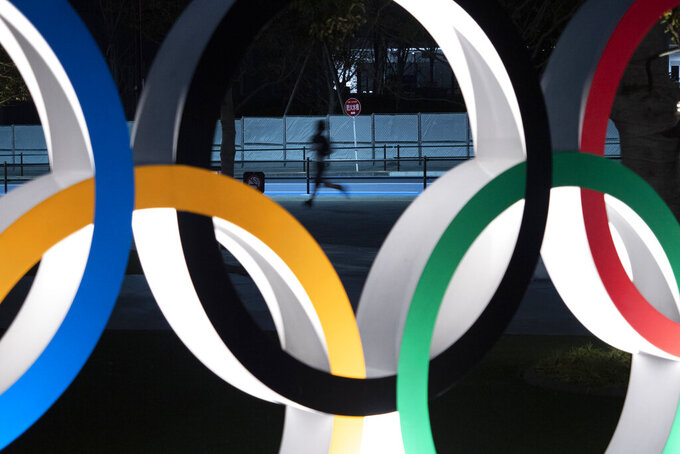 FILE - In this March 30, 2020, file photo, a man jogs past the Olympic rings in Tokyo. Tokyo Olympic CEO Toshiro Muto talked Thursday, May 21, about the need to take “countermeasures” to combat COVID-19 at next year's postponed games. (AP Photo/Jae C. Hong, File)

DENVER (AP) — The U.S. Olympic and Paralympic Committee is eliminating 51 positions and furloughing 33 more as part of a dramatic cut in staffing designed to trim up to 20% of its budget to respond to shortfalls caused by the coronavirus pandemic.

“I am overwhelmed by the magnitude of this change. It is significant,” CEO Sarah Hirshland wrote in a letter sent Thursday to Olympic stakeholders and obtained by The Associated Press.

The letter said 32 employees had been offered different roles in the organization, setting up the possibility that not all the eliminated or furloughed positions will result in a temporary or permanently lost jobs. Still, the moves, combined with more than 30 employees who previously took buyout offers, will result in a staff of about 500 being reduced by nearly one-fifth.

These are the most drastic cuts since 2009, when the federation laid off 54 employees to handle recession-related shortfalls.

Hirshland did not go for across-the-board cuts, instead choosing areas that were designed to have the least impact on athlete support. But every facet of the U.S. Olympic movement is bound to feel some pain as a result of the one-year postponement of the Tokyo Games combined with the shutdown of sports, which is devastating many of the individual sports organizations that make up the backbone of the Olympic team.

“It has become clear that it will take months, and not weeks, for us to return to full operation, particularly at our training centers in Colorado Springs and Lake Placid,” Hirshland said.

Though the Olympic Training Centers have served fewer athletes over the years, they still offer housing and training for hundreds, including those from about a dozen sports that have their full-time training facilities there.

The USOPC brought in $172 million in broadcast rights after the last Summer Olympics (2016), and stands to receive as much or more if the Tokyo Games take place next year.

Without those funds, however, the USOPC has to scramble to make it through another year. In a letter sent last month to alert the Olympic family of the upcoming cuts, Hirshland said a full cancelation of the games — a possibility not being taken off the table — “would be devastating to our athletes, first and foremost, but also to our financial health and stability.”