Vaccine a shot in the arm for Campbell's Olympic preparation 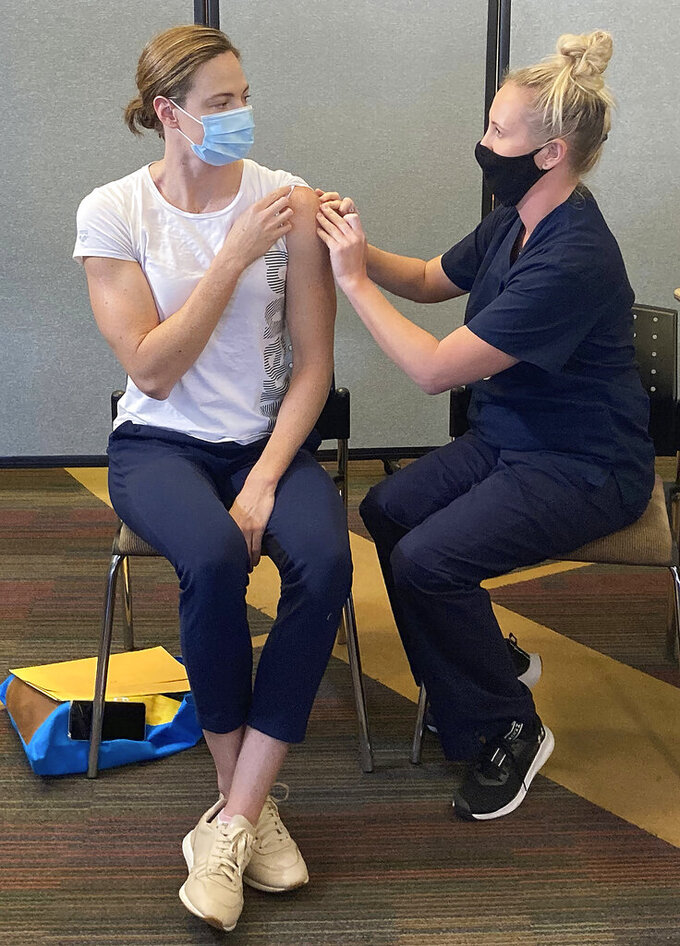 Swimmer Cate Campbell receives a Pfizer COVID-19 vaccination at the Queensland Academy of Sport in Brisbane, Australia, Monday, May 10, 2021. The Australian government announced after a special National Cabinet meeting that Olympic participants would be vaccinated under a priority group which includes health-care workers, Indigenous people aged over 55 and people older than 70. (AP Photo/John Pye)

BRISBANE, Australia (AP) — Australian swimmer Cate Campbell has had to incorporate something new into her fine-tuning as she prepares for a fourth Olympics.

The two-time Olympic gold medalist lined up Monday to get the first of her two injections of the Pfizer vaccine at the Queensland Academy of Sport in Brisbane, one of five venues where athletes queued on day one of the program.

“We’re going into a pretty unknown situation over in Tokyo so to have this little (injection ) is a huge weight off everyone’s shoulders,” Campbell said.

“Timing wise to get this jab works out perfectly,” Campbell said. “Glad we can get it far enough away from Olympic trials so that if there are any adverse side effects that we’ll be well and truly over them by the time it comes around to Olympic trials."

Australia is holding its swimming trials for the Olympics from June 12-17. The Tokyo Olympics start July 23, with the first swimming medals on offer the following day.

Campbell said Australian athletes were embracing the vaccinations as an extra precaution during the COVID-19 pandemic, which has already forced a 12-month delay to the Tokyo Olympics.

She said it will keep the Australian swimmers in line with their rivals from countries such as the United States and Britain.

“As far as I know, everyone is putting up their hand and saying ‘Yes please, and thank you, we will take that vaccine,’” she said. “The majority of our competitors (in swimming) will have had the vaccine as well, and so we want to even the playing field.”

Australia’s Olympic team for Tokyo will eventually include 450-480 athletes, but the vaccination program for eligible athletes and support staff will involve about 2,000 people.

Members of the Olympic contingent aged over 50 will receive the AstraZeneca vaccine, and those under 50 will be given the Pfizer shot.

Australia's vaccination program has been slower than initially scheduled, with priority given to health-care workers, Indigenous people aged over 55 and people older than 70.

All Australians aged over 50 will be eligible for the AstraZeneca vaccine this week.

Some critics have said healthy young athletes shouldn’t get priority over scarce vaccination stocks ahead of more vulnerable citizens.

But Australian Olympic Committee chief executive Matt Carroll said the team was being vaccinated by a private provider and “they’re not queue jumping.”

“There’s nobody who is to be vaccinated in the current cohort under the Australian system who is missing out,” Carroll said. "We’re not putting a load on the public system whatsoever.”

Athletes traveling to Japan for the Tokyo Olympics will be required to stay within a “bubble” consisting of the official accommodation, venues and training areas and will be tested for the coronavirus before and during their stay.

All travelers arriving in Australia must undertake a mandatory 14-day hotel quarantine, and there’s a backlog in applications.

Carroll said the Olympic athletes would likely undergo a bespoke quarantine on return from Tokyo — similar to that used for tennis players and officials before the Australian Open earlier this year — so that it doesn’t burden the public system.