Virus masks, apps: The race is on to avoid hidden carriers 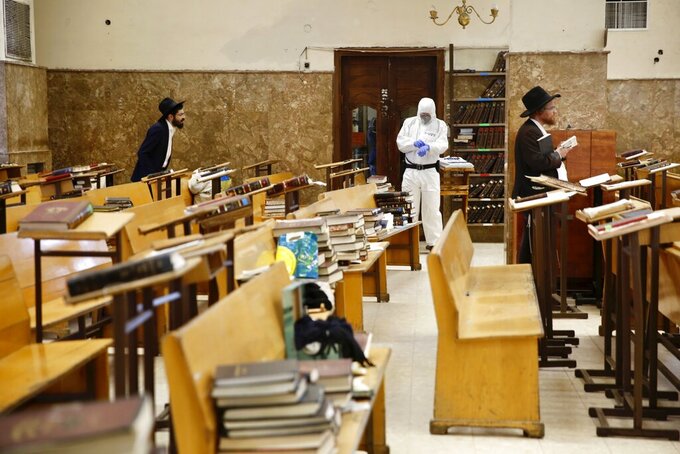 An Israeli police officer wearing protective gear waits to detain Ultra orthodox men as they pray in a synagogue in defiance of government measures to help stop the spread of the coronavirus, in Bnei Brak, a suburb of Tel Aviv, Israel, Thursday, April 2, 2020. ‏On Wednesday, Israeli Prime Minister Benjamin Netanyahu ordered a police cordon around the largely ultra-Orthodox city of Bnei Brak, to limit movement to and from the city. Bnei Brak has the second highest number of coronavirus cases in Israel. (AP Photo/Ariel Schalit)

PARIS (AP) — The worldwide race to protect people against being infected by unwitting coronavirus carriers intensified Thursday, pitting governments against each other as they buy protective gear and prompting new questions about who should wear masks, get temperature checks or even be permitted to go outside.

In the Chinese city of Wuhan, where the pandemic began in December, a green symbol on residents' smartphones dictates their movements. Green is the "health code" that says a user is symptom-free. It’s required to board a subway, check into a hotel or enter the central city of 11 million. Serious travel restrictions still exist for those who have yellow or red symbols.

In northern Italy, the country with the most virus deaths in the world at over 13,000, guards with thermometer guns decide who can enter supermarkets. In Los Angeles, the mayor has recommended that the city's 4 million people wear masks. They're mandatory for all Israelis who leave home, as well as customers of grocery stores in Austria and pharmacies in Pakistan.

A top official in France's hard-hit eastern region complained Thursday that American officials swooped in at a Chinese airport to spirit away a planeload of masks that France had ordered.

"On the tarmac, the Americans arrive, take out cash and pay three or four times more for our orders, so we really have to fight," Dr. Jean Rottner, president of the Grand Est regional council and an emergency room physician in Mulhouse, told RTL radio.

A study by researchers in Singapore on Wednesday estimated that around 10% of new infections may be sparked by people who carry the virus but have no symptoms yet or never do.

In Greece, authorities placed an entire refugee camp of 2,400 people under quarantine Thursday after discovering that a third of the 63 contacts of just one infected woman tested positive — and none had showed symptoms.

The top U.S. infectious disease official, Dr. Anthony Fauci, said medical experts are no closer to figuring out why some seemingly healthy people have only mild or no symptoms while others become catastrophically sick.

“I've been doing infectious diseases now for almost 50 years, and I can tell you I don't fully understand exactly what the mechanism of that is,” he told NBC's “Today” show.

In response to the study, the U.S. Centers for Disease Control and Prevention changed how it defined the risks of infection, saying essentially that anyone may be a carrier, whether they have symptoms or not. But neither it nor the World Health Organization changed their recommendations that not everyone need to wear a mask.

Los Angeles Mayor Eric Garcetti said even a “tucked-in bandanna” could slow the spread of the virus and remind people to keep their distance from each other.

“We’re going to have to get used to seeing each other like this,” he said, donning a mask.

In Japan, where masks are a household staple, the government planned to mail two gauze masks each to the country’s 50 million households.

Nine leading European university hospitals warned Thursday they will run out of essential medicines for COVID-19 patients in intensive care in less than two weeks. The European University Hospital Alliance said countries should cooperate, not compete and refuse to export drugs elsewhere, to ensure a steady supply of these drugs for critically ill virus patients.

They wrote that existing stocks of muscle relaxants, sedatives and painkillers were likely to run out in two days in the hardest-hit hospitals, and in two weeks in others. The group represented hospitals in Austria, Britain, France, Germany, Italy, the Netherlands, Belgium, Sweden and Spain.

In the United States, from New York to Los Angeles, officials also warned that the worst is still ahead.

“How does it end?" New York Gov. Andrew Cuomo said. "The answer is nobody knows for sure.”

New York state's coronavirus death toll doubled in 72 hours to more than 1,900. Cuomo has already complained that U.S. states are competing against each other for protective gear and breathing machines, or being outbid by the federal government.

President Donald Trump acknowledged that the federal stockpile is nearly depleted of the personal protective equipment needed to protect doctors and nurses on the front lines of the coronavirus fight. The Pentagon said Thursday that the Federal Emergency Management Agency had asked it to help by sending 100,000 body bags.

Altogether, more than 956,000 people around the world have contracted the virus, according to Johns Hopkins University. More than 48,000 have died from the virus and another 202,000 have recovered.

The real figures are believed to be much higher because of testing shortages, differences in counting the dead and mild cases that have gone unreported. The virus, which is spread by tiny droplets from sneezes or coughs. causes mild or moderate symptoms in most people but can cause severe illness and death for the elderly or the ill.

Many governments are modeling their response to the virus after China, which in January closed off an entire province of over 70 million. People in Wuhan, once the epicenter of the crisis, are starting to return to work, tracked by a smartphone app.

Walking into a subway station, Wu Shenghong, used her phone to scan a barcode on a poster that triggered her app. A green code and part of her identity card number appeared on the screen and a guard wearing a mask and goggles waved her through.

A red code could have told the guard that Wu was infected or had symptoms and was awaiting a diagnosis. A yellow code means she had contact with an infected person but hadn’t finished a two-week quarantine.

People with red or yellow codes “are definitely not running around outside,” said Wu, 51. “I feel safe.”

Associated Press writers around the world contributed to this report.