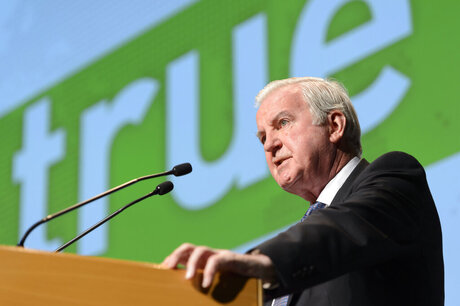 LAUSANNE, Switzerland (AP) — The World Anti-Doping Agency is prepared to open new inquiries into suspected systematic doping in Russian sports and other countries.

Four months after a WADA-commissioned investigation alleged a Russian doping conspiracy in track and field, WADA president Craig Reedie said Monday he would "reanalyze" the report to see if new cases were needed.

"I will determine whether or not there is sufficient information to propose further investigations," Reedie told a conference of anti-doping officials from across the world.

Reedie reacted to criticism from the WADA athletes' commission last week, which said comments in the "incriminating" report justified investigating other sports in Russia, and track and field programs in several other countries.

The promise helped keep Russia as the focus of doping issues one week after Maria Sharapova announced her positive test for meldonium. The blood-flow enhancing medication has triggered at least 99 positive cases, many from former Soviet Union countries, since being put on WADA's list of banned substances on Jan. 1.

Under pressure from Russia to justify the science behind its decision, WADA director general David Howman defended the agency's working methods established for more than a decade.

"We are not going to start creating a new process because of one substance," Howman said on the sidelines of the conference. "There are provisions that say, if (a substance) is on the list, there is no query as to why it is on the list."

Five months before the Olympics in Rio de Janeiro, Russia's track and field team remains barred from competition as a result of the WADA-commissioned inquiry. The IAAF plans to make a final decision in May on whether Russia should be allowed back in for the games.

By then, other Olympic sports in Russia could be under closer scrutiny.

Reedie said Monday that he spoke with WADA athletes' spokeswoman Beckie Scott and promised to "re-engage" with the inquiry team led by Dick Pound, plus sports federations and anti-doping officials.

Scott had suggested in an open letter that WADA's response to the Pound report in November was unsatisfactory.

"There are quite a number of mentions of other sports," Howman acknowledged. "We know they collected a lot of information and we need to ask them whether any of it was substantial enough" to open an inquiry.

Finding money for more lengthy investigations could be a factor.

Reedie noted that the Pound investigation had cost $1.5 million, and WADA had an annual operating budget of $26 million. He said he could propose new inquiries, and paying for them, with the WADA executive board. It next meets on May 11 in Montreal.

"We must pick our battles wisely based on hard evidence," Reedie said.

The Sharapova case was not discussed in detail at the opening sessions of a three-day meeting of national anti-doping agencies, so as not to prejudice her ongoing disciplinary case by tennis authorities and possible appeals, Howman said.

Still, he appeared to dismiss one line of Sharapova's defense that she and her entourage were unaware of warnings that meldonium, which she said she had used since 2006, was about to be prohibited for use without a medical exemption.

Asked about reports in Russia quoting sports minister Vitaly Mutko's request to WADA to provide its scientific evidence relating to meldonium, Howman said no special favors would be given.

"We will show them the minutes of the meeting which are public, and the way in which these things were discussed," he said.

— Howman said of collecting athletes' samples in Russia, now overseen by the British anti-doping agency: "I can't stand here and say it is brilliant yet. But it has started."

— Samples taken at the 2014 Sochi Olympics and passed clean should be re-tested by the IOC long before a 10-year statute of limitations expires, Howman said. "Some ought to be tested now rather than wait because of the information we know now."

— Defending the International Tennis Federation's anti-doping program, which even some players criticize for not testing them enough, Howman said national anti-doping agencies could conduct more tests, but some "don't think it is a high risk sport and that is a pity."