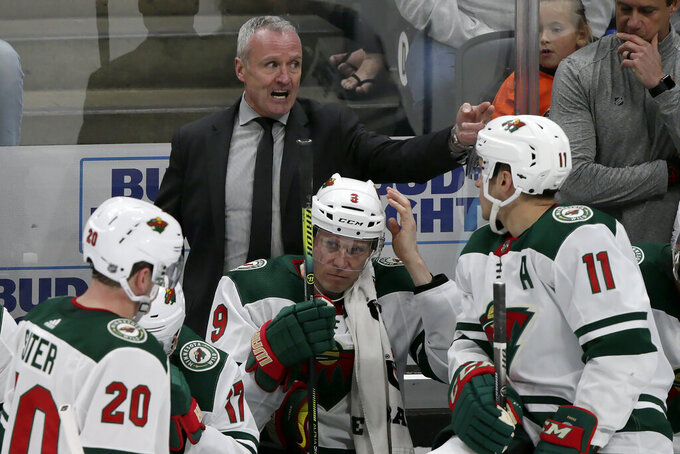 FILE - In this Sunday, March 8, 2020, file photo, Minnesota Wild interim head coach Dean Evason, above center, directs players behind the bench during the overtime period of an NHL hockey game against the Anaheim Ducks in Anaheim, Calif. The Minnesota Wild made Dean Evason their full-time head coach on Monday, July 13, 2020, signing him to a two-year contract extension at the commencement of training camp for the restarted NHL season.(AP Photo/Alex Gallardo, File)

Evason, who signed a two-year contract extension through the 2021-22 season, took the ice on Monday for the first full-team practice since the virus outbreak forced the NHL to shut down March 12. The 55-year-old Evason was made interim coach on Feb. 14, when Bruce Boudreau was fired by general manager Bill Guerin.

The Wild went 8-4 under Evason, which ultimately secured them a spot in the 24-team tournament that will frame these most unusual Stanley Cup playoffs.

“We need to slide right back into where we were, because we thought we did gain some really good ground in that area and were playing extremely well as a team,” Evason said. “We were close. We were tight. And the guys in the practice today seemed like we hadn’t even left. So they had fun. But they work their butts off. And we really enjoyed our first day.”

Minnesota will play Vancouver in the qualifying round, a best-of-five series that begins on Aug. 2. The games will be played in Edmonton, where Evason and the Wild will travel in two weeks to enter the bubble. Guerin decided about a month ago, he said, that he wanted Evason to direct the team the rest of the summer without having to worry about an extended audition.

“All along I’d planned on doing a full search. I was upfront and honest with Dean about that right from the start, but as we kind of went along, and the team played really well under Dean, and then when the pause in the season started, I could see Dean’s communication with the players and how good it was, how the players responded to him and the work that he was putting in,” Guerin said. “As I was discussing with my hockey ops group, this is the type of guy that we’re looking for. And if he’s right under our nose right now, I didn’t really feel like I needed to go any further.”

Evason joined the Wild two years ago as an assistant, after six seasons as head coach for Milwaukee in the AHL. He was an assistant in the NHL for the Washington Capitals for seven seasons prior to that and also has extensive head coach experience at the junior level in Canada.

Evason had 139 goals, 233 assists and 1,002 penalty minutes in 803 career NHL games from 1983-96 with five different teams, mostly with the Hartford Whalers. He also played for the Capitals, San Jose Sharks, Dallas Stars and Calgary Flames.

“He’s a great communicator and a great coach. He knows the game as well,” said Wild right wing Kevin Fiala, who played three seasons for Evason in the AHL. “I’ve had some tough fights with him, small fights, but in the end, I’m very happy that he showed me the way, off the ice mostly and on the ice as well.”

Now Evason will have the chance to guide Kaprizov, too. The 23-year-old won't be able to take part in the playoffs, but he can get a head start for next season now by immersing himself in the culture of his new country, state and team. The Wild must burn the first year of Kaprizov's two-year entry-level contract, but his potential made this move worth it.

Kaprizov, a 2015 fifth-round draft choice by the Wild, has 113 goals and 117 assists in 293 career regular season Kontinental Hockey League games, including 33 goals and 29 assists in 57 games for CSKA Moscow last season. The 5-foot-9, 185-pound left wing was the youngest player on Russia's roster at the 2018 Winter Olympics, netting the winning goal in overtime of the gold medal game against Germany.

“It feels really good to get this done," Guerin said. "We’re excited to have Kirill in the mix."