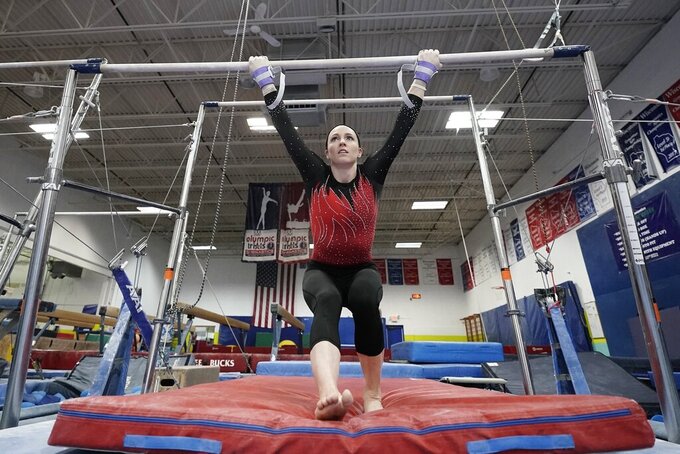 FILE - In this Feb. 18, 2021, file photo, gymnist Chellsie Memmel trains in New Berlin, Wis. The 32-year-old Memmel, a former world champion and Olympic silver medalist, will compete for the first time in nine years on Saturday at the US Classic in Indianapolis. (AP Photo/Morry Gash, File)

Morgan Hurd can feel when the pressure creeps up on her.

The pressure — the kind that comes with the territory when you have the title “world champion” on your resume — isn't just external. It's internal.

She has been one of the best gymnasts on the planet for years. The only thing the 19-year-old Hurd hasn't done is make an Olympic team, a byproduct of the calendar more than anything else. Her first year competing as a senior came in 2017 when she practically willed herself to a world all-around title in Montreal.

Having a shot at the 2020 Olympics was always part of the plan. Hurd seemed to be on her way last March when she won the American Cup in what was supposed to be the first major step toward the 2020 Tokyo Games following an occasionally difficult 2019 competition season.

Then the COVID-19 pandemic hit. The Olympics were pushed back 12 months. And all the momentum vanished.

In that way, things have been no different for Hurd than for most of the other women hoping to make the U.S. team when it heads to Japan in July.

In one very real way, however, there is a significant difference.

Only Hurd, Simone Biles and Chellsie Memmel will take the floor at the US Classic in Indianapolis on Saturday with a world all-around medal (or in Biles' case, five of them) stashed away somewhere. Of those three, Hurd is the only one without an Olympic medal.

For Biles, the next two months could very well serve as a victory lap of sorts. For the 32-year-old Memmel — the 2005 world champion and a member of the silver-medal-winning 2008 U.S. Olympic team — this weekend is simply the next surprising step in an improbable comeback.

For Hurd, who lives and trains in Delaware, this is her first and possibly only opportunity to make the Games. And she knows it. And she knows others do too.

“I really have expectations for myself and I know everyone else has too because of what I’ve done in the past,” Hurd said Friday. “But at the same time, I really have to remind myself and constantly tell myself this, ‘That that was how many years ago?’”

Almost four, which can be a lifetime at the sport's elite level. The miles — and the injuries (three surgeries on her right elbow alone) — have added up.

“I was a fresh senior (in 2017),” Hurd said. “You know, my body was holding up better. I had been an athlete a lot less time. So I just have to keep reminding myself that where I am now, I’m doing the best that I can do now.”

Hurd plans to use the meet as a foundation she hopes she can build on heading into a busy stretch that includes the U.S. Championships in two weeks and the Olympic Trials at the end of June. She won't compete on uneven bars this weekend and her routines on other events will be watered down with an eye toward upping the difficulty in time for Trials.

“My gymnastics may not be up to par as much as I would like, but I honestly have never felt better,” Hurd said. “Just being out there is really boosted my whole morale and gave me a lot of confidence already."

Regardless of what happens over the next five weeks, Hurd finds herself — and the world — in a different place than when she stood atop the podium at Olympic Stadium in Montreal.

Hurd, born in China before being adopted and brought to the U.S., has become an increasingly vocal supporter of social justice initiatives. She spoke at a “Stop Asian Hate” rally in New York last month. On Friday she wore a T-shirt with “Stop Asian Hate” on one sleeve and “BLM” (Black Lives Matter) on the other. She credited her more public advocacy to the bravery of fellow gymnasts who came forward to detail the abuse they suffered during their careers.

“(They) paved the way and opened up the floor to be able to use my voice," Hurd said. "And I just really thought to myself, too, that all of these things are so much bigger than gymnastics and if gymnastics disappeared tomorrow, these problems would still be there. And I’m a person first and a gymnast second.”

It's a mentality echoed by Memmel, who retired in the fall of 2012 and had no real plans on returning until the COVID-19 shutdown last spring gave her copious amounts of time on her hands. What started with a simple foray into “adult gymnastics” evolved into something far more serious. There were nerves on Friday when she walked into the arena to practice on the same floor with young women half her age.

She admitted the jitters were “silly” because ultimately she knows she's playing with house money.

“I think that’s the cool part this time around, that gymnastics is a huge part of my life, but it’s not the only part of my life,” said Memmel, who will compete in two events on Saturday but hopes to expand to all four if she successfully petitions her way into the U.S. Championships. “So if I don’t do well, I’m still a wife and I still have two amazing kids and an amazing family and just this incredible, incredible support system that, you know, has just meant so much to me. So, you know, either way it goes ... I still win.”