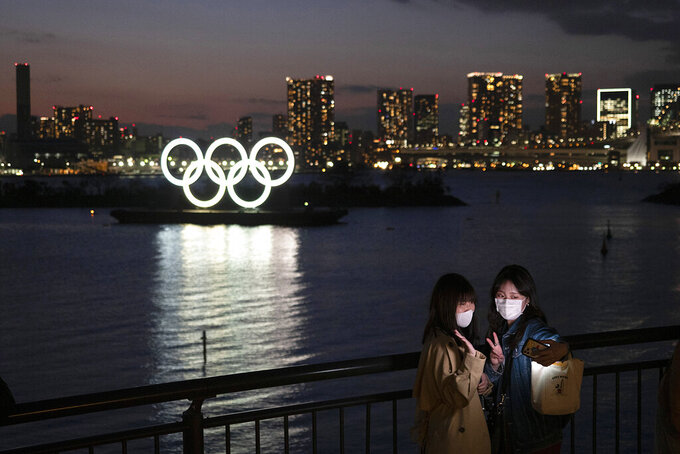 Two women take a selfie with the Olympic rings in the background in the Odaiba section of Tokyo, Thursday, March 12, 2020. Doping testers around the sporting world are trying to avoid infecting themselves or athletes during the global virus outbreak, and that's not easy when collecting samples means getting very close to sports stars. (AP Photo/Jae C. Hong)

A worldwide group representing Olympic hopefuls is calling on the IOC to postpone the Tokyo Olympics until the coronavirus pandemic is under control — a decision the IOC says could be as much as four weeks away.

“As the world unites to limit the spread of COVID-19 virus, the IOC ... must do the same,” Global Athlete said in a news release Sunday.

The statement came out a few hours before an IOC announcement that said the committee was considering several scenarios and would finalize a decision within four weeks. The games are scheduled to start July 24.

The group's director general, Rob Koehler, reacted to that news, saying it was “unacceptable, irresponsible, and once again ignores athletes' rights.”

He was echoing what some athletes in the group are saying, along with others who have spoken up on social media and elsewhere.

“It's bizarre the IOC hasn't shown any real leadership,” said Caradh O'Donovan, a Global Athlete founder from Ireland whose karate training has been put on hold due to restrictions in her country. “They're acting as though it's business as usual and it just seems very strange.”

O'Donovan said the unevenness around the globe regarding training, doping control and qualifying standards are among her key concerns.

“Without a clear answer, athletes are being indirectly asked to train,” Koehler said. “If anyone knows how competitive athletes work, they will stop at nothing to achieve their goals. We understand it's a difficult decision but the IOC has a duty of care toward athletes which they have not exercised.”

The group also called on broadcasters, specifically NBC, and sponsors to support the IOC and International Paralympic Committee "with flexibility and understanding during these uncharted times.”

Also on Sunday, the leader of World Athletics, Seb Coe, called for a postponement of the games.

“Nobody wants to see the Olympic Games postponed but ... we cannot hold the event at all costs, certainly not at the cost of athlete safety,” Coe said.

It's a thought being echoed by the Global Athlete group.

“My dream is to go to the Olympics this year but it's an impossible task from my perspective and it's the same for a huge number of athletes,” O'Donovan said. “I'd be absolutely stunned if they go on in July, as planned.”