Zatopkova, Olympic champion and wife of Zatopek, dies at 97 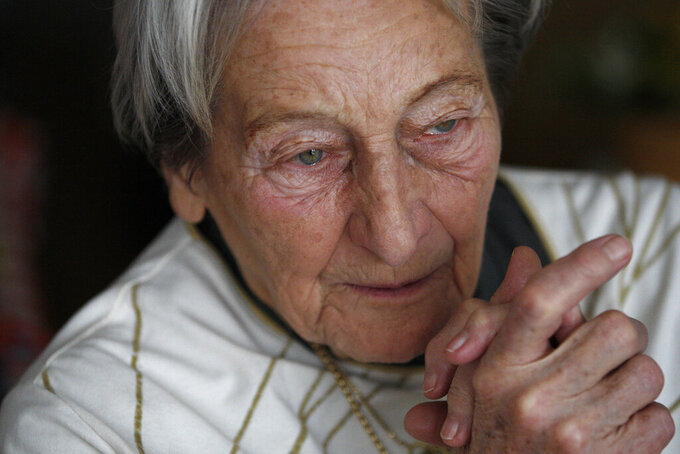 PRAGUE (AP) — Dana Zatopkova, an Olympic javelin champion and the wife of running great Emil Zatopek, has died. She was 97.

The Czech Olympic Committee said Zatopkova died Friday at Prague’s military hospital. No details about the cause of death were immediately given.

Zatopkova was born on the same day as her husband, and they formed one of the best known sports couples in the world.

The two fell in love before the 1948 London Games, and Zatopek didn't wait long to propose, Zatopkova told The Associated Press in a 2012 interview ahead of the London Olympics.

"We climbed a lime tree to pick the lime blossom for my mom when Topek said: `Listen, I think that it could be quite fine for us to get married,'" she said. "It was a happy time for us, the early stages of our love, everything looked great and also Emil was successful."

Nicknamed "the Czech Locomotive" or "the Engine," Zatopek used his exceptional speed to win the 10,000 meters at Wembley Stadium for his first Olympic gold medal. He then won the silver medal in the 5,000.

The disappointment of finishing seventh in London in the javelin spurred Zatopkova to quit handball and concentrate on track and field.

"The decisive moment for me came at the London Olympics," she said. "I was a girl from the country and didn't know much about the games. But when I was there, saw how big it was, the opening ceremony, and felt the mystique and everything that was involved, I was really impressed and said to myself: `From now on, I'll devote my life to athletics and will do all I can to make my presence felt at the next Olympics.'"

And that's when she found her greatest success. At the 1952 Helsinki Games, Zatopkova won the javelin with an Olympic record throw of 50.47 meters only minutes after Zatopek had won the 5,000 meters.

Zatopek went on to retain his title in the 10,000 and win the marathon in his first attempt at the distance, making history as the only man to win all three races at the Olympics.

"I was surprised when I first saw how Topek lived for it, what he was ready to sacrifice," Zatopkova said. "But when I saw his successes, I realized: `Yes, that's it.'"

Zatopkova later set a world record in the javelin in 1958 with throw of 55.73 meters and won the silver medal at the 1960 Rome Olympics before she retired and continued as a coach. Between 1960-72, she served on the IAAF women's committee, working to promote women's causes in athletics.

"Today, women compete in the pole vault, hammer throw or marathon, something which was a taboo for them in the past," she said.

In 1988, Zatopkova was awarded the Olympic Order and an honorary diploma by the International Commission for Fair Play while her husband became the first Czech athlete to be awarded the U.N.'s Pierre de Coubertin Prize for promoting Fair Play.

“We had beautiful years together with Emil,” she once said. “We had a lot of fun together."

Jiri Kejval, the head of the Czech Olympic Committee, said Zatopkova was a role model for generations of Olympians.

“Dana was an excellent athlete," Kejval said, “but also a great person.”