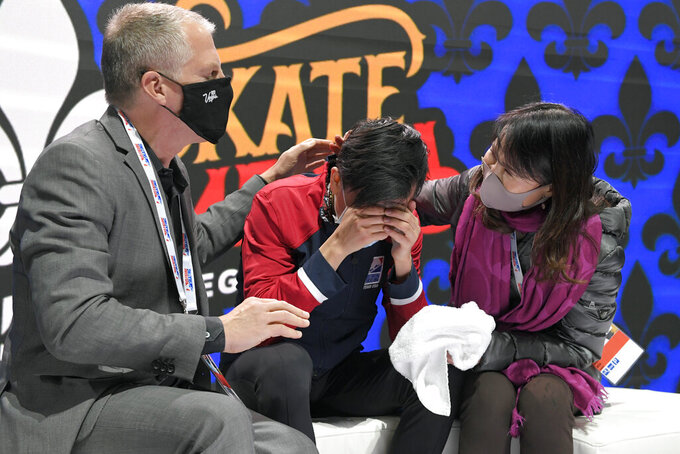 Until Saturday night, the 22-year-old Chen had won every competition he entered since March 2018. That streak ended at 14.

With two of his lowest-scoring performances of the Olympic quadrennial, Chen took the bronze medal at the Orleans Arena with a 269.37 total.

“I definitely think there needs to be more reflection,” Chen said of his skates. “I don’t have a perfect answer right away. That’s definitely something that’ll be a priority for me.”

Zhou, the 2019 world bronze medalist, won with 295.56 points for the first Grand Prix victory of his career.

Zhou’s win is what he has long been searching for — likely since winning the junior world title in 2017 — but especially since the 2021 World Championships in March, when he performed a short program so poorly that he was 25th and failed to qualify for the free skate.

“I don’t think it’s sunk in yet,” Zhou said of his inaugural Grand Prix win. “I didn’t really expect this result, but what I did expect of myself was to be as well prepared and well trained as I possibly could, and I think focusing on that every single day at home led to making the seemingly impossible seem possible. I hope that’s a recurring theme this season.”

Three Russian teenagers are chasing Skate America medals and have a hold on the podium following the women’s short program.

Alexandra Trusova, the reigning world championship bronze medalist and pre-competition favorite, was on top with 77.69 points for her “Frida” program.

“I skated clean, but I did not do my triple axel, so hopefully I can do it next time,” Trusova said.

The 17-year-old is dealing with a foot injury, but she still opted to compete and put out a program that included an opening double axel and three triple jumps.

“There was a decision between not skating and competing, but this morning I woke up and felt like I could try it,” she added.

“I’m especially pleased that I was able to open up and skate with emotions,” Usacheva commented.

A handful of athletes are capable of catching the Russians, led by Japan’s Kaori Sakamoto who’s in fourth with 71.16 points.

Amber Glenn, the reigning U.S. silver medalist, is the top American in seventh with 67.57 points.

Bradie Tennell, the 2021 U.S. champion, withdrew from Skate America last week due to a foot injury.

The Russian team of Evgenia Tarasova and Vladimir Morozov won the pairs competition with a two-program score of 222.5 points. It marks their first Grand Prix victory in three seasons; they were fourth at worlds last season.

“Today was a long and hard day,” Morozov said. “It wasn’t perfect, but it was a good step forward.”

Japan’s Riku Miura and Ryuichi Kihara were second (208.2) for their first career Grand Prix medal and the first Skate America medal by a Japanese pairs’ team, while 2021 world bronze medalists Aleksandra Boikova and Dmitrii Kozlovskii of Russia slipped from second to third (205.53) with mistakes in their free skate.

Americans Alexa Knierim and Brandon Frazier rose from fifth to fourth with the second-best free skate of the night. Only they and the winning Russian team completed their free skates with zero falls.

The 2018 Olympians are on their way to a fourth Skate America win in a row, although just 1.03 points separates them from training mates and longtime competitors Madison Chock and Evan Bates.

Laurence Fournier Beaudry and Nikolaj Sorenson, who skate for Canada, were third —- seven points back with a 75.33 for their George Michael medley.

“The thing that sticks out in my mind from this performance was really being aware while it was happening of how the crowd was reacting,” Hubbell said, after going nearly all of last season with no crowds due to the pandemic. “I would say this wasn’t the most applause we’ve gotten ever, but it felt like it. It was very welcome after a year of mostly silence.”