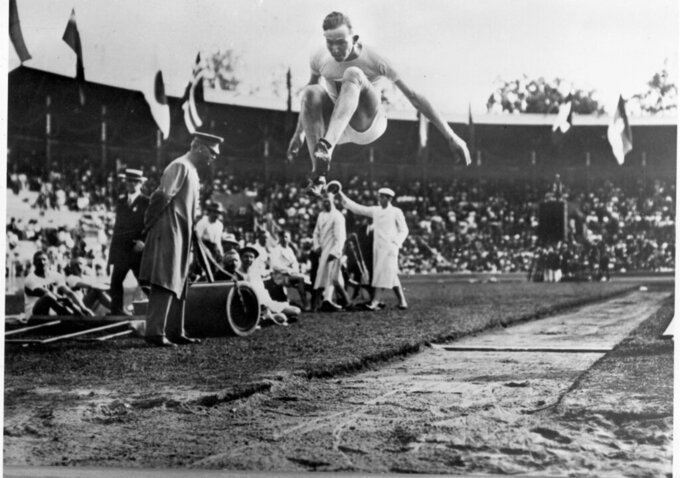 FILE - In this 1912 file photo, Albert Gutterson, of the United States, competes in the long jump at the 1912 Olympic Games in Stockholm. Gutterson went on to win the gold. (Pressens Bild/TT via AP)

STOCKHOLM, Sweden (AP) — Hannes Kolehmainen was the first of the “Flying Finns.” Duke Kahanamoku was the father of modern surfing. Jim Thorpe was the modest, uncomplicated Native American who might be the greatest athlete ever.

All three were sporting trailblazers in their own right, and all three gained world-wide attention because of their gold-medal performances at the 1912 Olympics in Stockholm.

The fifth Summer Games — and the last for eight years because of World War I — was marked by controversy, tragedy and the first use of technology.

It was the most global Olympics so far, too, with athletes from five continents taking part after Japan became the first Asian country to compete.

There was no denying the stand-out performers.

Kolehmainen won three gold medals in athletics: in the 5,000 meters, where he broke the world record by nearly 25 seconds; the 10,000 meters; and the soon-to-be-defunct 12,000-meter cross-country event. He also won a silver medal in the cross-country team event.

The success of “Smiling Hannes” ushered in an era of Finnish dominance in long-distance track, through runners like Paavo Nurmi and Ville Ritola, and then into the 1970s with Lasse Viren.

Thorpe won gold medals in the multi-event pentathlon and decathlon, and placed fourth in the high jump and seventh in the long jump. It underlined the all-around ability of an American of Indian and Irish ancestry from Oklahoma who later played professional football and baseball and was named The Associated Press’ Athlete of the Half Century in a 1950 poll.

However, Thorpe had his medals stripped because it was discovered he had played baseball for a resort team in 1909 and '10, an infringement of the strict rules of amateurism on which the Olympic Games were run.

The IOC restored his medals in 1982, 29 years after Thorpe’s death, following a campaign by his family and supporters.

Kahanamoku, born in Hawaii, is most famous for popularizing surfing but he also competed at four Olympics in swimming, the first coming in Stockholm where he won gold in the 100 freestyle and silver in the 4x200 relay.

Other notable events at the games:

Francisco Lazzaro, a 21-year-old Portuguese runner, collapsed after 19 miles of the men’s marathon because of heat exhaustion and heart trouble and died the following day. He was the first competitor to die during an Olympics.

Electronic timing was used for the first time at a games that has since been described by the Olympic movement as a “model of efficiency.” Organizers introduced the first us of automatic timing devices for track events, a photo finish and public address system.

There were some remarkable feats of endurance, not least on the wrestling mat. Martin Klein of Russia and Alfred Asikainen of Finland competed for 11 hours, 40 minutes in their middleweight bout for the silver medal in Greco-Roman wrestling. Judges also stopped the light heavyweight final because the bout reached nine hours, with the two wrestlers awarded silver medals. The course for the cycling race at the games was 199 miles (320 kilometers), which is the longest race of any kind in Olympic history.

A famous name came in fifth in the first-ever modern pentathlon at an Olympics: Lieutenant George S. Patton. He later became a charismatic general in World War II, leading an armored drive across France and into Nazi Germany after the invasion of Normandy. He died following an automobile accident in 1945.

Boxing has been contested at every Olympics since 1904 — except in the 1912 edition. That was because the sport was banned at the time under Swedish law.