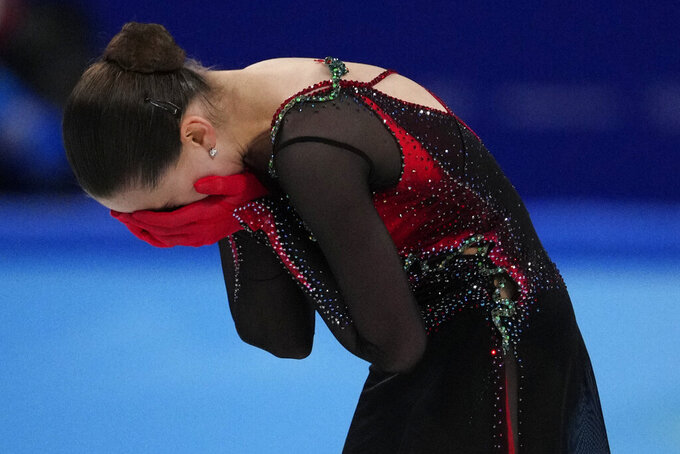 Kamila Valieva, of the Russian Olympic Committee, reacts after the women's free skate program during the figure skating competition at the 2022 Winter Olympics, Thursday, Feb. 17, 2022, in Beijing. (AP Photo/Bernat Armangue)

BEIJING (AP) — IOC President Thomas Bach joined the global bandwagon of support for Russian figure skater Kamila Valieva on Friday, criticizing her entourage and questioning whether 15-year-old athletes should be put under such pressure at the Olympics.

Valieva's emotional breakdown after a mistake-strewn skate and unforgiving questioning by her coach made millions of viewers cringe, especially after a week-long drama over her positive drug test. Bach said he felt the same way, spending much of his news conference taking rare swipes at Russia.

“I was very, very disturbed yesterday when I watched the competition on TV,” Bach said at an Olympics that began with Vladimir Putin sitting in the VIP section at the opening ceremony despite a Russian troop buildup near the Ukraine border.

Bach had direct criticism of Valieva’s entourage, saying they showed “a tremendous coldness, it was chilling to see this.”

The IOC leader did not mention Eteri Tutberidze, though he clearly targeted the preeminent coach of Russia's dominant women's figure skating program.

Bach's words got him into a testy exchange with a Russian reporter. Later, Kremlin spokesman Dmitry Peskov said Bach "does not like the toughness of our coaches, but everyone knows that in elite sports, the coach’s toughness is key to the students’ victories.”

The endless Olympic story of unethical behavior by Russian sports officials is casting a shadow over a fifth straight Games in Bach’s nine years as president. Many critics of the IOC say Valieva's doping scandal is a direct result of Russia flouting the rules for decades without real punishment from the IOC.

Olympic sports have lived through a decade of Russian doping and cover-ups after the home team was caught cheating at the 2014 Sochi Olympics, a personal project of Putin. Through much of that time, the IOC and Bach made excuses for lighter punishments than expected.

Even in Beijing, Russia is technically banned from its third straight Games, but hundreds of Russian athletes are competing in their traditional colors with “Russian Olympic Committee” uniforms and flags. And they are winning medals — more than any country other than Norway.

The Bach-led IOC has consistently tried to keep Russia in the Games, citing the need to let a new generation of "clean athletes” compete as one reason not to ban Russia outright.

“This lack of leadership perpetuates athletes abuse and exposes the lack of oversight,” Rob Koehler of the Global Athlete activist group said Friday.

Trusova and Valieva sobbed as the scores were read, Trusova talked about retiring at 17 and viewers around the world questioned how youngsters could be put under such pressure.

Athlete mental health and safeguarding young women in sports are key responsibilities for sports bodies, and Bach had to react.

His attack on the entourage did not address the larger culture that has helped Tutberidze flourish, even as her athletes retire in their teens and suffer serious injuries. She is the International Skating Union's coach of the year and the most powerful figure in Russian skating.

Bach also lamented the ruling in Beijing that let Valieva skate, pending the full doping investigation. Over the years, Bach has defended decisions and rulings that allowed Russian athletes continue to compete.

“The IOC always points blame at everyone else and never accepts accountability,” Koehler said.

Perhaps the most striking response to Valieva’s plight came from Bach’s home country of Germany. Katarina Witt, the last woman to win figure skating gold at two different Olympics, was tearful as she commentated on the event.

“It is so irresponsible what was done here,” said Witt, who grew up as a skating phenom in authoritarian East Germany before winning Olympic gold in 1984 and '88. “The whole world was watching and then she broke. She is 15. She’s a child.”

“There was a political pressure placed on her. I wish someone like her mother or someone responsible would have taken her out of there,” Witt said.

A regular criticism of the IOC under Bach is that it has been indulgent of Russia and too close to Putin, who is set to join Olympic sports bodies in May for part of a week-long conference in Ekaterinburg.

Did Bach, he asked, feel partly responsible for “media chaos” around Valieva that included “hate speeches ... bullying of a 15-year-old ... political propaganda?”

An untypically confrontational Bach replied with “the ones who have administered this drug in her body, these are the ones who are guilty.”

Bach generally withholds comments from ongoing investigations. On Friday, he directly contradicted Valieva's lawyers' arguments that the sample was accidentally contaminated by her grandfather’s heart medication.

Russian anti-doping officials are responsible for the doping case, but IOC and World Anti-Doping Agency officials have said they will also investigate. Whatever the findings, expect appeals and counter investigations that stretch out for months.