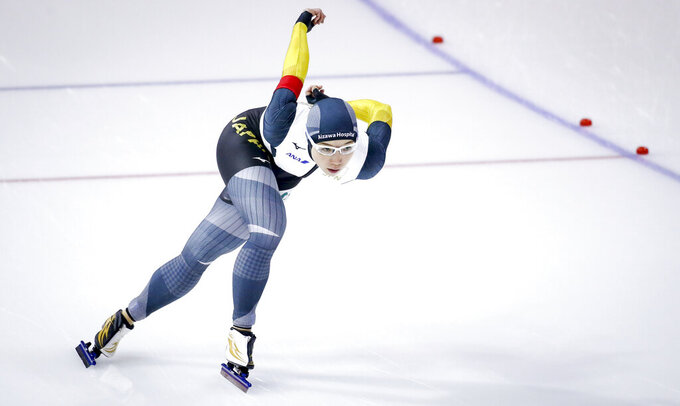 CALGARY, Alberta (AP) — Joey Mantia of the United States won the men’s 1,500 meters at the World Cup speedskating meet in Calgary for the second straight week.

Mantia finished first in 1 minute, 41.86 seconds — a half-second off the track record — on Saturday at the Calgary Olympic Oval. The 35-year-old American won the 1,500 last weekend on home ice in Salt Lake City.

“I had a big weekend last weekend and I thought I would be ready again this week, but I’m not," Mantia said. “I was questioning whether or not I’d be able to do anything this weekend. So it’s nice to know that even not prepared, or not what I think I should be to win, I’m able to hit the podium.”

Angelina Golikova of Russia earned first World Cup victory of the season in the women's 500, winning in 36.66 seconds.

“There’s a lot of things to learn from this and then I'm ready to take a little break, regroup and come back strong,” Jackson said.

“That was one of my best finishes I’ve had," she said.

Bart Hoolwerf of the Netherlands won the men's mass start in 7:38.88, securing a second Olympic berth for the Dutch in the event. Bart Swings of Belgium took silver and Felix Rijhnenger of Germany earned bronze.