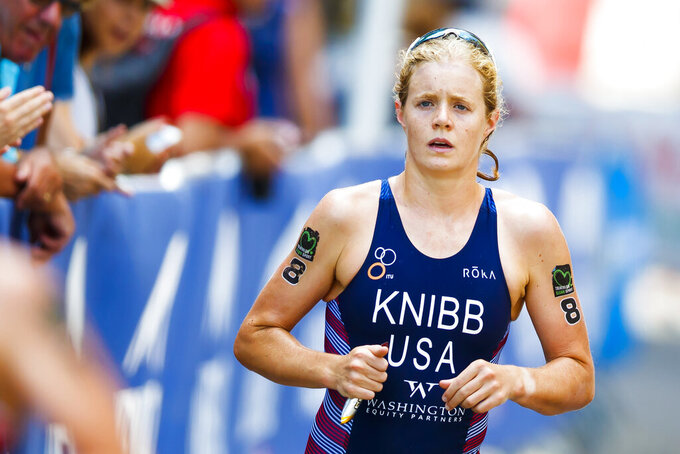 FILE - In this Aug. 18, 2018, file photo, Taylor Knibb from the U.S.A. runs to take second place at the ITU Elite Women World Cup triathlon event in Lausanne, Switzerland. Knibb won the season-opening World Championship Series triathlon to book her place on the U.S. team for the Tokyo Olympics in July. (Valentin Flauraud/Keystone via AP, File)

It was quite a day for American women at the season-opening World Triathlon Championship Series race outside Tokyo, one that bodes well for them at the Olympics in less than two months.

Taylor Knibb won the Yokohama Triathlon to book her place on the U.S. team for the Tokyo Games in July, albeit on a different course than the one used Saturday. The 23-year-old Knibb finished the Olympic distance of a 1.5-kilometer swim, 40-kilometer cycle and 10-kilometer run in 1 hour, 54 minutes, 27 seconds.

Summer Rappaport, who had already qualified for the Tokyo Games, was second, while Taylor Spivey finished fourth. Maya Kingma of the Netherlands was third, preventing an all-American podium.

“I wasn’t really thinking about Tokyo, I just wanted to get to that finish line,” Knibb said in comments posted on the World Triathlon website. “Maya was so good on the technical sections of the bike so I just wanted to pay attention to that and push on the sections where the group was slower. I was just like ‘I gotta run’, knew I just needed second and there wasn’t a lot of time for thinking!”

Rappaport said she was happy to be part of an “American one-two."

“I was focussed on catching Taylor and Maya after only racing twice since the pandemic, and today I felt I’d found my competitive edge again," she said.

Kingma said Knibb surprised her during the cycling leg.

“I was prepared to give it everything on the swim and first lap of the bike and hope there was a small group,” Kingma said. “Taylor (Knibb) escaped before I was planning to and she was so strong on the straights, and we pulled away. I was just trying to keep her wheel and I saw the gap growing."

An American also reached the podium in the later men's event. Kristian Blummenfelt of Norway won in a time of 1:42:55, Belgium's Jelle Geens was second in 1:43:05 00 and American Morgan Pearson was seven seconds behind Geens in third.

The Tokyo Olympics course will be at Odaiba Marine Park in Tokyo Bay. The men’s race is scheduled for July 26, the women’s event a day later and a new mixed relay on July 31, all of them early-morning starts to take into account expected high temperatures and oppressive humidity in Tokyo.