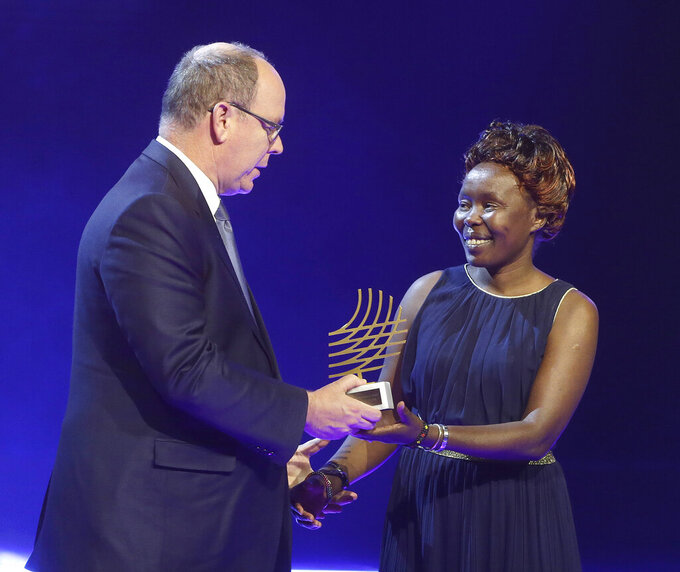 FILE - In this Friday, Dec. 2, 2016 file photo Prince Albert II of Monaco, left, presents Kenyan distance runner Tegla Loroupe with the 2016 President Award at the 2016 World Athletics Gala Awards in Monaco. Laroupe, currently the chief of mission for the IOC's Refugee Olympic Team, has tested positive for COVID-19, two people with knowledge of her condition have told The Associated Press. (AP Photo/Claude Paris)

TOKYO (AP) — Former distance runner Tegla Loroupe, the chief of mission for the IOC's Refugee Olympic Team, has tested positive for COVID-19, two people with knowledge of her condition have told The Associated Press.

Loroupe tested positive before the team was to depart its Doha, Qatar, training base for Tokyo. The team has delayed its arrival in Tokyo where the Olympics open on Friday because of Loroupe's positive test. Team members are expected to start departing in the next few days, but Loroupe is expected to stay behind, according to the sources, who requested anonymity because they weren't authorized to reveal medical information.

The International Olympic Committee issued a statement several days ago and said only that an unnamed “official” returned a positive test in the Refugee Team delegation. It said the 26 athletes in Doha and other officials had tested negative.

Loroupe's positive test is one in a long line of athletes, team officials, and others who have tested positive for COVID-19, in and around the Tokyo Olympics that are to open on Friday after being delayed a year by the pandemic. Tokyo organizers confirmed on Sunday that two athletes staying in the Olympic Village had tested positive. They are the first athletes in the village to be reported positive.

Anne-Sophie Thilo, a press spokesperson for the team, declined to name the person who tested positive, but said most of the team will be in Tokyo in the next few days.

“If everything goes right, the whole team of athletes and coaches will be in Tokyo on the 20th (Tuesday),” Thilo told the AP.

The Refugee Olympic Team has been heavily promoted by the IOC, a humanitarian gesture that was introduced five years ago at the Rio Olympics in the form of a 10-member team. The team for Tokyo is to be twice as large and has been the focus of promotion, partially to counteract opposition in Japan to the Olympics and generate some goodwill.

The IOC would not confirm it was Loroupe that tested positive.

“You will appreciate that we are not in a position to provide names without the approval of the individuals concerned,” the IOC said in a statement to the AP. “However, we can confirm that the team members are able to train in Qatar, and we are looking at the next steps. We will provide information once decisions have been taken.”

In a statement earlier in the week, the IOC said the official who tested positive was isolated by Qatari public authorities and is considered asymptomatic.

The Qatari government did not immediately respond to a request for comment. Qatar, a tiny, energy-rich country on the Arabian Peninsula of 2.8 million people that will host the 2022 World Cup, has reported over 223,000 cases of the coronavirus and nearly 600 deaths.

Loroupe is a two-time winner of the New York City marathon, and in the late 90s she was a force from 10,000 meters through the marathon distance.